Cucumber Beetle Battle: How To Rid Your Garden Of These Pests 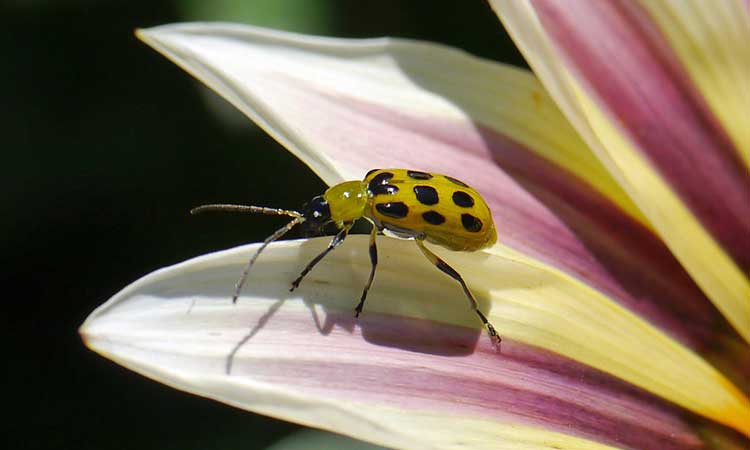 The last thing you want to see in your yard is a cucumber beetle.

No, really, I’m not kidding. If you are starting to see these little beetles scattered around your garden, that is a major problem. The larvae have a tendency to gnaw on the roots of your plants, and the adults chew on the foliage. Even worse, they spread plant disease.

The cucumber beetle falls into two separate insect genera, the Diabrotica and Acalymma. Both are part of the Chrysomelidae family of insects, which encompasses many of the beetle species. While there’s a number of different species in each genera, we’re going to focus on common food pests.

One thing to be aware of is that nearly all types of cucumber beetles can transmit plant diseases. The most commonly-spread are bacterial wilt and the cucumber mosaic virus. So it’s essential to get rid of these before they eat or poison your plants!

In its larval form as the western corn rootworm, Diabrotica virgifera is one of the most destructive insects to corn crops in the U.S. It ranges from the southwestern edges of the “corn belt” all the way to the eastern coast. It also has spread to and throughout Europe, causing major issues in a number of countries there.

As an adult, Diabrotica vergifera is still quite damaging in that it continues to spread its species, and so it should be killed quickly once identified. Keep an eye out for this black and yellow beetle and strike back quickly!

This species also has multiple subspecies classifications. Those are:

These are also major agricultural pests and should be destroyed quickly. These impact a wider variety of crops than the western corn rootworm does. These can be problematic on a number of cucurbits, beans, and more.

One thing that all three subspecies has in common is their coloration. This yellow beetle with black spots may have a different number or placement of their spots, but otherwise they’re similar in their looks.

Known in South America as vaquita de San Antonio. The cucurbit beetle not only feasts on cucurbits but on beans, grapes, and potatoes too. It’s primarily located in and around South America, and is a major agricultural pest in that region. While it’s prettier than some of the other cucumber beetle types, it can be quite destructive.

The banded cucumber beetle is spread from the United States all the way south to Colombia and Venezuela. It has an extremely wide range of foodstuff. Some foods are cucurbits such as cucumber, melons, squash, and gourds. It also eats some cruciferous vegetables like cabbage, some nightshades such as tomato and potato, and more.

This cucumber beetle is not as prominent in the northern United States as the weather there is simply too cold for it to thrive. However, in the southern half it’s become relatively widespread since its appearance in the late 1920’s.

In the other genus which comprises the cucumber beetle population, we have the striped cucumber beetle. This is a severe pest for crops in both larval and adult phases of life. It feeds primarily on cucurbits. .The adult form prefers older plant foliage. The larvae attack the root structure of the plants from within the soil. This cucumber beetle is primarily found in North America, specifically the central and eastern portions of the United States.

This close relative of the striped cucumber beetle is a variation which tends to stay west of the rest of its family. It has lots of similarities in terms of food crops. This might have been an evolution that prefers the hotter western climates.

Adult cucumber beetles mate when they are roughly a week in age. Roughly two weeks later, the female of the species will begin to lay eggs.

Depending on the species, cucumber beetles lay eggs in a variety of places. Generally, they prefer either the underside of leaves or flower petals for their laying area. Some species lay in large clusters every few days. Others opt to lay a few eggs every day.

When the eggs hatch, larvae emerge. These rootworms are tiny initially, but grow to reach sizes of a quarter to a half inch in length. Growth happens in a series of larval cycles called instars, and there are 3-4 of them for most species. Once emerged, the larvae will tunnel into the soil at the base of their plant to attack the roots. This gives them some protection as they feed from any predators which might otherwise eat the larvae.

Once the larvae have grown over a period of a few weeks, they will pupate in the soil. When pupation has concluded, the adult will emerge and begin the cucumber beetle life cycle anew.

Adult cucumber beetles are able to travel for short distances, and can slowly migrate throughout an area. Once a cucumber beetle has found their ideal home, they tend to stay there for a while. Typically, this home is in an area where there is a plentiful supply of their preferred foodstuff.

Different beetles inhabit different areas depending on their species. Some species are incapable of overwintering (usually the warmer-climate species), but there’s a few cold-weather varieties that do. These enter a state of diapause in compost piles or under soil. That’s almost like a state of suspended animation. Once warmer weather has returned, the adults emerge to continue life as normal.

What Do Cucumber Beetles Eat?

Other than the obvious cucumbers which they’re named after, cucumber beetles tend to be fond of cucurbits and corn as their primary crops. However, depending on the variety, the following plants may be impacted:

How To Get Rid Of Cucumber Beetles

Obviously, it’s important to eliminate these as fast as you spot them. Right now, you’re probably asking how to get rid of cucumber beetle infestations in your garden. Read on as I tell you not only how to kill cucumber beetles, but how to make your garden less of a target!

There are a variety of pyrethrin options that have an effect against some varieties of cucumber beetles, with varying levels of efficiency.

Start out with a blend of pyrethrin with potassium salts of fatty acids. This is a good overall solution, and is also effective against leafhoppers, asparagus beetles, tomato hornworms and more.

If that doesn’t work, you can move on to a blend of pyrethrin and canola oil. Oils tend to deter pests from taking up residence in your plants. They have the added bonus of smothering any eggs which are already in place. The oils also break down slower, which protects your plants longer. Take Down is also an effective miticide if you’re having problems with spider mites. It also works against the host of other insects mentioned above.

Finally, if you want to give pyrethrins one more shot before moving onto something else, you can go for a strong solution of a pure pyrethrin spray option. Just blend it at the highest maximum recommendation on the label for your types of plants.

Some cucumber beetles are resistant to pyrethrins, so it’s good to have an alternative. In this case, I would recommend a spinosad spray.

Cucumber beetles are notorious for being difficult to control with insecticidal options. If none of these work, concentrate on environmental and preventative options. But if they appear despite all of your other efforts, strike quickly to keep them from breeding!

Your first stage in environmental control should always be to encourage beneficial insects that prey on your pests.

To do this, you’ll want to plant flowers or herbs that encourage ladybugs and lacewings to stick around your yard. These two insects will happily consume the eggs of cucumber beetles. They’ll also eat any newly-hatched larvae they might encounter.

Don’t neglect to add a protective force to your soil as well. Beneficial nematodes will attack larvae that might get under the surface of the soil, killing them quite effectively. A healthy population of beneficial nematodes in your garden beds will eliminate most pest larvae.

If the beneficial insects aren’t working, try planting some trap crops. These should be plants that cucumber beetles are especially fond of. You will be effectively sacrificing these plants for the chance to kill the beetles, so don’t expect to get much of a harvest from them. When the beetles start showing up on those plants, hit them with an insecticide option to wipe them out fast.

Speaking of traps, if you’re in the western US, you may have some good results from commercial lure traps. Many use a pheromone lure that attracts several of the cucumber beetle varieties in the western United States, paired up with a sticky trap that the pests can’t escape from.

Before you plant, look for specific plant varieties that are resistant to cucumber beetles. If you already know that there’s cucumber beetles in your area, you might as well try those varieties. But realistically, your best bet is to keep them from ever reaching your plants in the first place!

Treat your plants to a dusting of kaolin clay. This superfine clay leaves a film behind on the leaves of plants which insects don’t like to lay eggs on or eat.

Using floating row covers, works extremely well to keep adult beetles from reaching your plants. If they can’t get to the plants, they can’t lay eggs on them! You will either need to hand-pollinate your plants or remove the row covers when they flower. Otherwise, bees won’t be able to reach the plants either.

There has been some research into using vermicompost as fertilizer instead of using more traditional slow-release chemical fertilizers. So far, it’s showing that the striped cucumber beetle is less likely to strike plants grown in a vermicompost-rich plot. Researchers believe that this may be resulting from an increase in phenolic compounds in plants grown with vermicompost. Since vermicompost is a great option as a fertilizer, it certainly can’t hurt to try it!

Q: These beetles just aren’t going away, no matter what I do.

A: There are some varieties of cucumber beetles that are stubbornly determined to live, no matter what you do. The striped cucumber beetle is among those. It tends to be resistant to a lot of organic measures. In those situations, it’s best if you do some trap crops to try to lure the beetles to those. Then, hit those plants with a more potent chemical insecticide when they show signs of cucumber beetle damage.

Other than that, hand pick and dispose of any beetles you find. Also, make sure you hang VivaTraps or other commercial sticky traps around your plants to catch the ones you don’t get.

Q: Is there anything else that I can try that you haven’t mentioned yet?

A: There is one last option, but it’s only really useful in areas with a long growing season. You can do a delayed planting for anything the cucumber beetles in your area are most likely to eat. Wait until after the first burst of cucumber beetles would normally emerge after overwintering. Once the adults have moved on to better grazing areas, plant your plants. Place floating row covers over them when you plant to prevent their return.

You may need to hand-pollinate your plants if using this method. But this may be the best chance to be sure there aren’t any beetles lurking beneath your row covers.