Skip to content
Epic Gardening is reader-supported. When you buy through links on our site, we may earn an affiliate commission. Learn more
Organic Pest Control 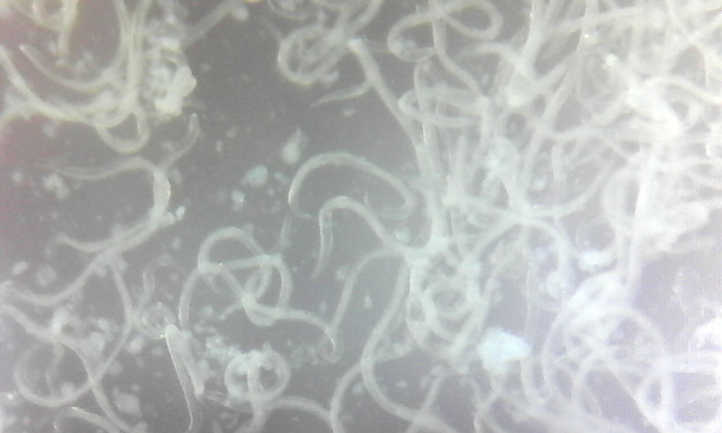 Grubs, thrips, beetles, moths—gardening can be a headache sometimes! But it doesn’t have to be. If you haven’t tried beneficial nematodes before, you should consider doing so! You’re fighting nature with nature when you use beneficial nematodes, so it’s an entirely organic method that poses minimal risk.

There are a few nematode species that won’t harm you, your pets, or your crops, so you can feel good about using them! You can refrigerate them until you need them and apply them to your garden and houseplants with water, so they’re super easy to use.

Let’s get into what beneficial nematodes are and how you can utilize them in your gardening efforts to deal with fewer pests!

What Are Beneficial Nematodes?

What’s a nematode, anyway? These beneficial insects are a type of microscopic roundworm that lives in the soil and uses insect pests as its food through its lifespan. You may think that roundworms aren’t safe to use, but the kinds that are beneficial and used for pest control can’t hurt you like a few worm species that infect people and animals, nor will they hurt your soils or plant matter. Even if you come into contact with them, you’re completely safe.

Beneficial nematodes are rightfully deemed beneficial because they target pest types that we don’t want to encounter such as insect larvae, caterpillars, white grubs, and more. One application of nematodes will make a dent in pest populations if the conditions are right: the soil moist, not too cold or too hot, etcetera. Two applications spaced within two weeks of each other will ensure your nematode species of choice will have enough age variability to continue to breed and thrive, all while feasting on pests in your soil.

Most nematodes are applied to the soil surface because they prefer dark, moist conditions and they’ll find those at or below the soil surface. Still, there are a few species that can survive being sprayed on plant leaves. Since specific species behave differently and have different target pests, you can use them to target pests in different areas of your garden to get better results.

Soil-dwelling beneficial nematodes have become more prevalent in gardens in recent years, but they’ve been used as biological pest control for over fifty years. They’re likely to get more popular as time goes on since more and more people are turning to organic gardening methods. No chemicals are used with nematodes—it’s just little critters attacking bigger critters!

Since nematodes are microscopic, you won’t be able to see their life cycle or the changes that they undergo, but it’s still an interesting process to know about. Like other bugs, nematodes have three basic stages: egg, larva, and adult. There are four individual larval stages, and it’s during the third larval stage when they find an insect host to claim as their own. Most species enter through the mouth of the target pest or another opening, while some species will pierce the exoskeleton and enter through it.

Once the nematode larvae enter their target pests, they spread bacteria from their guts inside the host insects. This bacteria starts to break down the insect pests’ tissues. The nematode larva then eats the bacteria-infected tissues, and the host insects die. Nematodes can destroy hosts very quickly, and can lay eggs while living inside the host and continuing to feed. Depending on the host, a nematode may be able to create one or two more generations while living inside an insect!

There are many types of nematodes out there, but only a select few are used for pest control in the garden. Some nematodes are parasitic and aren’t safe to use around humans and pets, while others eat plant matter, such as root-knot nematodes. Happily, the beneficial nematodes will act as pest control agents against these harmful nematodes, too!

Let’s consider some of the different varieties of these nematode good guys and what prey they choose as host bugs!

Steinernema feltiae, usually marked as Sf on product labels, is mostly used outdoors and in greenhouses. It’s good to use on indoor plants as well since it can eliminate fungus gnat larvae, which is one of the most common pests for houseplants. Sf is one of the most common beneficial nematodes that you’ll probably easily find in your local gardening center, and one of the control methods with nematodes that people are used to.

Heterorhabditis bacteriophora (Hb) is another common nematode product that you should find readily available. It’s often used outdoors in lawns, gardens, pastures, fields, and orchards. If you have ant and Japanese beetle problems, you’ll want this kind on hand to help eliminate or control pests.

Steinernema carpocapsae (Sc) is the third most common type of beneficial nematodes. This one is typically used to control fleas, so it’s ideal if you have pets that spend a lot of time outdoors. You can use it on lawns, landscapes, fields, orchards, and it can also be used on indoor plants.

Sk is typically used in places that have cooler weather, so it may be hard to find in certain parts of the US. It’s often used outdoors or in greenhouses and is used to treat most weevils, including black vine weevils, sawfly weevils, and filbertworms. Although they have a preference for weevils as prey, they are incredibly effective and are worth having on hand if your area is prone to weevil infestations.

Sr is another beneficial nematode that isn’t as common as the first three we mentioned, but it’s still worth using if you can buy it. It’s typically used on orchards since it will target pests that are drawn to citrus plants, but also is effective on some lawn pests.

Using Beneficial Nematodes In Your Garden

Once you know what kind of nematodes you can use in your garden, it’s time to put them to use!

The first thing to know is that nematodes have a relatively short lifespan and will need to be used soon after purchasing them. Fortunately, they can last a few weeks if stored properly. They can’t survive super cold temperatures, so don’t allow them to freeze. Store unactivated nematodes in the refrigerator immediately once you buy them, as the cold keeps them in a state of stasis.

Follow the directions on the package to wake them up into activated nematodes and to apply them to the soil surface. Most nematode products will be applied the same way, but be sure to read the application instructions just in case! Activated nematodes are applied with water. You can mix them with water in a watering can or use a hose-end sprayer for larger areas. If you don’t activate the whole batch at once, store nematodes in the refrigerator to keep them dormant until you apply them to the ground surface.

If you’re not sure how much you need to cover your plants, fill up a watering can, water your garden, and see how much you have left. You can adjust how many nematodes to use with this method. If you’re using an end hose sprayer, add a few drops of food coloring to the sprayer and water your garden. Once the food coloring is diluted enough that it’s gone, calculate how much of your garden you covered and use this information to measure how many nematodes to use. Generally speaking, 5 million nematodes will cover 1,600 square feet, but if you’re using a blend of nematodes to handle multiple types of insect pests, you may want to spray the soil more thoroughly.

The best time to apply nematodes will be early in the morning or right before dusk. Warm temperatures and direct sunlight can kill beneficial nematodes, so doing it when the temperatures are cool and there isn’t any direct sunlight will give you the best results and give your nematodes time to take shelter in the moist ground surface. Soil temperatures should be above 40°F and below 95°F to ensure the nematodes survive. For optimal results, apply in spring or in the early fall. If you live in a climate where freezes are common, apply in spring and skip the early fall application.

When you’re ready to apply nematodes, water your garden thoroughly first. Nematodes travel easily in water, so Keeping the soil moist will make it easier for them to move which will in turn make the application more effective. It will also bring pests like white grubs or other insect larvae toward the surface, making it easier for the nematodes to locate their new hosts. Apply the nematodes according to the label directions, and follow that with another watering to help them into the soil.

You’ll need to apply nematodes in all the areas you want them since they can’t travel far distances on their own. They’re microscopic and only travel short distances that will allow them to find a host. If you spray one location, don’t expect them to move to another area on their own.

Beneficial nematodes usually survive for up to 18 months or until winter weather consistently brings the ground surface below freezing. Note that you will need to keep the soil moist to ensure that your nematodes continue to thrive and keep going after pests. Soil moist enough to feel damp to the touch is fine, but you don’t need it to be super-saturated or muddy.

Using beneficial nematodes to treat pests on your houseplants isn’t much different than using it outside. You’ll just be using much smaller quantities unless you have an indoor jungle! Even so, you likely won’t be using an entire package of 5 million nematodes, so you may want to consider splitting a package between indoor and outdoor plants if you have both.

SF will likely be the best option for you to use since it can kill annoying fungus gnats, one of the most annoying pests in the home, but SC is also a good choice because it can kill fleas and cockroaches. Other pest pupae that linger in potting mix can also be kept in control this way.

As with other forms of nematodes, keep the soil moist in the containers you have introduced them to. Keeping that ground surface damp ensures they’ll continue to thrive and to attack pests in your containers. If you don’t use them all, store nematodes in the refrigerator and apply them for pest control elsewhere within a couple weeks.

A: When used correctly, beneficial nematodes live up to their name and can eradicate entire pest populations. They’re living creatures that require certain temperatures and moisture levels, so you’ll need to keep those in check to get the best results.

A: They can last up to 18 months in the soil if the conditions are just right. They can’t survive in temperatures outside of 40-95°F. Store unactivated nematodes in the refrigerator for two or three weeks, but do not freeze store unactivated nematodes. Once woken up from their hibernation, for optimal results use these immediately in pest-prone, moist areas to help control pupae or other pests that they use as hosts.

A: Beneficial nematodes won’t target earthworms, but a few species of earthworms are susceptible to becoming infected by the bacteria nematodes release if they come into contact with it. Generally speaking, you won’t have issues with the bacteria lingering in the ground; the nematodes that are good guys aren’t out to hurt your other beneficial critters!