Skip to content
Epic Gardening is reader-supported. When you buy through links on our site, we may earn an affiliate commission. Learn more
Tubers, Vines, Vining Vegetables 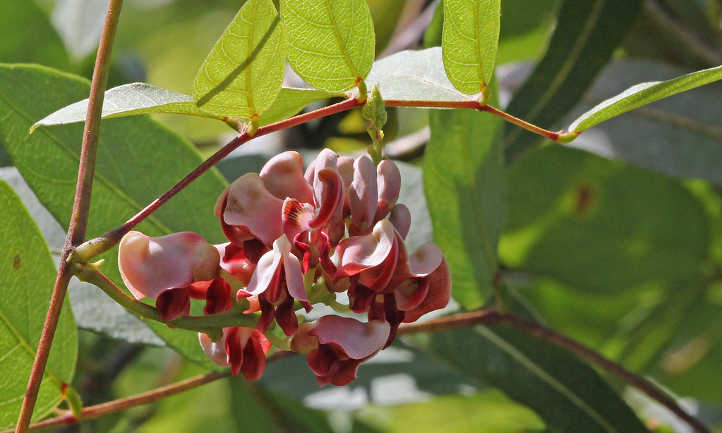 Do you love tuberous-rooted plants? Me, too. And when I first discovered Apios americana, I was fascinated by it. How have we missed this tasty little tuber for so long?

Known commonly as hopniss, American groundnut, or many other names, this vining plant is a perennial. A relative of peas, its vines can reach ten feet long. The flowers it produces are similar in appearance to those of wisteria.

But it’s the tuber which is most fascinating to me! Hopniss was a staple food of many Native American tribal groups. The first European arrivals to the American shores also took sustenance from them. Described as like a potato with a nuttier flavor, they’re said to be quite tasty!

So let’s talk about this fascinating vine. Whether you grow it as a vining ornamental or a food crop, Apios americana can be a great addition to your garden!

All About The Potato Bean

A native of the United States, groundnut can be found in every state east of Colorado. It’s most common in the eastern US. Heat and drought are likely why it doesn’t fare as well in the desert southwest.

Long, leafy vines can grow to reach heights of ten feet. While these can trail along the ground and form a ground cover, many prefer to trellis them upward. The leaves are teardrop-shaped and bright green. Leaf stems extend off a main stem, as do the flower racemes.

The flowers develop in clusters which resemble wisteria flowers. Purplish-brown in coloration, these are quite beautiful. They flower throughout the summer months, with blooms fading in the fall.

Root structure for these plants is fascinating! The tubers form in a long rhizome, each one attached to the next. They are often described as beads on a string, as you’ll find each tuber connected by a very slim bit of rhizome. When harvested, the smaller tubers are often saved to start the next year’s crop. Larger ones can be replanted or cooked and eaten.

From the flowers develop seed pods as well. The seeds are unreliable germinators, but immature seed pods can be cooked and eaten. They’re said to be somewhat like green beans.

Technically a legume, the American groundnut is a nitrogen fixer. In some northern regions, it’s interplanted with lingonberries. This creates a balanced and sustainable feed system for both plants.

While portions of this plant are edible once cooked, it’s not farmed in the United States. In fact, the only country that commercially farms it is Japan. There, it’s called America-hodaimo and is raised similarly to the native Japanese hodaimo (Apios fortunei).

It’s quite likely that the lack of commercial cultivation in the USA is based on slow growth. Potato bean tubers can take two to three years to reach full size. By contrast, a normal potato is a much faster grower. But historically, it was used by tribal people as a primary staple food.

Many Names, One Tuber

This plant has a wide variety of names, all in regular use.

Most often, it’s best known as the American groundnut. Historical documents mention the groundnut consistently, and that name has become habitually used.

The name hopniss, sometimes spelled hapniss, is said to originate from the Lenape tribe. Interestingly enough, the name means ‘potato’ and is meant to reference normal potatoes. The Lenape themselves call the Indian potato “tekëneipën”. Still, the name hopniss persists, if only because people assume it means something other than just a regular potato!

Amongst tribal people, this crop was harvested as food. It appears to have had its widest usage in a reversed L-shape from the Dakotas eastward along the upper part of the US. It then spread south from Maine to Florida. Tribes outside of this L-shape also used the vine, just less frequently.

Because of its frequent use by tribespeople, it also gained the name Indian potato. Other common names include potato bean (in reference to the edible seed pod), America-hodaimo (by the Japanese), and cinnamon vine.

Apios americana is a fairly easy grower. It’s predominantly a wild plant rather than a cultivated one, so once planted, it does its own thing. It’s a common sight in wilderness areas in the eastern US, in fact. But in gardens, there are some ideal conditions to strive for!

In its native range, the potato bean loves the sunlight. Full sun conditions are ideal in zones 3-7, and it’ll be perfectly happy there.

In areas which are outside its normal growing zones, it can still appear. But in these locations, partial shade is best during the hotter times of day. Areas like Texas, where it occasionally grows, are a good example of this.

Temperature-wise, it can tolerate up to subtropical heat levels during the summer months. In the winter, tubers buried in the ground under mulch will survive even in snowy areas. The tubers can also be harvested in fall and stored over the winter, then planted out in spring again.

Moist to wet soil is preferable for American groundnut. It requires lots of water to keep those huge vines green. Since the vines provide the energy that’s used to form tubers, they’re essential!

In many wild locations, the groundnut develops in woodlands or along waterways. These locations provide ample soil moisture and collect leaf debris as natural mulch.

Gardeners should water whenever the soil begins to dry out. Be sure excess water drains off readily, so it doesn’t pool. But keep it damp enough that your plants aren’t lacking moisture.

Sandy loam is perfect for this plant. It’s loose enough to allow easy tuber and root penetration, but allows for drainage. The loam retains just enough water to keep the plants happy.

For these, mulching is a necessity. Since they don’t like to dry out at all, be sure there’s plenty of organic material in and on your soil. This will prevent soil moisture evaporation.

While container growing is an option, choose a fairly large one to allow for tuber growth. Stick with one plant per container, and add extra compost. Ensure you water these consistently, as the soil is more prone to drying out in containers.

It prefers acidic to neutral soil. Aim for pH ranges between 5.1 and 7.0.

Indian potato plants are nitrogen fixers. Like soybeans, they replenish the nitrogen supply in the soil around them. They can maintain at this level for a long time without the need of fertilizers.

Some studies are showing that for tuber cultivation, fertilizer may still be useful. The extra plant food helps plants to develop larger tubers, making them more valuable as a crop.

So, while you don’t have to fertilize, you can if you’d like. Small amounts of fertilizer during the plant’s active growing phase can help. I’d recommend to keep it diluted or slow-release, rather than anything heavy. Fertilizing once or twice during both spring and summer should be plenty.

The easiest way to propagate groundnut plants is through division. It doesn’t need to be an entire string of tubers separated from the mass. A single tuber will suffice, or you can use multiple still connected together. Use sterilized pruning shears or a sterile, sharpened shovel blade to cut them apart.

When separating tubers, make note of which end of each tuber was farthest away from the parent plant. I like to use a rubberband to mark that end of the tuber or tuber string segment. When replanting in spring, that end will be where the plant’s shoots and the rhizome-like string of tubers forms.

Tubers can be harvested in fall and stored until spring. Place slightly-damp soil into a plastic bag. Bury the tuber in the soil. Make sure there’s a couple holes poked in the bag above the soil to allow air to reach the tuber. Store in the refrigerator until the ground thaws, then replant.

Apios americana seeds are available, but they’re not reliable. They should be scarified (rubbed with sandpaper to scratch the hard surface) and soaked for at least 3 hours before planting. It can take a while for them to germinate, if they ever do. Germination rates are low for these seeds.

It’s possible to take cuttings of the healthy main vine and use that to start a new plant. Dip the cut end into water and then a rooting hormone powder. Place into lightly-damp potting mix and keep the humidity up around the cutting. Place it in a location that doesn’t get direct sunlight, and check for roots in a month or two. Be sure it always has damp but not soggy soil for best results.

While not an invasive plant, the vines of the Indian potato sure can grow like one! This is especially true if you have more than one plant in a given area. You can prune back the tips of the vines to reduce their height.

It can be beneficial to train your American groundnut plant to a trellis. This will make it more manageable and easier to keep from spreading out wide. Weave vines through a larger trellis, or use tomato ties to secure the vines in place.

You’re not likely to encounter severe issues with your wild groundnut plants. They’re quite resilient and take care of themselves. But every so often, the unexpected occurs. Let’s prepare you for what might happen.

While these perennial plants can survive frost, their greenery can’t. It’s quite common for the vines to die back in frost conditions. In the spring, they’ll come right back to life as long as the roots are protected beneath the soil. A three to four inch layer of mulch can keep it warm enough to shield the roots.

Over-watering is possible, but it’s not common for these plants. As long as your soil drains off excess moisture, you should be okay.

Surprisingly, only some forms of nematodes are likely to attack Indian potato plants. It tends to be mostly pest-resistant. Add beneficial nematodes to the soil to defeat the baddies!

It does attract deer, but they don’t tend to eat much of these when other plants are around.

Gophers and mice may become problematic. They will dig for the rhizomatic strings of tubers. If you start to see your plants suffering yellowing or dieback, look for evidence of digging nearby.

As a perk, what this plant really attracts is beneficial insects. Lacewings are particularly fond of hopniss plants. Planting some of this may help you with the rest of your garden, as long as you keep its growth contained!

Currently, no diseases are known to affect American groundnut. This is likely because it mostly grows wild in the United States. There haven’t been significant disease issues in cultivation.

Q. What color are hopniss flowers?

A. They’re a purplish-brown color. The inside of the petals is the darkest part. The underside/outside tends to be paler, ranging almost towards a lavender tone.

Q. How deep should I plant groundnut tubers?

A. Plant the tuber 3-4 inches below the soil’s surface.

Q: Why is my American groundnut not producing seed pods?

A: There are two levels of groundnut plants: diploid, and triploid. Diploid plants, usually found in the warmer, southernmost parts of their natural range, produce seed pods. Triploid plants do not, as they’re sterile. If your groundnut isn’t producing seed pods, it’s likely a sterile triploid.

Ready to rush out and find your own apios americana? Me too. Ornamental flowers, stunning vines, edible tubers and seed pods… this fantastic plant has it all!