What To Feed Worms For Epic Vermicompost 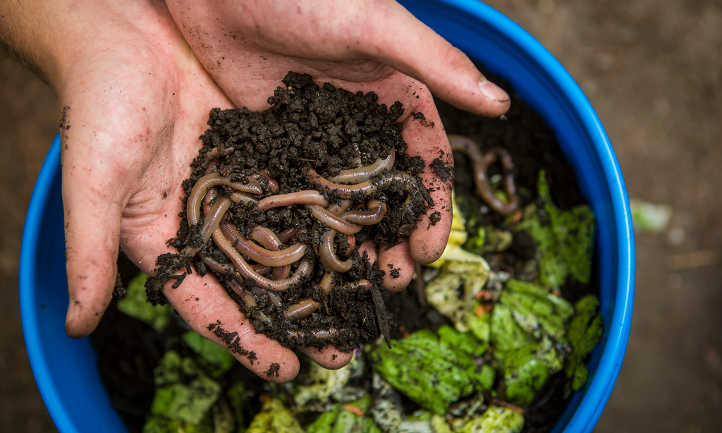 Are you baffled by what to feed worms to produce great compost? Most people new to worm composting are at a loss for what goes in there, other than the obvious vegetable scraps or melon rinds.

But like all compost, what you put into it will change what the finished compost’s quality is. So let’s go over a short list of what to feed worms to supercharge your worm poop and feed your plants!

What To Feed Worms From Your Kitchen

Almost all fruit and vegetable scraps are fantastic choices for worm feed. But a few are tricky.

Worms will eat citrus rinds, but too much citrus can cause skin irritation for them. It’s best to pre-compost your citrus in a standard compost bin or compost spinner.

Onions and other alliums like leeks often get ignored until they’ve broken down a bit. This means they can make your worm bin smell. Like citrus, it’s best to pre-compost these another way!

When making quality worm feed from fruit and vegetable scraps, I like to make a puree or slurry. Remember, worms have tiny mouths. Pureeing your table scraps will make them easier to eat, which means the worms will eat more of them!

What about other kitchen scraps? Leftover cereal grains are great worm food. So are coffee grounds and tea leaves. Cooked rice is great too.

I generally avoid adding meat or dairy products to my vermicomposter. This isn’t because the worms won’t eat them. It’s because they tend to smell really, really bad before they’re consumed. For these, stick to bokashi composting.

Don’t overfeed your worms too much fresh stuff. That can create problems in your worm bin. Balance out your feedings with additions of fresh, carbon-dense bedding materials.

Having extra surface space and depth in your worm bin can allow your population to expand. So too does extra airflow in the bin. Using an Urban Worm Bag gives you plenty of surface space, excellent depth, and provides that all-necessary air to keep your bin from getting too soggy. If the worms are happy, they’ll eat more — and you’ll have better results!

Fattening Up Your Worms

Knowing what to feed worms for fishing will help you to fatten them up quickly for bait! But even if you’re just using them for the fantastic compost, it’s a good idea to fatten yours up. The bigger the worm, the more it’ll eat. The more they eat, the more they poop black gold!

Many commercial worm farms use a dry worm chow to do the job. In fact, there’s multiple commercial worm chows available. I used to joke about Purina Worm Chow until I found out that it actually exists.

You can make a homemade worm chow easily by combining just a few dry ingredients. My favorite recipe is as follows:

Take the rolled oats and cornmeal and blitz them in a coffee or spice grinder until they’re finely powdered. Do the same with your eggshells. Then mix all the ingredients together well, being sure to incorporate them thoroughly.

The eggshells and azomite provide the essential grit that the worms need to digest food. They don’t have teeth, so this grit is absolutely necessary! Eggshells also provide a calcium boost which helps the worms to breed. Azomite provides ample trace minerals.

The rolled oats, cornmeal, and alfalfa work together to plump up your worms quickly. The finer this mix is powdered, the quicker your worms will eat it up and fatten up. Moisten your worm bedding and then sprinkle it over the bedding surface.

A worm feed like this is helpful to keep on hand for those times when you don’t have a bounty of fresh kitchen scraps available.

What Else Will Worms Eat?

Remember, worms aren’t limited to the same things that we eat. They also consume their bedding, any other plant material, and so on.

If it’s the dead of winter and you’re low on fruit and vegetable matter, and you’re out of homemade worm feed, don’t fret. Here’s another list of options for you!

If you don’t have crushed dry eggshells or azomite around to add grit for your worms, used coffee grounds will work in a pinch. Diatomaceous earth can also work in small quantities and will slow down other bugs from developing in your worm bin. You can also add a handful of fine sand or dry topsoil to your worm farm.

Remember, grit is necessary to speed their digestion process so they can eat more and break down your waste products. Be sure to add a handful whenever you replace the bedding or remove compost.

So when you’re torn on what to feed worms, feel free to refer to this list for inspiration. There’s so much more that they can eat, but you’re not limited to your kitchen scraps. And if you, like me, love having quality vermicompost, this will help you produce it year-round with ease!