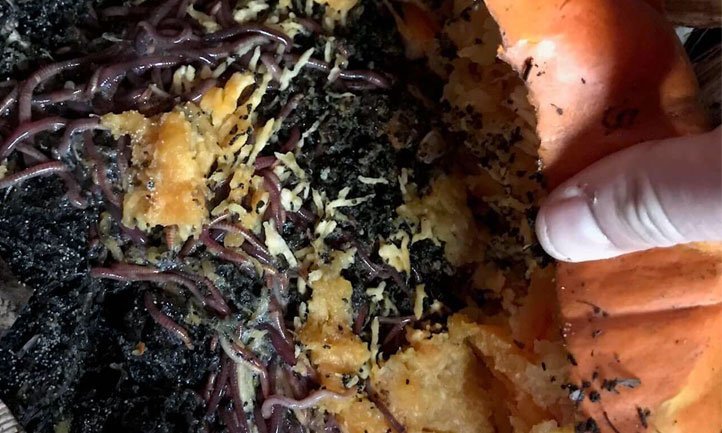 The first step in successful vermicomposting is keeping the worms alive, reproducing, and recycling your food scraps and organic waste into worm poop, or beautiful worm castings. The second step involves how to harvest worm castings, ideally while disturbing the worms as little as possible, yielding you a relatively worm-free humus.

Let’s discuss harvesting castings, so you can put this “black gold” to good use in garden soil, around fruit trees, and in seed starting mixes. You’ll experience plant abundance as a result.

But first, it helps to understand the basic tendencies of worms in their responses to food, moisture, and light.

How Earthworms Respond to Food, Moisture, and Light

As you may already know from our types of composting worms article, our wiggly friends of the epigeic variety (most often red wigglers) will work in the top layer, at about 6-8 inches of compost, leaf litter, or lightly-packed soil.

This is even more true when there is a rich food source on the surface of the vermicompost. It is absolutely ridiculous to watch how worms respond to pumpkin, cantaloupe, watermelon, or most other members of the curcurbit family. The fairly rapid decomposition of these fruits creates a blooming microbe population that the worms find very tasty.

While the worms are attracted to the all-you-can-eat microbe buffet, they are also attracted to moisture, which is why a poorly-ventilated and overfed worm bin will have excess moisture pooling at the bottom….and lots of worms hanging around.

But one things all earthworms hate is sunlight. They will do whatever they can to avoid bright lights.

Knowing what the worms find attractive – and what they find repellent – will help you in your ability to separate your worms from your worm castings, and vice versa.

Manually sorting thousands of worms (there are about 1000 red wigglers in a pound) from vermicompost is certainly possible – and most definitely tedious!

Some hardcore vermicomposters find sorting worms to be a pleasant way to spend hours on end, sort of like knitting. But if plucking worms from their poop with your own hands isn’t your cup of tea, try one of the methods below!

This method is also more about removing the worms from the vermicompost rather than harvesting worm castings, but it’s all the same.

By intentionally not feeding the worms for a couple weeks and then giving them a rich, quickly decomposing fresh food like pumpkin on the surface of their worm bin, you can get the hungry worms to congregate near the moist food source.

Wait 24 hours or so and simply skim the top 4-6 inches of worm-rich vermicompost out of your worm bin. What’s left won’t be pure worm castings as it is likely to have some unprocessed material in it, but unless you’re selling your worm castings to picky customers, having a vermicompost that looks like ground coffee isn’t that high of a priority anyways.

Another hack for using the bait method is to put some worm rich food waste in one – or several – onion bags and bury them in the top few inches of your vermicompost. (This also works better when you abstain from feeding your worms for a week or more.)

Come back a day later and pull your onion bags (which will be full of worms) out of your worm compost. Then spread the worm poop on your garden for plant abundance. Voila!

Worms are photophobic, a fancy of way saying they hate light. They will do their best to dig themselves back into darker environments.

I find the following method to be tedious, but also a little fascinating. It goes something like this.

To speed it up a bit, form an assembly line of vermicompost piles and work one pile at a time, letting the worms escape the light in the other piles.

Harvesting worm castings with a screen is the chosen method of most large-scale vermicomposters. Usually, larger-scale producers will run it through a slowly-rotating cylindrical screen to automate the process.

As somebody who owns and uses a JetSpeed Compost Trommel, I can attest that this is by far the quickest way I have ever harvested worm castings. It is also going to be the most traumatic for the worms.

Because the screens, normally made from either 1/4-in or 1/8-in hardware cloth, will only let fine material through to the catch below, almost all of your worms and the coarser material (called “overs”) will exit the end of the trommel.

However, commercial trommel harvesters are expensive at over $3000 and will be well beyond the needs of home vermicomposters.

There are lots of flat, manual screening solutions that DIYers have come up with. Kevin created a really cheap and easy DIY soil screener that can be used to screen worm castings as well:

Screening your worm castings like this is the best of both worlds. It’s inexpensive, easy to use, ergonomical, and can be made with off-the-shelf material at Lowe’s, Home Depot, or any other hardware store. It also screens an appropriate amount for a home vermicomposter.

Nearly every commercially-made worm bin – even the most basic worm bin – exists to make the harvesting process a little easier. Stackable plastic tray systems like the Worm Factory 360 assume the worms will climb into richer food sources in the trays above, leaving worm castings in the trays below.

To similarly leverage the upward migration of worms, but in a more aerobic environment, I developed the Urban Worm Bag, a breathable continuous flow worm bin that allows you to feed through the top and collect rich, lively, worm-free castings from the bottom. You can add them to add them directly to your garden with no risk of burning your roots.

No sifting, sorting, or screening. And adding new bedding is a cinch!

Q: How often do you harvest worm castings?

A: You can harvest worm castings every 3 to 6 months after establishing your worm colony. Then make a compost tea of them or add them to soil.

Q: How do you harvest worm bin castings?

A: There are a few different ways to harvest worm castings. Check out the four mentioned in this article, and you can get the Urban Worm Bag in our EG store!

Q: How do you separate worms from castings?

A: You can separate worm castings in multiple ways. See the piece above! There are several methods outlined.

Q: How long do worm castings last in soil?

A: Worm castings will last exponentially longer than regular soil and provide plant abundance in the process. When you add them to garden soil, either whole or in an actively aerated compost tea, they should provide nutrition for 6 times the average 2 to 3 year lifespan of regular potting soil.

Steve will be posting here about worms and worm composting more in the future. But if you’re interested in learning more, you can visit him at the Urban Worm Company for vermicomposting tips and tricks for the beginner as well as learning more about the business side of vermiculture and vermicomposting.