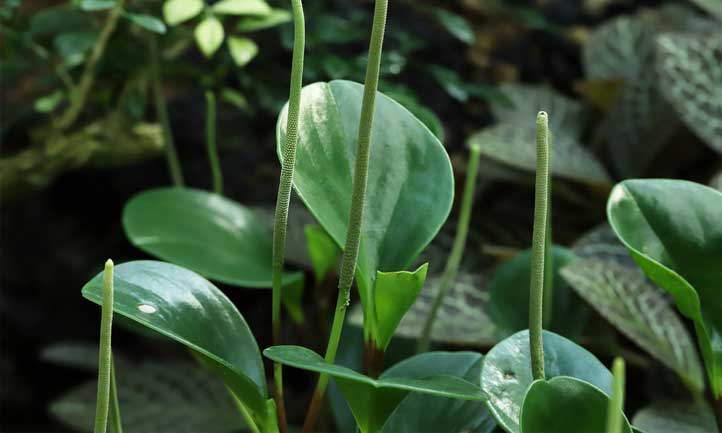 With its tropical origins, it’s no surprise that peperomia obtusifolia is popular. Often grown as a prized houseplant, the baby rubber plant loves its humidity, but can’t take cold temps. It’s surprisingly self-sufficient, and makes for a perfect green addition to your home.

Slender stems support fleshy, almost succulent-looking leaves. Whether it’s one of the multicolored varieties or all green, it’s quite a sight to behold. A perennial, it’s capable of living for years in the right environment. Inviting one of these beauties into your home is a joy!

So let’s talk about the “pepper face”, this sweet little gem amongst the varied peperomia species. We’ve collected all the tips you’ll need to grow your own. You’ll love the lush foliage it provides for you every year.

All About Pepper Face

Variegated peperomia, sometimes called pepper face, originates from Mexico down to northern South America, and also grows in parts of the West Indies. It’s popular now in Florida, Mexico, and the Caribbean – areas where the warmer climate is favorable.

This evergreen perennial can grow up to a foot tall and a similar width. Its flowers aren’t showy and are greenish white in hue. They grow on spikes that can reach five inches long.

The epithet obtusifolia means “blunt-leaved.” As such, it’s also referred to as blunt-leaved peperomia. But this lovely plant is most commonly known as baby rubber plant.

Gardeners have developed several cultivars over the years. Some have solid green leaves. Others have variegated foliage in shades of green with gray, gold, or cream-colored markings.

It’s possible to grow the baby rubber plant as a hanging garden plant, a low growing potted indoor plant, or as a ground cover in shade. Most opt for indoor conditions, as they’re a tropical plant and can’t take tolerate cold.

Why would this plant be called “pepper face”? That’s because of its visual similarity to Piper nigrum, the true black pepper plant. The shape and size of the leaves is quite remarkably similar. And indeed, peperomia is closely related to black pepper as part of the Piperaceae family. The botanical name “peperomia” even refers to it directly, as it’s taken from the Latin terms “peperi” (meaning pepper) and “homoios” (meaning resembling or similar to). So it’s unsurprising that it’s claimed to be “wearing a pepper face”!

There are multiple cultivars of this lovely plant available on the market. Let’s go over a few of the most popular ones and some information about each.

With Alba, new leaves first form as a creamy ivory color. This leads to its varietal name, a reference to albinism. Over time, the pale-toned leaves gradually turn green. It can maintain a bit of variegation on the leaves once they’ve matured.

One cultivar with two names. Distinctively grey-green leaf centers are edged with a silvery ivory. A waxy appearance to the leaf makes it stand out from other cultivars. This variant has a form which is petite in size, if not a true dwarf peperomia.

This is a true dwarf peperomia obtusifolia. Its growing habits and size are distinctly smaller than others of the species. Tending to stay rather compact, it’s a perfect houseplant. But it maintains all the appeal of its larger relatives!

Caring For Your Baby Rubber Plant

Looking for an easy grower? Pepper face is perfect! The baby rubber plant is very easy to care for as long as a few needs are met. Let’s explore those needs now.

Bright, but indirect light is best for your plant. While short periods of direct light are fine, too much full sun will cause leaf discoloration. Partial shade is your best bet, as it loves a bit of early morning sunlight before the heat of the day hits. If you don’t have a location with only early morning sun, avoid afternoon sunlight and instead opt for a bright location in your home.

Temperature is definitely a concern. The natural environment for your baby rubber plant is growing zones 10 and 11. At temperatures below 55 degrees, your plant will be chilled and suffer problems. Maintain an indoor temperature of 60 degrees and above, and it will be happy!

Consistent, light watering through the spring and summer months is important. Wait until the soil is almost dry on the surface before watering again, but don’t allow it to dry out completely. In the late fall and winter, you can reduce the watering frequency. It’ll need less during the cooler months.

Because its leaves hold a considerable amount of moisture, this plant is slightly drought-tolerant. Allowing it to dry out too often may cause damage to the leaves, but the occasional skipped watering won’t do much harm.

As the plant’s in its active growing phase, it loves high humidity environments. These environments mimic its natural jungle atmosphere. Placing this in a frequently-used bathroom is great, as it’ll love the steam from the shower!

But if you don’t want to adorn your bathroom with plants, there’s alternatives. Place a pebble tray beneath the plant, or put it near a humidifier. Avoid placing it in the airflow from a heater or air conditioning system.

Peperomia’s tolerant of most soils. Clay, sand, or loam are all optional. But it performs best indoors in a peaty potting mix with good drainage. Avoid soils that hold lots of moisture against the epiphytic roots. Too much moisture can cause root rot to form.

That tolerance spreads to soil pH as well. Slightly-acidic, neutral, or slightly-alkaline soils are all fine for your plant. In the wild it often grows in plant debris along jungle floors, so it’s tolerant of many soil types as long as they’re well-draining.

Aim for a balanced, but diluted liquid plant food every 3 weeks during the spring and summer months. Apply the fertilizer directly to the soil rather than the leaves to avoid leaf burn.

In fall, drop back to once a month feedings. Gradually increase the time between feedings to every month and a half in the early winter. They need less fertilization during those months of the year.

Stem or leaf cuttings are the best way to propagate baby rubber plant. They grow easily from both. Use a rooting hormone on the base of your cutting to promote quick root development.

Care for your cuttings as you would most other plant species. Our guide to cuttings can give you some pointers!

You can also prune off dead or dying leaves, but that too is mostly cosmetic. In the wild, this plant’s fallen leaves would form a mulch around its base. Over time, they’d break down and become part of the soil. If it doesn’t appeal to your aesthetic, you can remove these, but it’s not required.

Over all, your pepper face is pretty tough. But it may still encounter a few growing issues along the way. Let’s go over a short list of what might come up and how to handle it!

Overwatering may cause small blisters to form on the fleshy leaves. It can also lead to conditions that promote root or stem rots. Ensure your soil is well-draining and releases excess water. Avoid leaving your plant’s pot in standing water, as that can cause overwatering as well.

If the temperature dips below 55 degrees, leaf tips can begin to turn brown. The colder it becomes, the more pronounced this damage will be. Near-freezing temperatures will defoliate your plant and cause excessive damage. Keep it above 60 to keep your plant going!

Avoid placing your plant in drafty locations. Air conditioning vents can chill the plant’s leaves. Heaters can dry out the soil too rapidly and may cause wilting. A consistent temperature’s best for your peperomia obtusifolia.

The most common pest for these plants is spider mites. These irritating little pests suck the sap out of the fleshy leaves. For indoor growers, a product like MiteX is an excellent choice to kill these off. This blend of plant oils coats the mite eggs and prevents them from hatching.

Other sucking pests which may appear are mealybugs and whiteflies. These are somewhat more rare on your peperomia, but still can appear from time to time. Both can be treated with an insecticidal soap. If mealybugs persist, you can use a cotton swab dipped in rubbing alcohol to remove them from the leaves.

Phytopthora can become a problem if your soil is overly moist. This water mold fungus can cause both root and stem rots to develop. Plants can die from a variation of damping off due to these rots. To avoid this fungal disease, don’t overwater, and make sure your soil’s well-draining.

Phytopthora can also cause cutting rot, as can rhizoctonia and pythium fungi. If your cuttings never develop roots and instead fail, it’s best to dispose of infected soil. Start again with sterile soil, being sure to sterilize your pot and tools before you start. This prevents further transmission of these fungal diseases.

Peperomia ring spot is caused by a virus. This creates large brown circular markings on leaves. Younger leaves may be distorted in shape. These concentric patterns may create indentations in older leaves or become sunken.

This ring spot isn’t curable. The most common point of transmission is through infected cuttings. Once the soil is infected with the virus, it can spread to healthy plants. Use sterile potting medium, and ensure your cuttings are only from healthy plants. Destroy infected plants.

Finally, some reports of the grey mold called botrytis exist. This is most common in very humid environments. While botrytis won’t necessarily kill your plants, it can prevent photosynthesis. The spores can also spread to other nearby plants. Treat any outbreaks of botrytis with a copper-based fungicidal spray.

Here are some frequently asked questions about the baby rubber plants.

Q: Is my pepper face plant safe around my pets?

A: The ASPCA says so! Peperomia obtusifolia is non-toxic to cats, dogs, and horses.

Q. Can I grow baby rubber plant in a hanging basket?

A. Yes, baby rubber plant can be grown in a hanging basket easily. Be sure to check it more frequently, as hanging plants often dry out more quickly.

You’ll adore both green and variegated versions of peperomia obtusifolia. And, as you can see, it’s a surprisingly easy to care for plant indoors. I love this lush little tropical houseplant, and you will too!