Common Hedging Diseases and How To Treat Them 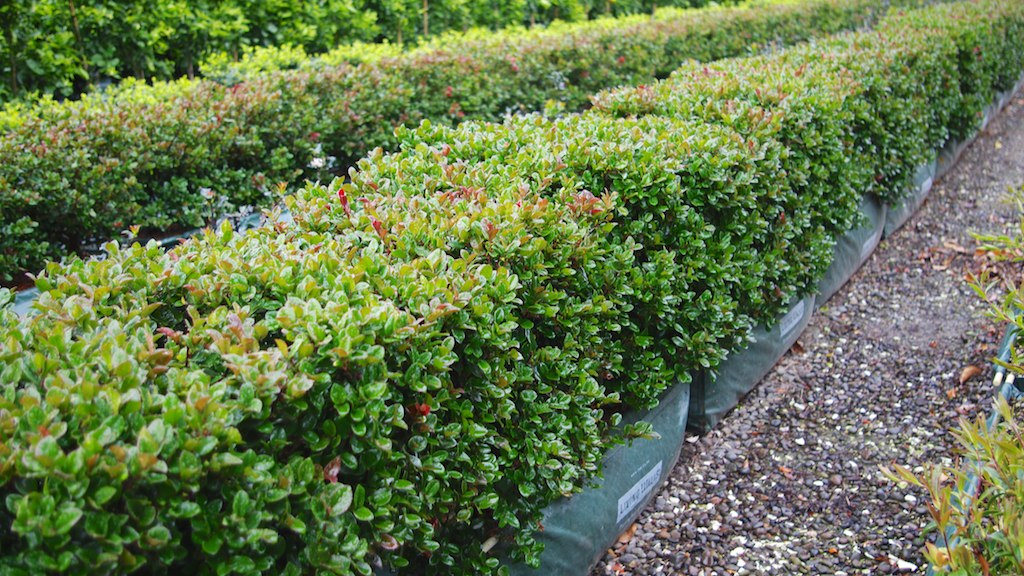 There are a number of common hedging diseases that can affect hedging of different types. This can lead primarily to discolouration, ruining the visual impact you’ve worked so hard to achieve with your hedging. In some – admittedly rare – cases, it can lead to plants dying. That’s why we’ve put this article together; so that you can diagnose some of the most common problems and treat them. Luckily, most diseases are quite easy to deal with, particularly with a little bit of love and care.

Powdery mildew is a powdery, grey fungal coating that affects a variety of hedging plants, such as native hawthorn hedges. Unfortunately, it is quite common and almost no hedge is fully immune.

However, the condition is actually relatively easy to treat. You could spray the hedge with a fungicide, or you could simply do nothing. It will go away if the underlying causes have been removed.

Mildew often arises due to plants having been dry. This is because they get weakened and become easy targets. The best way to treat powdery mildew in hot weather is by watering. Alongside this, a longer term solution is to include more well-rotted organic matter in your soil. This enables the ground to hold more water, reducing the stress the hedging may suffer in dry periods. A quick-and-easy solution for native hedging is to simply distribute your grass clippings along the bottom of your hedge.

The other reason for mildew is poor air circulation around the plant. This is particularly the case for sheltered climbing plants and thick hedging. The best way to deal with mildew in this case is to spray with a fungicide or liberally prune the most overgrown parts of the plant.

One form, cylindrocladium buxicola, can be identified by the spots it causes on leaves, as well as wispy grey fungus growing on the underside of leaves and black staining on woody parts. Over time, these spots can become larger areas of dead tissue, leading to defoliation.

The other form of blight fungus, volutella buxi, is typically diagnosed due to pink pustules developing underneath the leaves. Most often, this happens in humid weather. Leaves can turn yellow, fall off and sometimes the fungus leads to the development of cankers on the plant’s branches.

Due to the way these fungi lie dormant, one form of treatment is by raking up dead leaves and burning them, while also disposing of other affected material (such as branches).

While there aren’t any garden chemicals that deal specifically with either blight, copper fungicides are known to have some effect. Perhaps the best form of treatment, however, is prevention; planting well, in good organic soil with a top dressing of fish and bone, and utilising a fungicide spray in early April can go a long way towards preventing box blight. This is particularly the case if you also avoid clipping your hedge in warm, damp weather, as the fungi are most active in humid conditions.

Some types of hedging can end up turning bronze. This is the case for yew hedging. Individual plants can go bronze, signifying that the plant is stressed in some way. There are a range of underlying reasons for this.

Firstly, bronze foliage on yew hedges can be due to windburn, as well as other weather extremes, like hot summers and heavy frosts. This is due to sudden weather changes, so the best solution in this case is to leave them alone – they will soon regain their colour.

Secondly, it can be due to starvation. This happens with pot-grown yew plants that are then planted out. This can often be because the ground into which they were planted was badly prepared. For example, the planting holes for the plants may have been too small. The best way to diagnose this is to gently dig up the plant; if the rootball is still pot-shaped, you’ll soon know why the yew is suffering from bronze foliage. Luckily, the solution is then pretty straightforward; enlarge the hole, mix in compost and replant.

Thirdly, bronze foliage can arise from root rot. When the plants are establishing, they are particularly susceptible to phytophthora infection if the soil remains wet. This means extra care has to be taken when planting yew hedging in soils with poor drainage. If the bronze foliage is due to root rot, you can usually diagnose this by looking at where the bronzing is. It tends to start where the leaf is attached to the stem. Ultimately, the only solution is to improve the drainage; if that’s not possible, you’ll either have to wait until the affliction passes or avoid planting in the same place if the hedge plants do die.

Finally, bronze foliage can occur from ‘unwanted’ organic matter with high levels of uric acid from dogs, cats and their ‘you know what’. Stopping animals from using this area for their business will prevent the problem and the yew hedge should soon recover.

While hedging can suffer from a number of afflictions, most of them are easy to deal with. Bronzing often passes as yew plants are very tough, good preparation can prevent box blight, and powdery mildew can be treated with good watering and liberal pruning. What’s more, due to their hardiness, hedge plants will almost certainly recover quickly.

Author’s Bio: I’m Julian Bosdari and gardens, gardening and plants have been a lifelong passion. This passion has ended up with my owning and running Ashridge Nurseries for over 20 years, during which time we have sold millions of plants to well over 100,000 customers, with free, expert advice as part of the package. Why not come and share my obsession with hedging, trees, roses, soft fruit, flower bulbs and the like at www.ashridgetrees.co.uk.

Did you enjoy Julian Bosdari’s guest piece? Let us know in the comments below!