Home » How to Grow Boston Ferns: Care for Nephrolepis Exaltata

Did you know that the Boston fern can reduce pollutants in the air? Well, every plant can, but this one is one of the highest-rated species to do so. It’s also beautiful when grown in pots or in hanging baskets. It can really brighten up the house with its vibrant green or greenish-yellow foliage. And it’s easy to care for, too!

Does this make you want to grow your own? Well, whether you’ve got a hanging basket in your window or cultivating a bed along the shaded side of your home, I’ll tell you everything you need to know! 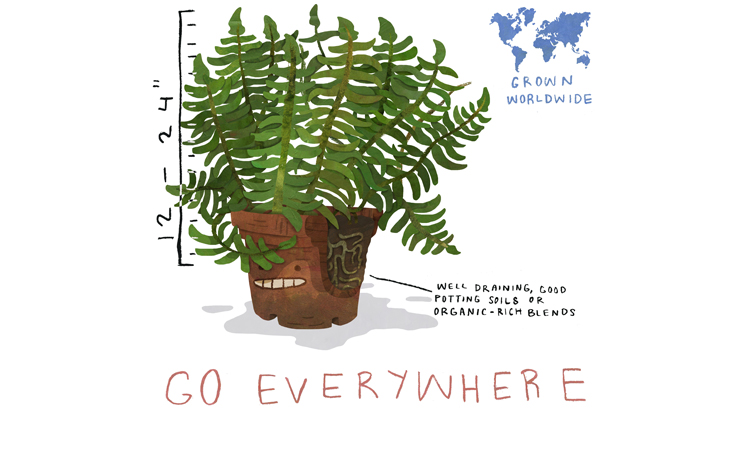 While there are more than 50 varieties out there, most of them are cultivars of two specific fern species. Here’s some info on those two species!

This is the variety that most people recognize, and which is grown worldwide. This fern commonly grows wild in humid environments such as swamps and forests, especially in tropical regions.

It’s found throughout central and south America, in Mexico and Florida, and in areas such as Polynesia or the West Indies. But of course, it’s also found in many homes and gardens as it’s a very popular houseplant.

There are cultivars of the Boston swordfern that are quite popular, such as “Tiger Fern” (shown above), which is prized for the unusual striping of its leaves. Even the non-striped varieties are strikingly beautiful!

Native to Asia, northern Australia, and the Hawaiian islands, the erect sword fern is also a popular garden choice. It has become so widespread in areas such as Florida that it’s now considered an invasive species there.

While most sword fern are very similar in shape to Nephrolepsis exaltata, their stems are more rigid. Thus, they stand more upright rather than drooping over. Some cultivars, like “Lemon Buttons” (shown above) have become more popular since they’ve got uniquely-shaped leaves, but many like just the traditional sword fern as well.

Whether indoors or outside, learning to care for and maintain your fern is simple as long as you follow our tips!

Light requirements vary depending on the season. In the fall and winter, they benefit from bright indirect light. In English, that means about 5′ away from a south-facing window. They love lots of indirect light.

It’s the more powerful light levels spring and summer which becomes difficult. They can’t tolerate direct sunlight for long and need to be placed in a location with filtered sunlight. Generally, northern-facing windows which get indirect light are good, as are shaded places under trees. If your home provides sun shelter, that’s also great.

Don’t think that they don’t need light at all. A minimum of two hours of indirect light a day is required!

How often do you water Boston ferns? Well, that depends on their environment. If you’re growing it as an indoor plant, you should start watering once the top inch or so of soil is dry. Water at soil level to keep the fronds dry.

If they seem to want more humidity, you can place a tray with stones and water in it beneath the pot. This will keep your ferns lush and happy. If your fern is in a hanging pot, give it a light misting with a mister bottle occasionally.

If grown outdoors,  you ideally want to water when the top inch of soil is dry. However, in warmer months this is more difficult to do, and they want high humidity levels. I recommend mulching around the base of your plants to help keep the soil a bit moist and provide a warm and humid environment. You don’t want it soggy, but you also don’t want it bone-dry!

One interesting fact about Boston ferns is that very cold water can shock their roots. Try to leave your water in a bucket or watering can for a little while so it can warm up if it’s cold.

As ferns often live in tropical environments, they do appreciate a rich soil blend. However, they don’t necessarily need one. A mixture of peat moss, sand, and good potting soil can provide the good drainage that these plants need while still holding enough water to keep the soil moist. If you have compost at hand, blend a little of that into your soil mix as well. Ferns do appreciate a soil that’s rich with plant matter.

Use liquid formula. You can opt for an organic such as liquid kelp, or you can choose a commercial houseplant fertilizer that’s diluted to half its normal strength. Fertilizer should be applied at the base of the plant so as to not scorch the fern’s fronds.

Runners will extend out from the plant and will gradually develop roots. These runners are called stolons. You can remove these at the base of the old plant and repot them in sterile potting soil. It will develop a new plant from the stolon.

Alternately, you can divide Boston ferns. To do this, wait until the soil becomes dry more than you normally would. This will allow the root system to dry out a bit too. Remove the plant from its pot or carefully dig it up from the soil. Then, use a serrated knife to cut the fern’s root ball in half. You can cut it in quarters or eighths from there if you wish more plants to form. Repot the new ferns, keeping them moist but not wet.

If you are starting a runner in a new pot, or replanting a cutting from an older plant, be sure to use sterile, well-draining potting mix. This will help your new plant to take off without any crowding from weed seeds that might be in older soil.

Generally, you don’t have to repot a Boston fern unless you want it to grow larger. The roots fill the pot over time,l and eventually will get too crowded. At that point, it’s good to divide it every few years to allow it to develop new roots.

They don’t require much in the way of pruning. Older leaves can be snipped off at the base of the plant to allow for new leaf growth. This also helps to remove leaves which may be browning or otherwise the worse for wear. Generally, pruning Boston ferns is a matter of aesthetics than one of plant maintenance.

While sword ferns are surprisingly simple to care for, there is a short list of things which can affect them negatively. Here’s a short list of what might occur, and how to fix it if it does.

The most common problem is when they appear to be turning greyish in color. If the leaves appear to be greying, and the plant’s growth appears to have stalled, it is likely the result of drought conditions. Be sure to regularly water your ferns once the top layer of soil has dried out.

If the fronds of your plant seem to be weak and droopy, it may require more light. Move it to a location where it gets a minimum of two hours of indirect bright light per day.

While leaves are generally a deep green hue, a lighter coloration can be caused by too much light. If you’re trying to cultivate a dark green fern, be careful to monitor how long it’s getting light for each day.

If the tips of the fronds or runners appear to turn brown and die, there is a nutrient issue. Either there are too many mineral salts (which can often be caused by runoff from ice melts), or the quality of the water the plant’s receiving is poor. You may be able to work new soil in around your plants to help improve the soil quality. Using collected rainwater to water your ferns may also be a good decision.

There is a form of nematode which can cause symptoms very similar to Pythium root rot (see below). You have two options to treat this: add beneficial nematodes which will attack the harmful ones, or treat it as if it were the root rot with a fungicide.

Some forms of caterpillar are known to feed on Boston fern, such as cutworms. Use Bacillus thuringiensis var. kurstaki, also called BT, to defend against caterpillar damage. I recommend Monterey BT as a foliar spray.

Fungus gnats can also become a problem. You can use neem oil to help combat the spread of these little gnats. Beneficial nematodes can also kill the gnat larvae in the soil.

Mealybugs, thrips, and scale insects can become destructive as well. All can be treated with neem oil, or alternately with an insecticidal soap like Safer Soap.

If the leaves of your fern are going greyish in color and you know it’s not water-related, your plant may be suffering from Pythium root rot. This fungal disease can stunt the growth of your fern and eventually kill it.

To avoid this type of root rot altogether, buy plants that are free of pathogens. Plant them in sterile potting soil. If your plant appears to have developed this root rot, you can use a fungicide to treat the soil and plant.

Another disease you might struggle with is Rhizoctonia aerial blight. This blight causes dark lesions or spotting on the leaves of your plant. This blight is also treatable by fungicides.

You can prune off any plant matter which has fallen victim to fungal diseases close to the base of the plant. This will visually improve the look of the plant. However, it will not treat the fungal infection, so that still needs to be done.

For both the root rot and the blight, I recommend a product like Bon-Neem, which combines a few different fungicidal and insecticidal agents together.

Q: Is it safe to grow around my cats?

A: If you have cats who chew on everything that is green, sword fern or any other true fern is generally safe to grow around your pets. A little occasional chewing is not going to hurt them, as Boston ferns are nontoxic. Just remember that too much of a good thing is still too much. Even cat grass gets thrown up if your cat overindulges!

It’s also dog-safe, so if Fido chews on everything, he’ll be fine. But your fern might not be safe from your pets, so keep your eyes peeled for signs of chewing damage.

Q: We get snow in the winter. Will that hurt my ferns?

A: Most fern plants can handle some cold, but when it dips into the frost range, they start to have issues. If you can, overwinter your fern indoors, or keep it inside a greenhouse for protection from the cold. If they’re planted outside in a garden bed, you can mulch heavily around the base to help protect the root mass from cold. They can also benefit when covered with a cold frame. Ideally, they should be in an environment that doesn’t fall below 55 degrees Fahrenheit, but they can survive short periods in a dormant state at temperatures down into the 40’s.

A: Remember, they love humidity. Mist them occasionally, and keep them away from heaters or radiators, as those can dry out the air. You can also place a saucer with some gravel and water in it beneath the plant to provide higher humidity levels.