Root Rot: How To Identify, Treat & Prevent It 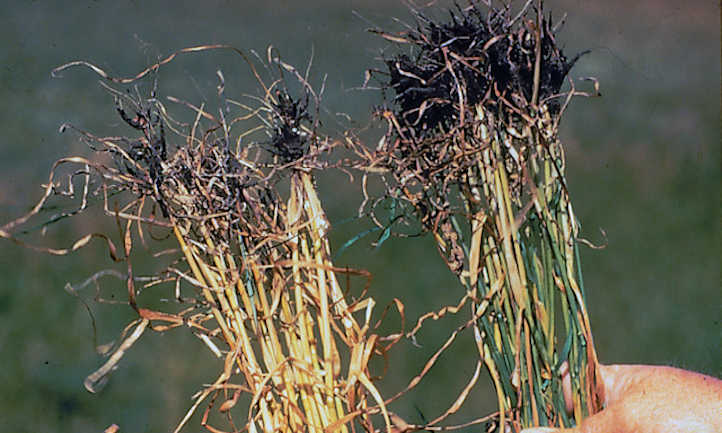 We talk about root rot around here pretty often. It’s a common, but really annoying plant disease, and it can be deadly in some circumstances. To the new gardener, it can seem like it happens when you overwater… but that’s only partially true.

It’s also a little tricky to diagnose root rot for someone inexperienced, solely because you can’t see the root system. It’s hidden in the soil, after all, and we’re certainly not advocating digging your plants up on a regular basis to check and see if the roots are intact.

So what exactly is root rot? How can you tell if it’s root rot or something else? Is there a way to treat root rot? These are questions we know you’re desperate to know answers for. So let’s dive in and figure out how to prevent root rot and rescue your plants from an unthinkably grim fate!

What Is Root Rot?

Let’s start with the basics: what is root rot, anyway?

There are a variety of soil-dwelling fungi, molds, or oomycetes out there, but root rot is caused by a small handful of these. Let’s go over the most common culprits, how they develop, and what they do.

Not a true fungi, this disease spreads more like an oomycete. While it can develop slender, threadlike hyphae extending outward from its host plant, it also has oospores that can overwinter in soil debris or infected plant material.

There are a wide number of species of pythium that impact plants. In the nursery industry, P. aphanidermatum strikes at temperatures below 68°F, where P. ultimum and P. irregulare are more common at temperatures above 77°F. These are the most common varieties in the United States on most houseplants, shrubs, or garden plants, but there are other species that are more likely to impact turfgrass.

In all cases, there are two things that make it more likely that your soil will get infected. Overly wet soil provides the perfect habitat for this species. Further, soils or soilless mixes that have high salt content are more likely to be contaminated, as it likes a slightly salty environment. This means that sphagnum peat moss and vermiculite blends are at risk, as are some forms of coconut coir.

Once this contaminant is in your soil, it can be hard to remove using organic measures. Further, overwatering and overfertilizing can increase infection rates in your plants. Overwatering furthers the cycle, plus can enable pests to nibble on roots and leave them open to infection. Overfertilizing with too much nitrogen suppresses the plant’s built-in defense response.

This disease is caused by a type of water mold. Anywhere that water accumulates or flows, this disease can occur. It’s common throughout the Pacific Northwest of the US, as an example, and along rivers or streambeds, in rice fields or any other flooded environment.

In a garden setting, phytophthora is most likely to strike at shrubs or trees, but can also impact vegetables like tomatoes, eggplant or peppers. It likes warm, wet conditions, and will thrive in those conditions, so drainage is key to reducing this annoying cause of rot.

Fusarium oxysporium, a fungi that we’ve covered in-depth for other reasons, is also a cause of rots. Typically it caused rots of roots and the plant crown, and it can live in the bed for long periods of time. This one is one of the most common forms in home gardens and can be tricky to deal with.

There are other species of fungus that can cause similar rotting damage to the above, but that have a more limited target spread.

Rhizoctonia is the largest of these. Caused by Rhizoctonia solani, it tends to strike out at a number of food plants like soybeans or wheat. It’s fairly common, but it can be controlled.

Thielaviopsis basicola is a common rotting disease of ornamentals or flowering plants. Like Rhizoctonia, this can be somewhat controlled.

Finally, Heterobasidion annosum causes annosus rots in pines, firs, or other coniferous species. It is a major pathogen in American forestry, but is not as common in residential spaces.

Symptoms and Identification of Root Rot

One of the interesting things about these assorted root rot causes is that they all typically experience similar above-ground damage. It’s easy to pin down that it is a type of rot on your plant, but much more difficult to determine which one!

In most cases, plants will begin to experience slower or stunted growth. Yellowing of leaves can occur; in turf grasses, you may see yellowed circular patches on the lawn. As the rotting continues, the plant can start to show other serious signs of an inability to take in nutrients and moisture. Wilting can occur, and trees or larger plants dropping leaves out of season is fairly common.

Beneath the soil’s surface, the roots all will have different portions that are decaying. For instance, pythium tends to start at the tips of the roots and then gradually spreads. Phytophthora, as a water mold, will enter at damaged portions of roots. The fungi tend to gradually force their way into the roots using their hyphae.

Like many other diseases, people often rule out more common gardening problems first and then move on to more serious disease issues from there. But since all of these forms of rot result in some way from excessive soil moisture, practicing good stewardship of your garden can prevent them from occurring. Ensure your soil has good drainage, that your garden doesn’t get pooled water or isn’t overwatered, and that your potted plants aren’t sitting in trays of water for long periods of time.

Treatment of these rots really depends on the variety of rot you’re dealing with.

For some of these rot types, there are potent fungicides that can be used to prevent further spread. These are usually applied directly to the soil and kill off fungus in the garden bed. Most are chemical methods, as there are very few organic fungicides that prevent issues in the potting media itself.

But even these chemical methods don’t work on all forms. For instance, our top three are all much more complex, and can often become a death sentence for your plants. Few anti-rot methods work on these, although a few very strong chemical methods may have limited effect.

What does seem to help in most cases is the application of beneficial mycorrhizae to your soil when planting. These mycorrhizae develop a symbiotic relationship with your plant, sharing space safely with it and helping protect it from outside damage while sharing the same food and water. Particularly good options include Bacillus subtilis, Trichoderma harzianum, or Gliocladium virens, all of which seem to repel the pathogens well. Adding these to your soil or applying them directly to the root system prior to planting can be very beneficial.

It’s also possible with smaller plants to trim off dead portions in an effort to protect the rest of the plant. For instance, if you find orchid roots rotting in their pot, you can carefully remove the plant, trim off the fungus and soft rot, and repot in fresh orchid media with excellent drainage.

What To Do If The Plant’s Already Dying

If your plant is already dying, there’s not a lot that you can do to prevent its decline. But you can still attempt to propagate from healthy cuttings and thus save the plant.

Select cuttings that are high up on the plant but still vigorous. Follow common methods for rooting your cuttings, and use sterile soil to do so. Don’t plant it in the same location as the prior plant was at, as it may also be at risk in that location until the fungus is gone.

If you’re not sure which type of rot’s set into the plant’s root system, consider taking the roots to your local garden extension and asking. It’s best to bag up the roots in a doubled zipper-sealed bag so that nothing on them can escape. The people at the extension office can generally provide insight into exactly what it is so you can try to prevent it in the future.

Dispose of your old plant without composting it, roots and all. You can consider solarizing the soil to kill off fungal pathogens, but remember that this will also kill off beneficial microorganisms in the ground too.

So, with all of these scary root destroyers out there, how do you protect your plants? In this case, prevention is far better than trying to find a cure. Good stewardship of your garden is key here.

There are a number of plant cultivars that have resistance to common pathogens like fusarium. Look for strains that have high resistance to strains of fungi that are common in your area. You should be able to find a wide variety of plants that are able to fight off most causes, although they may not be the exact ones you’re accustomed to growing.

Since all of these spread in some way because of wet or soggy conditions, it’s essential to avoid overwatering your plants. Try to use soaker hoses or other methods to regulate the water frequency and to prevent splashing that might spread plant diseases further.

In addition, work in perlite or large organic material like forest products to improve the drainage in your potting media. Well-draining mixes are commercially available and can become the perfect media for your future gardening endeavors.

If you’ve already experienced some root rot, don’t panic about removing contaminated potting mix from your beds. Instead, opt to plant either resistant species or plants not susceptible to your specific pathogen in those spaces for a while. Crop rotation may not be a perfect science, but it can allow your potting media to become naturally sterilized by the sun over time.