For the majority of my adult life, I have lived in dorm rooms, apartments, or small houses. While this is incredibly normal and something that I personally have enjoyed, it makes certain tasks such as composting more complex. Enter indoor compost bins, a useful device to help you recycle your kitchen waste into garden gold!

I’m sure a lot of you are in the same boat, so I’ve compiled a list to help you decide what type of indoor compost bin is best for your lifestyle. Living in a small space doesn’t mean that you can’t be eco-friendly or compost your used food items and materials, and I plan on proving just that to you!

As well as giving you specific examples of products you could purchase for composting in your home or apartment, I’m going to talk about how to pick the best indoor compost bin and some important tips to keep in mind. 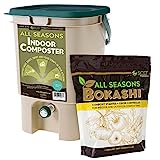 The SCD Probiotics K100 is a bokashi composter that is perfect for an average apartment or home. It functions much like standard indoor compost bins but uses inoculated bokashi bran to “pre-ferment” your food scraps. Once they’ve fermented and aged, just bury the bokashi compost directly in your garden or raised bed – it’ll vanish in a matter of days!

Worms in your home? It may seem strange, but a worm composter is a wonderful option for an indoor composter. Vermicomposting is gaining speed throughout the United States as a reliable way to turn your fruit and vegetable scraps or coffee grounds into garden gold. As they eat your food waste, worms produce worm castings, an amazing garden amendment. They’ll also recycle shredded paper or cardboard into garden gold, too — all in a small space.

The Urban Worm Bag is my preferred worm composter, and here’s a few reasons why:

The Worm Factory 360 is one of the best worm composters currently available for purchase. Unlike the Urban Worm Bag, it’s made up of multiple trays that the worms move between to process your kitchen waste. Here are some important things I noticed about it when I tested it out: 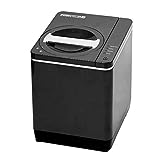 Technically speaking, this is more of a fertilizer factory than a composter. The Food Cycler takes your fruit and vegetable scraps, coffee or tea leaves, meat or dairy products and heats them to sterilize them. After they’re sterile, the heating continues until they’ve become completely dehydrated. The machine then grinds them up into small bits that you can bury in your soil as a fertilizer source. Here are the pros and cons I found about it:

If you want a no-frills kitchen compost bin, then this is the one for you. It’s cheap and gets the job done, but that’s about it. It doesn’t break down food scraps like the indoor worm bin or bokashi systems, nor does it dry it out like the Food Cycler, so it’s not ideal for indoor composting. You’ll still need another composting method outdoors. But as a kitchen compost bin to hold food in until you take it to an outdoor compost tumbler or to the worm bin, this model is fantastic and well worth your money.

When deciding which indoor compost bins will work for you, there are several things that you should consider.

A compost bin is an investment, and you want to make sure that you are picking one that will work in your home and be useful for you. Let’s start this selection process by going more in-depth into the different things you should be considering.

What Size Compost Bin Do You Need?

The first thing that you should make sure to carefully think about is how large you would like your compost bin to be. While some compost bins are compact enough that they can fit underneath kitchen sinks, others require larger amounts of space, and should instead be placed in pantries or closets.

Additionally, do you plan on being able to pick up and carry your compost bin to a larger composting area such as an outdoor compost bin or tumbler, or would you like it to be completely self-sustaining and semi-permanent?

Many of these questions will be answered by your living constraints, but it is important that you have these answers before you start officially looking for one to purchase.

Composters that use worms typically take a lot more space in your home than a bokashi pail would, but you’ll also be able to produce a lot more compost with them that’s ready to use in your homemade potting mix. An electric composter like the Food Cycler takes very little room but doesn’t produce traditional compost.

What Kind of Compost Do You Need?

A basic hot compost pile requires a lot of work and takes up space in the back yard. As “brown” and “green” materials break down, they cause a heat reaction that breaks down the material. You’ll need to go out and turn these piles to ensure even composting. A compost tumbler can make it easier to turn, but won’t be able to process as much material and may not heat up enough. The resulting product from a hot composting method is what you typically spread around plants as a mulch or use to lighten up heavy soils.

By comparison, indoor composter methods are all cold-reaction processes. Bokashi essentially ferments the waste products, breaking down their structure so that once they’re added to the soil they disappear in a matter of days. Worm composting uses worms to consume waste. The worms then excrete castings, a fine-particle material that is used as part of potting blends.

If you’re looking for larger-particle composts that can be used to mulch around plants, indoor composting methods may not produce what you’re looking for. But that doesn’t mean that the composts they produce aren’t useful! In fact, worm castings are specifically sought out by most home gardeners, and bokashi can be extremely effective at fertilizing your planting areas or improving clay soils.

If using a Food Cycler, you’ll find that your product isn’t actually composted. Instead, it’s dehydrated and chipped up. But this material can be buried in soil and will decompose over time. It’s a fantastic source of homemade fertilizer, though!

How Much Work Will You Need To Do?

With traditional composting methods like hot compost piles, there’s a lot of physical labor that goes into it. You’ll be turning your pile at least once a week to aerate it and maintain its heat.

But with most indoor methods, most of your process is in gathering your kitchen waste and preparing it. The finer you can chop fruit or vegetable waste, the faster that worms will eat it. Similarly, finer materials will take less time to ferment in a bokashi bin.

You don’t absolutely need to do the extra work, though. I’ve watched worms eat whole pumpkins gradually over time. In fact, here’s a great time-lapse of a worm farm doing exactly that!

Bokashi composting requires you to drain off any liquid every couple days, and then when your bin’s full you set it aside for a couple weeks to finish fermenting. You’ll then need to dig a hole to bury your material in. But it will decompose in virtually any soil. I know people who have a large plastic bin full of garden soil that they put their bokashi into to finish the decomposition process. It improves the soil quality and the waste basically disappears.

In a worm composter, you’ll eventually need to harvest your finished castings for use, but you can do that right when you need them and store them in the composter until then.

Extra Features to Look For

Finally, when picking your ideal indoor compost bin, it’s essential that you decide what features you would like it to have. Some bins rely on worms to break down the food, while others rely on the process of fermentation. Worms have been heralded as one of the best ways to quickly break down food without it smelling, but some people do not like the idea of having these critters in their homes.

On the flip side, many gardeners do not like the process of fermentation, as they believe it takes too long and runs the possibility of being smelly.

Some compost bins have the ability to break down meat, fish, and dairy. While you can put those things into other compost methods, they’ll still smell as they break down. I personally tend to have a lot of meats and dairy in my diet, so I don’t mind spending a bit more for this feature. I have friends that are vegetarians or vegans, though, so this option would be rather pointless for them.

Some bins even have multiple drawers and layers, while a majority of them consist of one large bin. Depending on how you would like to go about composting your food and if you would like to separate it or not, it is worth considering purchasing the tray option.

Another major thing that you must keep in mind while shopping for composters is that there is a difference between a compost collector and a composter.

A compost collector, sometimes called a countertop compost bin, is simply a bucket that individuals place food scraps in and then empty into an outdoor composter where the food is broken down. They can be used to collect material for your worm bin, too. Most of the time these live next to the kitchen sink or on a counter, and they don’t actually break down their contents.

A composting bin does the entire process, either through fermentation or the use of worms.

Pay careful attention to which one you are buying, because you don’t want to be disappointed or caught off guard!

The two main issues that can occur when composting inside are potential leakage or unpleasant smells.

I can’t say enough amazing things about indoor composting, but I’d be lying if I said these weren’t potential drawbacks. Fortunately, they’re both pretty simple to fix.

I recommend making sure that you have your indoor composting bin in an area that is out of the way, just in case leakages or unpleasant scents do wind up occurring. Leachate from the composting process is easy to prevent or control by adding extra bedding or by draining it off regularly, but to reduce aromas you’ll want to bury your material deep in the worm bin or use extra bokashi bran.

And there you have it- the best indoor composters for apartments and small homes! Out of the many options that are currently on the market, I personally believe that the bokashi and worm composters are the best choices all around.