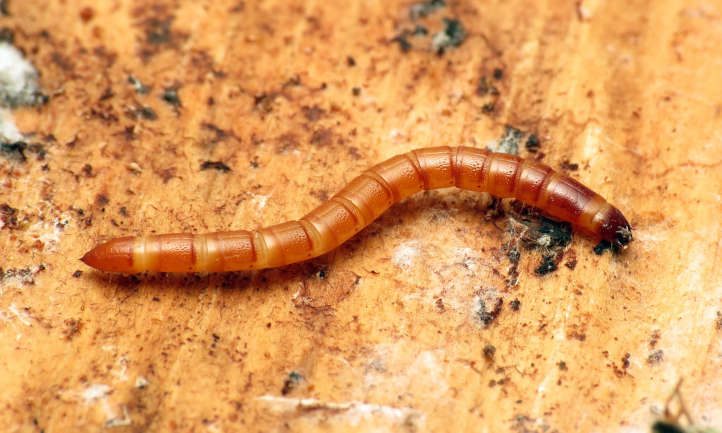 The long-lived, hungry wireworm can wreak havoc on the agricultural sector. With a diverse choice of common crops as their target, these larvae of click beetles seek out and chew through the roots of plants.

These pests are notoriously hard to kill off. Many chemical alternatives don’t seem to have much effect.

Don’t let this scare you, though! Today we learn what a wireworm is. We’ll also go over the adult form, click beetles. And while it may take some work to get rid of these soil pests, I’ll give you a list of options that will help you practice wireworm control.

The adult stage of this pest is called a click beetle. This name refers to the clicking sound the adults make when snapping their thorax. They are the only stage of the wireworm life cycle which can be regularly seen above ground. Keep a watchful eye out for these!

Click beetles lay eggs directly in the soil. These eggs are tiny and white, round in shape, and usually are placed near grass or crop roots. When they hatch, the wireworm larvae emerge, which are what we call wireworms . Larvae coloration is usually yellow to black.

Roughly 1/16th of an inch in size, the newly hatched wireworm larvae will grow to reach sizes of 3/4″ in length before pupation. This process can take 2-3 years, as wireworms are slow to develop. While they are not particularly damaging to plants in their first year, the older larvae can devour roots, causing damaged plants, wilting, and plant death.

The pupae that are developed at the end of the 2-3 year larval stage are white and extremely soft. These are easily damaged by anything that might dig into the soil. When the pupal stage ends, the adult beetle will dig back to the surface and begin the life cycle again. The adult beetles emerge when the soil temperature and soil moisture are favorable.

As wireworms spend their entire larval stage underground, they can be found in, around, or in close proximity to plant roots. Adult beetles shelter in leaf litter or other plant debris. They prefer to be near their food source.

There are many different species, some of which are named for the environment in which they typically live. All prefer soil temperatures between 50°F to 60°F.

For instance, the Pacific Coast wireworm (Limonius canus) is quite common throughout the west coast region of the US. The dryland wireworm (Ctenicera pruinina) is common in the northwest and western crop growing regions of the US, especially in the plains.

There are varieties of this annoying pest found throughout the world. As this agricultural pest feasts on the roots of predominantly grass or tuber vegetable crops, they can be found anywhere where these crops are grown. They are also present in weedy fields where wild grasses provide food sources.

What Do They Eat?

While there are types which feast on particular crops, such as the sugarbeet wireworm (Limonius californicus), the vast majority of wireworm damage is on the roots of cereal plants and root crops such as carrot, potato, or beet. There’s even a variety referred to as the potato worm because it bores out large holes in tuberous roots.

However, they can be found consuming the roots of brassicas, melons, sweet potato, beans, lettuce, corn, onions, peas, and strawberries as well. Some wild grasses that produce germinating seeds, such as ryegrass, can also be a source of food for these pests.

But what do these beetles eat? The adult beetles tend to eat nectar and pollen from flowers. Sometimes they will snack on the flower petals themselves. A few varieties will eat softer-bodied tiny insects like aphids as well.

How To Get Rid Of Wireworms

As I mentioned earlier, it can be notoriously hard to wipe out these guys and prevent wireworm damage. This has a lot to do with their soil-dwelling tendencies. It’s hard to find crop worms that you can’t see!

There are some things that you can do to reduce wireworm populations and slowly get them out of your soil. Let’s go over those wireworm control methods now!

This beetle, like most other beetles, is susceptible to pyrethrin-based sprays. If you see click beetles in your garden and the surrounding soil, use a spray such as PyGanic. This should take care of the beetles on the surface.

If wire worms have become a problem in your lawn or flower beds, you can use EcoSMART Organic Insect Killer Granules. Kid and pet friendly, these granules will help reduce the wireworm populations and those of multiple kinds of insects. These aren’t intended for edible garden use, although they won’t hurt your plants. For lawns or flowers, they’re very effective.

While some people create a pyrethrin drench for the soil to kill young larvae, you should be careful doing so. Soil insecticides can be incredibly effective to reduce larvae populations. However, they can also harm other soil-dwellers who are beneficial to the garden. This should only be done as a last resort during a particularly large infestation.

I love to incorporate beneficial insects into my garden as a form of wireworm control, because they often can take care of most pests for me. One of the best possible defenses is to introduce beneficial nematodes into your soil. These extremely tiny organisms will attack and consume the larvae and pupal stages of the pest. They also help with a multitude of other pests!

Place traps in the soil to lure larvae. I particularly like the modified bait trap method shown in the video below. You can also use a large potato that’s been drilled out with a stick through it as a bait potato. Follow the directions in this video to see how it works! If you find lots of worms, then it’s time to move on to more serious control options.

Cultivate your soil! By tilling your soil, you are bringing all of the larvae to the surface, both active and pupating. This makes them prime candidates for bird food. It also makes the soil less hospitable to crop worm infestation. I recommend using a product such as a hand-tiller. A long-handled tiller helps you get deep under the soil’s surface. There are plenty of options for hand tillers out there!

Rotate your crops. It’s important to move your plants around. Keeping them in the same location year after year creates a perfect environment for that crop’s pests to move into. If you change the location of your plant types every year, you can dissuade some types of pest from sticking around.

Q: I have some potatoes that have wireworm holes. Are they still edible?

A: Actually, they might be safe to eat. Examine the potato thoroughly. If the only wireworm damage was the hole bored through the tuber, and there are no visible signs of rot, you can simply cut out any damaged segments and cook the rest of the potato.

If there are any signs of softening or rot damage around the hole, I would discard the potato. I do not advise trying to store potatoes with wireworm damage, the same way I would advise against storing potatoes with gouged sides or other external damage.

Q: Can I compost plants with roots that are damaged by wireworms?

A: Well, you can, but it may not be wise to compost the roots. If there are eggs still around the roots, you may be creating a nice warm environment where those eggs hatch and infest your compost. It’s better to dispose entirely of infested material when possible. The same holds true of any plant which shows signs of disease or pest infestation.