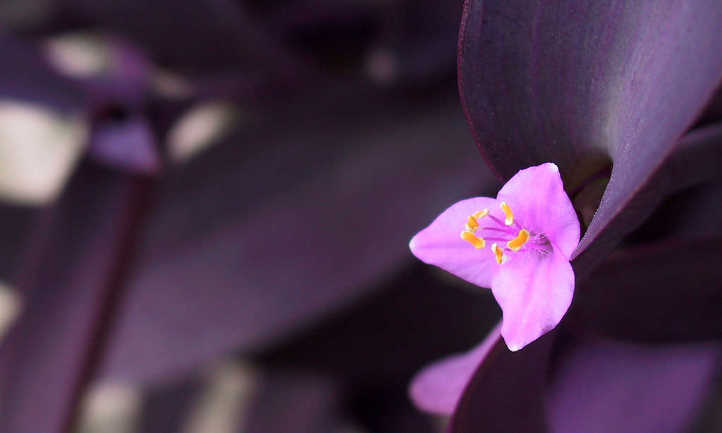 Looking for a plant that’ll attract attention? The vivid purple leaves and stems of tradescantia pallida will do it! This wandering jew species is called purple heart plant, purple queen, and more.

Popular in frost-free regions, a purple heart ground cover can be extremely striking. But it does just as well hanging, and it makes a fantastic house plant too.

All About The Purple Queen

Originating in eastern Mexico, this particular species of wandering jew is a stunner. Its leaves, which are long and pointed, can reach up to seven inches in length. Sometimes the tips will remain red or green while the rest of the leaf turns purple.

The stems have obvious segmentation along their length. This has contributed to its spread as an invasive species in warmer climates. At the joints, the plant is weaker and easy to snap off, but it reroots from the joint easily. This also makes it very easy to grow from cuttings!

In cooler climates, there’s little risk of it becoming widespread. Tradescantia pallida is not tolerant of frosty climates and will die back in the cold.

The flowers it produces are small. Often three-petaled, they range from white to pinks and lavenders in color. They aren’t particularly showy, but offer a counterpoint to the bright foliage.

The Many Names For Purple Heart

What’s in a name? In the case of this plant, an awful lot.

Originally named Setcreasea pallida, the botanical name Setcreasea purpurea has also been used. The former was its botanical name from 1911 onward. Both of these names fell out of usage in 1975 when it was reclassified as Tradescantia pallida.

As for its common names, it has many of those as well! Wandering jew, walking jew, purple heart, purple queen, and purple secretia are used. It’s also referred to as a combination of any of the above, such as wandering jew purple heart.

Phytoremediation is becoming a popular topic in our over-polluted world. And here, the purple heart wandering jew excels. Its ability to remove volatile organic compounds (or VOCs) from our indoor air is highly rated!

More and more often, people are turning to plants to improve their air quality. Tradescantia pallida was rated “superior” after an extended study at the University of Georgia. It only lost out to a handful of other plants.

English ivy and wax plants were slightly better at air cleaning than purple heart. So were asparagus fern and the purple waffle plant. But if you’re looking to clean your air, growing a mix of these will help!

Some tests have also shown that this wandering jew can help absorb heavy metals in soil. There’s still more testing that needs to happen, but it’s clear that this plant will make your life better in more ways than one.

These are some of the best plants for beginners to grow. Not only are they gorgeous, but they’re easy to care for. Let’s go over the basics of wandering jew care briefly, but also specifics for the purple queen itself.

Opt for bright light conditions. If you’re growing purple heart outdoors, you may want to put it in full sun! It will tolerate partial shade as long as it gets enough ambient light.

Temperature matters for this plant. While the roots are hardy to 10 degrees, the plant’s foliage will die back in frost conditions. Consider bringing it indoors if you’re in a colder climate.

Keep the soil evenly moist. If it’s dry in the upper inch of soil, it’s time to water. The soil itself should be rich in organic matter and able to hold some water while allowing excess to drain.

Fertilize your plant at least monthly during its active growing season. A balanced organic fertilizer is a good choice.

To keep your plant from getting too leggy, pinch off stem tips. Make sure to pinch above a leaf joint, as the plant will start new growth there. You should also cut them back after they’ve finished flowering.

While spider mites are a common pest indoors, outdoor plants are prone to scale insects. Mealybugs are a very common issue. You can use neem oil to combat all these pests.

Finally, remember that pets and wandering jew don’t mix. While the most common problem is irritated skin, the sap is mildly poisonous as well. Keep it out of the reach of your four-legged family members if you can!

While it looks phenomenal in a hanging pot, purple queen is actually quite fragile. Too much banging around and the stems will snap off. It’s important to make sure it’s not where it’s likely to get jostled around, whether it’s hanging or on the ground.

Indoors, this is an evergreen plant as the climate is ideal. But if your plant is actually green instead of purple, it’s a sign of low light. To develop that amazing coloration, it needs full sun.

While tradescantia pallida tends to be relatively drought-hardy, it also tolerates heavy watering. It’s adaptable enough to take both! Either way, ensure that the soil will hold moisture, but drain off excess water well.

Cuttings from this plant root very easily. You don’t need rooting hormone or specialized care. A fresh cutting placed into moist potting soil is enough for it to develop roots. It’s a great candidate for air layering, too!

I can’t emphasize just how easy this plant is to grow! Everyone should have a purple heart tradescantia, whether indoors or out. They’re a beautiful accent, and they look great in combination with other plants, too. Try growing yours with some sweet potato vines for a colorful planter!