Skip to content
Epic Gardening is reader-supported. When you buy through links on our site, we may earn an affiliate commission. Learn more
Fruits 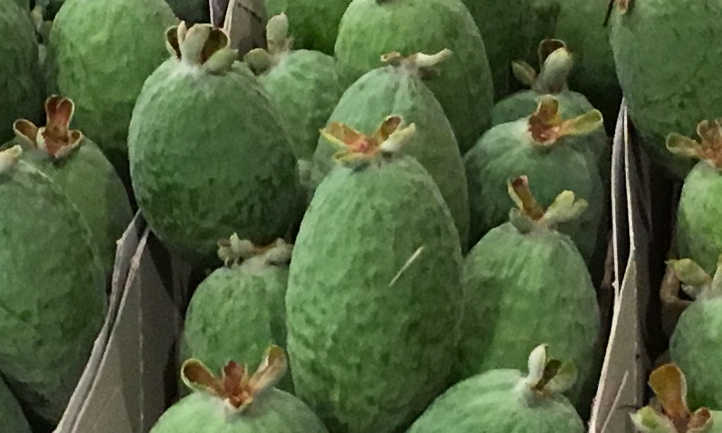 When I was a kid, I was fascinated with my grandfather’s pineapple guava tree. He called it a feijoa, and once it ripened I’d receive an overflowing bag of produce. In southern California where I lived then, it wasn’t common in stores!

Now that I’m older, I’m a huge fan of acca sellowiana, sometimes called feijoa sellowiana. It’s still uncommon in California as a crop fruit, as it can spoil before making it to market. But to a gardener, it’s a delightful plant that can be grown as either a tree or shrub!

Let’s discuss every aspect of this lovely tropical. From light needs to fruit production, we’ll cover everything you need for growing it at home. This is a favorite plant of mine, and it’ll be one of yours too!

Is pineapple guava feijoa sellowiana or acca sellowiana? Well, actually, it’s both. Its genus name was given in honor of Don da Silva Feijoa, a Spanish botanist. The species name honors Friedrich Sellow, a German who collected its first sample.

A native of Brazil, it can also be found in Paraguay, Colombia, Argentina and Uruguay. Part of family Myrtaceae, it’s called guavasteen, feijoa, and fig guava. Rarely it’s referred to as Brazilian guava or its oddest name, New Zealand banana.

This tree can reach heights of up to 20 feet tall. But due to its many-trunked habit, it’s also mass-planted to form a hedge or landscape windbreak. An attractive evergreen, it grows best in zones 8-10.

Its leaves are dark green with silver-grey undersides. This species may develop spur branches from the plant base. Trimming and training can create a more typical treelike growing pattern. Simply allowing it to grow on its own produces long, slender branches with a wide canopy at their tips.

Branches are brown with greyish bark that occasionally peels. Leaves form in opposite pairs, and are placed up high on the branch. It doesn’t flower in the lower portion of the plant.

In the spring, showy red flowers appear alone or in groups. Each of these flowers has four fleshy petals and a cluster of vividly purple upright stamens. These petals are edible, and removing them doesn’t impact fruit development.

Fruit is green and oval or pear-shaped. When cut, the interior is soft-fleshed, with a granular texture and gelatinous seed chamber. The flavor is sweet and tart, a cross between pineapple and guava or pineapple and strawberry. Even before it ripens, it smells fragrant.

A wide variety of cultivars are available. Coolidge, Pineapple Gem, and Mammoth are the most common in my part of California, but many other varieties exist worldwide.

You’ll love the ease of care for these plants. They’re a good first-time fruit for gardeners, and they’re lovely in a garden setting!

Full sun is best. While they can tolerate partial shade, they really prefer lots of sunlight. Those in zone 10 to 11 may want to consider placing them where they have afternoon shade.

Tropical plants like feijoa tree prefer warmer temperatures. Once established, an older plant can tolerate temperatures down to 15º Fahrenheit in the winter at the lowest. Areas where winters are cool (30-40º) and summers are between 80-90º are ideal.

Once established, your plants are drought-tolerant, but fruiting requires water. For best fruit set, water your plants consistently. In their native environment they get 30-40 inches of rain per year, so aim for a similar level of watering. One inch of water per week is a good benchmark. Provide additional moisture during hot weather, especially if it’s fruiting.

While it’ll grow in average soils, acca sellowiana prefers organic-rich soil. Add compost before planting. The location must drain excess moisture well. Shallow-rooted, these plants do not tolerate puddling around the base.

Avoid hard packed clay soils if possible, as the roots have a difficult time in them. A loose, friable garden soil is ideal, especially one enriched with compost.

Sandier soils typically don’t hold enough water for good production. With these, you will need to irrigate more often. Drip irrigation such as soaker hoses can simplify watering.

Fertilize every two months with a balanced 8-8-8 fertilizer from April through October. Spread it evenly under the tree or shrub’s canopy at least 5″ away from the trunk.

Avoid fertilizing in the late fall as this can spur new growth as the weather turns cold.

Cuttings and seed are the most common ways to propagate these plants.

Branch cuttings from new, young tips are ideal. Use a rooting hormone to promote root development. Ensure your cuttings are warm, and place them somewhere where they have access to full sun. Keep the soil moist and warm during rooting.

Seed germination takes roughly three weeks. They should be planted in sterile soil, as damping off is common. Use viable seed from a reliable company to get specific types. While home harvested seed may be viable, it may not produce a true duplicate of its parent plant.

Container gardening is an option with the pineapple guava! Many people have had excellent success with keeping their trees in large containers. Make sure the roots have room to stretch out, as they tend to be shallow-rooting. A wider, shallower pot like a half-barrel is better than a tall, deep container. Air Pots will serve as excellent containers. Try the 5-gallon or 10-gallon size, which is available in our shop.

If its growth slows significantly, it may be time to repot. In the spring, remove your plant from its current pot and examine the roots. If they are starting to circle in the shape of the pot, select a larger container. Remove older soil and provide new, rich soil when replanting. Plant at the same depth as before.

Prune in late fall or early winter as your plant enters its dormant winter state. The goal is to prune when it’s not actively producing new foliage.

If training it to a tree shape, prune away all branches or foliage from the base of the main trunk. You can also remove all low branches from the bottom 1/3rd of the trunk, as they won’t flower or fruit.

Thin out vertical growth to allow more light into the canopy. Use sterilized bypass pruning shears to make your cuts. Avoid branches which have flowers on them.

In spring and summer, watch for branches that rub together or cross over one another. The friction can cause damage to the fruit or bark. Remove weaker branches at these points, leaving the stronger ones in place.

Dead or damaged branches can be removed at any time.

Opting for a shrub format? Trim to shape at any time, although your major pruning times should be as mentioned above. You do not need to remove the lower growth from the trunk, as that will help fill in spaces between plants.

Flowering happens in the US between April and June. Typically, feijoas will ripen within a 6 month timeframe from when the flowers appear.

This plant’s self-harvesting. When the fruit matures, it will drop on its own. A thick mulch of soft straw is recommended under your plants to prevent bruising. Collect fallen guavas from beneath your plants daily.

In warm conditions, fruit will only last for 3-4 days before it begins to decay. Cold storage at 32 degrees can extend its longevity. Once removed from cold storage, use quickly to prevent spoilage.

Very little will cause difficulties for your pineapple guava. Still, let’s go over the few problems that may arise.

Excessive heat during fruiting can cause premature dropping of produce. If you have a sudden, long-lasting spike of heat, consider putting some shade cloth up. Afternoon shade can reduce the likelihood of premature drop. Additional watering may also help.

In the United States, black scale is the most common pest. Other forms of scale are common abroad.

Fruit flies may become an issue during the summer. Pick up fallen produce when it drops.

In both cases, neem oil can help prevent pest infestation without harming fruits.

Garden diseases are not common on this species. In rare instances, cercospora leaf spot may appear.

A: Most varieties are pollinated by bees or other pollinating insects. Depending on which cultivar you’re growing, you may need more than one plant. Most types are at least somewhat self-fruitful but bear larger harvests with another plant nearby.

Q: How big do pineapple guava trees get?

A: Most mature trees are maintained at or around 10-15 feet tall, but can get as tall as 20 feet. Shrub-like growth, such as feijoa hedges, are typically 3-8 feet tall.