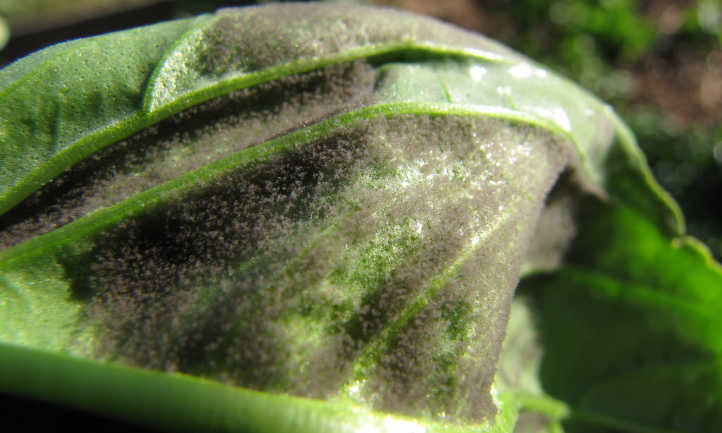 Among the plant diseases out there, downy mildew is one of the worst. Because it doesn’t cause a lot of damage on the outset, gardeners don’t see it as an issue. A rampant infection in cool temperatures of the spring growing season spells disaster for the rest of the year.

Thankfully, there are ways to prevent downy mildew and control the spread of pathogens that cause it. Culturally, gardeners eliminate moisture, improve air circulation, prune, and change their irrigation techniques by using drip irrigation. Downy mildew fungicide is another option.

Treatment is difficult because downy mildews remain for long periods, and resemble other diseases in plant pathology, like angular leaf spot and powdery mildew. But knowing is half the battle. So let’s talk about this disease, and how to limit its spread in your garden.

What Is Downy Mildew?

Anyone who lives in a humid climate, especially in the southern United States, is experienced with downy mildews. Each downy mildew pathogen has a preference for wet surroundings. They live in the ground, colonizing the leaves of plants, and causing severe damage. Downy mold is a member of the Peronosporaceae family. There are variations of Peronosporaceae that make up the water mold family, each with different preferences.

Peronospora and Plasmopara species are particularly dangerous for most gardeners. Bremia and Basidiophora are also problematic, especially on ornamental plants. Technically, Peronosporaceae are not a true fungus. Research has shown that downy mildews have similar traits to fungal development but are oomycete microbes. For gardening purposes, we treat it as if it were a fungal disease because of how it spreads.

Downy mildew grows on and into the leaves of preferred plants, living off the plant’s water supply. While small amounts of downy mildew don’t do major harm to your garden, they’re a symptom of a larger issue. Many food crops and some flowers and shrubs are susceptible to this infection. While it rarely causes damage to more than 25% of a given crop field in agricultural surroundings, in the home garden it can be quite destructive. Take it out before it spreads too widely!

Downy mildews often begin in the soil. Oomycete spores are windblown onto nearby areas and other plants. Moisture that splashes soil onto the leaves of plants moves spores there. They latch onto the underside of the leaf, and penetrate the leaf’s surface with their mycelia. Infected leaves develop more downy growth if the disease is untreated.

As downy mildew grows, it causes spotting on the upper side of leaves. Underneath the leaf, a mat of sporangia forms, ranging from white, grey, or purplish. These release more spores. Those that land on leaves are only viable for a short period, but colonize them if conditions are right.

Others are dispersed into the soil via rotting plant debris, waiting for another juicy plant. Spores overwinter in the earth and reappear the moment infected matter gets to plant leaves. The area may be infected for up to five years. The mildew’s mycelia, or fungus-like root system, spreads throughout your plant’s stems. New growth may already be infected by downy mildew if the plant had prior issues. Fully infected plants produce damaged fruit or have problems with new growth.

The cones of colonized hops are destroyed before they fully form. Cucumbers have a similar problem with young fruit, especially if they aren’t trellised. Cucumber leaves become cloudy, gray, and shrivel up.

Like other plant diseases, this devastating disease has adapted and changed over time. In 2007, basil downy mildew (Peronospora belbahrii) was identified in the U.S. By 2012, reports ranged throughout the US and Canada. It’s believed the form it took in 2012 was an evolved old strain. This strain was reported in Uganda in 1933 and evolved into a new and more aggressive variation. Because there are other causes for yellowing of the basil leaf surface, it often isn’t treated, which spells doom for the plant. The slightly purplish-grey spores on the underside of leaves are an indication of downy mildew that other similar diseases – like angular leaf spot or powdery mildews – do not have.

Downy mildew can be transmitted through infected seed. This is probably how it made its way around the world. Hot water sterilization of the seeds isn’t viable. Some seed companies sterilize the exterior of basil seeds via steam treatments with good effect. There are other seeds that can carry downy mildew, too. Peronospora lamii was discovered on coleus in 2005 in New York, and by late 2006 it had spread throughout the entire US. Downy mildew of impatiens, Plasmopara obduscens, has developed rapidly since 2011 on the eastern coast. While primarily centered around Massachusetts, it has spread to other states via infected plant sales.

Difficult as it is to deal with, this plant disease regularly evolves, impacting other plants. This helps us research to work toward a cure.

We’ve covered a few of the plants that are affected by this plant disease, but other crops may take on a downy appearance that is different from those. Let’s discuss the progression of the disease, and then what it looks like on a select few plants.

Downy mildew symptoms begin when a colony forms on the underside of the leaf of a plant. The leaf’s underside takes on a whitish, purplish, bluish, or bluish-gray speckling. Once the spore colony locks into the leaf structure, the upper leaf surface develops yellow spots to mirror the location of the sporangia underneath. At this time, the sporangia creates new spores. The downy mildew may further colonize the leaf it’s on and spread to form a fuzzy coating of sporangia.

As the yellow spots die out, the mildew turns grey and powdery, and spores release onto other leaves. Branches and leaves become distorted or die off entirely. Roughly 7 to 10 days pass from the time of infection to the time that new spores form, though sometimes it occurs in 4 days if conditions are right. High humidity at 85% or more at the garden’s surface speeds progression.

Left untreated or constantly reinfected, the plant may die. It’s more common that a plant will be colonized by the mycelia. Therefore, the plant is a danger to others in the garden as outbreaks reoccur. However, effective deterrent measures reduce that likelihood. Control measures may wipe out the infection altogether.

Downy mildew of grapes has a closely related pathogen (Plasmopara viticola), but its symptoms are different from downy mildew on cucurbits. While there is still a characteristically white leaf underside, the initial symptoms include oily patches on the grape leaf that eventually turn yellow and morph together, turning to brown spots near the end of the cycle.

Downy mildew on roses is caused by the pathogen Peronospora sparsa. It too presents initially as oily spots on a rose leaf. As the disease progresses, the leaves take on a warped appearance with purple spots. These spots then sporulate and, in the final stages of the disease, turn light brown or white.

Once downy mildew colonizes a plant, strike quickly to lessen its ability to do severe damage to the rest of your garden. Neem oil is your first line of defense. Applied early on, it stops downy mildew in its tracks. However, it won’t kill any of the disease already in the plant’s stems.

Organic control of downy mildew control is possible with copper fungicide. Apply this organic treatment every 7-10 days or until the plant has visibly recovered. For more severe issues, spray broad-spectrum systemic fungicides on plants, and drench the base of the plant. These work their way through the plant’s tissues, dealing with a variety of other foliar diseases too.

Note that in neither case are these fungicides guaranteed to eliminate downy mildew. Both have moderate to good effects on this disease, but there are still strains with developed resistance. Copper-based fungicides are widely used throughout the Pacific Northwest as both a preventative and a fungicide, and phosphorous acid treatments are popular as well.

Chemical control is difficult to obtain for home gardeners. Most are used in large-scale agriculture and are dangerous to apply without proper safety measures. Chlorothalonil fungicides are typically the only chemical variations that home gardeners have ready access to. If neither of the organic options work, this may be an option. The best way to control downy mildew is prevention.

The first place to look for preventing this disease is at your watering habits and the environmental conditions of your garden. Only water in the early morning hours. This ensures that your plants have time to dry during the day. Use selective pruning to improve air circulation, as air currents and good air circulation help foliage dry. Remove visibly-damaged leaves as they crop up to prevent further spread into the plant’s system.

Stake plants or secure them in a fashion where air can still get around to all surfaces. If you use a cage, thin out some branches to ensure you have full air circulation. This is especially important with plants like tomatoes that form dense growth. Use a soaker hose or drip irrigation instead of a standard spray nozzle to reduce the amount of splashing onto leaves, protecting your plant’s foliage from damaging spores. Reduce overhead irrigation as well because it dampens your ability to practice proper disease control.

In organic production in enclosed environments like a greenhouse, reduce the relative humidity by opening vents and adding fans to provide moving air currents. This helps prevent powdery mildew and concurrently improves your pest management process. There are many resistant varieties of plants available. When at all possible, choose resistant cultivars to avoid the problem entirely.

Keep your garden free of plant debris. Mulch if necessary, but avoid the buildup of fallen leaves, especially those which may harbor spores. Similarly, control weeds around your plants to reduce airflow issues at their base. Removing weeds as they appear is always a good idea, as it reduces their appearance in subsequent years.

Finally, remove and destroy severely diseased plants for the safety of the rest of your garden. Nobody wants to lose a plant, but the long-term effects of a lack of downy mildew control in the garden can be catastrophic to the rest.

If you practice good garden maintenance regularly, you won’t have severe problems from downy mildews. Once the weather warms up, it’s less likely to appear, which gives you the break you need to recover from the cooler months of the year!

Q: How do you treat downy mildew?
A: Half of this piece is devoted to that topic. Check it out!

Q: What is downy mildew caused by?
A: There are a number of oomycetes that cause downy mildew.

Q: What damage does downy mildew cause?
A: Leaf die-off, and reduced plant growth and yields are the result.

Q: What is symptom of downy mildew?
A: In all plants, the undersides of leaves become colonized with spores.

Q: Is downy mildew harmful?
A: It is! It ilmits plant growth and production.

Q: Which fungicide is best for downy mildew?
A: There are a few identified in the Control section of this piece. Organic options are less damaging to the surrounding ecology.

Q: What is a natural remedy for downy mildew?
A: Neem oil is a great remedy.

Q: Is downy mildew a fungal disease?
A: Not technically. It’s caused by mold pathogens.

Q: Does downy mildew survive winter?
A: It certainly can.