Skip to content
Epic Gardening is reader-supported. When you buy through links on our site, we may earn an affiliate commission. Learn more
Flowers, Shrubs 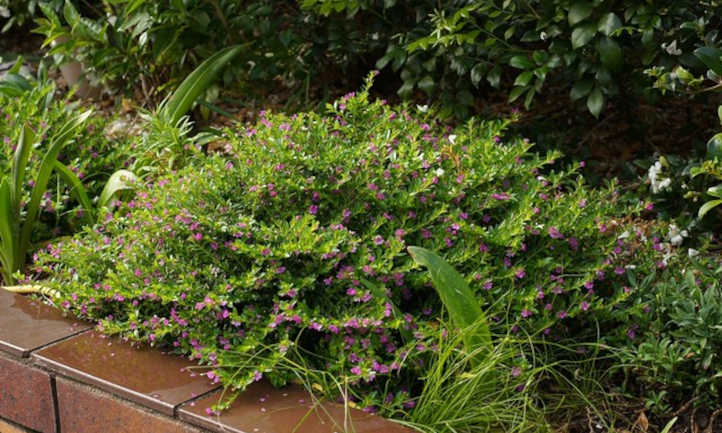 Mexican heather is a small evergreen shrub that is native to Mexico. It tolerates high summer heat and prefers full sun. This low-maintenance plant is a perennial in warm climates and can also be grown as an annual in milder climates. This small shrub makes an excellent border plant and is a fantastic addition to any pollinator garden. It has small white, pink or purple flowers.

Mexican heather plants go by many other nicknames such as Hawaiian heather, elfin herb, or false heather. They’re most commonly identified by their bright green foliage and lavender flowers. This shrub tends to grow in a rounded shape and makes an excellent ground cover. Its lance-shaped leaves are what often cause confusion between this false heather and true heather plants.

Mexican heather plants do well in pots and therefore also make great container plants because of their compact size and low growth profile. They will flower year-round in tropical climates, but in areas that receive below freezing temperatures, they will need to be transplanted in early spring and will have a shorter growing season. They prefer well-drained soil and full sun so find a sunny spot in your garden or on your deck and enjoy this evergreen shrub, its beautiful small flowers, and all of the pollinators that it will bring to your garden.

All About Mexican Heather

Mexican heather (Cuphea hyssopifolia) is also referred to as Hawaiian heather, false heather, and elfin herb. As its name suggests, it originated in Mexico and has a native range that extends into parts of South America, but it has also become naturalized in Hawaii and can even be considered a weed. It is also commonly seen throughout the landscape in southern California. It readily self-seeds and will spread when provided with the right conditions. Plants in the Cuphea genus are known to attract hummingbirds and butterflies with their nectar-filled flowers.

Mexican heather plants have bright green leaves and small flowers. Green calyx tubes enclose the flowers until they are ready to bloom. Although they can also come in varieties that produce pink and white flowers, purple flowers are the most common. This shrub grows best in tropical regions and can survive as a perennial in warm climates. In cooler climates, it is recommended to wait until the last threat of frost has passed before transplanting out this tender summer shrub.

Cuphea hyssopifolia is mainly added to a landscape for ornamental purposes, however, plants in the cuphea genus are being studied for their ability to improve the soil for specific crops via crop rotation practices. Planting cuphea before planting wheat or corn has been shown to increase yields. In the garden, it is easy to grow in containers, has few serious pests, is relatively low maintenance, and will thrive when it is well watered and placed in an area that receives direct sunlight.

As mentioned above, Mexican heather care is relatively easy. It’s happy to absorb as many hours of direct sunlight as possible as long as it remains in well-watered, well-drained soil. Plant Mexican heather if you’d like to add these lavender flowers to your growing season.

Since Mexican heather is native to Mexico and South America, it tolerates high summer heat and needs 6-8 hours of direct sunlight per day. It has been known to be hardy enough to tolerate partial shade, although it may not bloom as intensely. Conversely, an area with too much direct sunlight may result in the foliage not reaching its full potentially bright green color. It does best in tropical climates that average 75-85 degrees Fahrenheit. For this reason, it is recommended to grow Mexican heather in USDA hardiness zones 9-11. It is extremely sensitive to frost and will not survive a light freeze (when temperatures reach 32 degrees Fahrenheit). It can survive extreme heat and even if parts of the plant die back, it will return each year in tropical regions.

Once Mexican heather begins to bloom it’s important to water regularly, at least weekly, if not twice a week during periods of drought. It’s best practice to water this plant in the morning so that the water has a chance to soak into the ground before evaporating during the heat of the day. As with most plants, it’s a good idea to avoid wetting the foliage to avoid the risk of disease and other foliar problems. For this reason, and because it can grow low to the ground, it’s easiest to water these plants with drip irrigation systems. This will ensure that they receive a deep soak while avoiding the issues mentioned above. Since Mexican heather can bloom year-round, it also requires year-round watering, though watering can be cut back during cooler periods.

Mexican heather plants can do well in a variety of soils (loam, clay, sandy) as long as it is well-draining. In its natural habitat, it generally grows in sandy, slightly acidic soil. Providing this plant with good drainage is probably the most important part of maintaining its overall health. Surrounding the base of the plant with a thin layer of mulch will help the soil retain moisture and decrease the need to water as frequently.

Mexican heather care is low maintenance and It is not necessary to fertilize these plants unless a poor soil condition exists. In which case, a granular slow-release fertilizer at the beginning of the season will suffice. Adding a thin layer of organic matter around the base of the plant each year will help retain soil quality.

Mexican heather plants are a very low-maintenance shrub when it comes to pruning. This small shrub doesn’t require any pruning at all, however, if it begins to look overgrown or if you would like to give it a more rounded shape, then it can be lightly pruned in the early spring. The tips of branches can also be pruned back in early spring or late winter to encourage bushier growth.

Mexican heather plants are known to self-seed readily and for this reason, they can spread uncontrollably if left unchecked. They can also be propagated by taking cuttings. Snip a healthy branch and place it directly into a pot of soil or glass of water until roots develop and then plant it in its new location.

The easiest way to propagate this plant, however, is to dig up the entire plant, including the root ball, and cut it in half vertically. Then the two halves can be replanted.

As mentioned above, providing this plant with good drainage, full sun, and fertile soil will result in healthy plants. There are,  however, some issues that can crop up.

As mentioned above, Mexican heather care is very low maintenance. However, root rot can become an issue when this plant is located in an area with poor drainage. Overwatering can contribute to this issue as well. The bright green leaves are an indicator of the plant’s overall health. If they begin to turn yellow, this may be a sign that the plant is being overwatered. When growing this plant in containers, be sure that there are drainage holes in the bottom to help avoid this issue as well.

This false heather is not frost-hardy at all. Once the temperature reaches 32 degrees Fahrenheit the plant with suffer frost damage and once the soil freezes, the plant will die completely. If it’s being grown in any USDA hardiness zones that receive freezing temperatures then it’s recommended to only plant it out in the spring after the last threat of frost. If a late spring frost should arrive after it has been planted out, then provide it with a cover or bring it indoors.

The most common pest issues for these plants are spider mites, flea beetles, and other small soft-bodied insects that feast on foliage, like aphids. Spider mites are most likely to appear on plants that are grown indoors since they’ve been removed from an environment where their natural predators would keep them in check. Neem oil will kill them, and their eggs, on contact. Insecticidal soap can also be used. Spray once a day every few days until they have all been killed. Flea beetles and aphids are more of a nuisance than a real threat to this plant. Spraying them off with water will get rid of these pests.

There are no known diseases that plague the green foliage of this evergreen shrub. Any visible damage to the stems and leaves is likely caused by the pests mentioned above.

Q: Is Mexican heather a perennial or an annual?

A: This is a perennial in its native growing habitat, but in colder climates can be grown as an annual

Q: Does Mexican heather last through the winter?

A: It can not handle frost and will not survive freezing temperatures.

A: It has come to be considered a weed in some areas of Hawaii due to how easily it spreads by seed.

Q: Does Mexican heather come up every year?

A: It will bloom year-round in tropical climates.