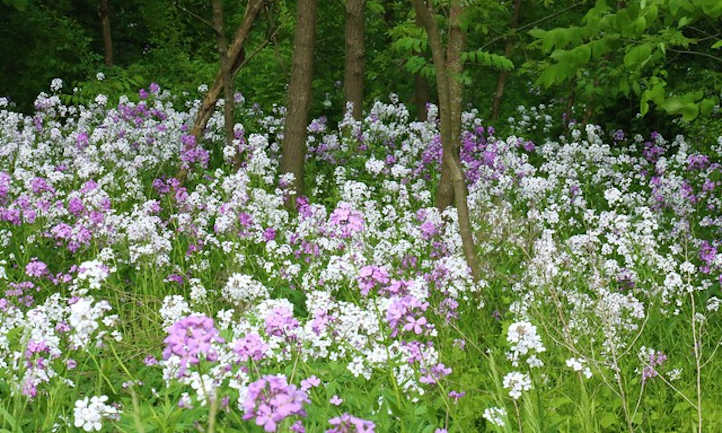 Dames rocket, sometimes called dames violet or dame’s gilliflower, is an attractive herbaceous plant with lovely flowers. Popular for centuries, this plant is among the many chronicled in John Gerard’s “The Herball or Generall Historie of Plantes”, originally published in 1597:

“Dames Violets or Queenes Gilloflowers, hath great large leaves of a darke greene colour, somewhat snipt about the edges; among which spring up stalkes of the height of two cubites, set with such like leaves; the flowers come foorth at the toppe of the braunches, of a faire purple colour verie like those of the stocke Gilloflowers, of a verie sweete smell, after which come up little long cods, wherein is conteined small long blackish seed. The roote is slender and threddie. The Queenes white Gilloflowers are like the last before remembred, saving that this plant bringeth foorth faire white flowers, and the other purple. They are sowen in gardens for the beautie of their flowers. They especially flower in Maie and June, the second yeere after they be sowen.”

But many plants which are beautiful and popular are also difficult, and dame’s rocket is no different. This species is fast-spreading, and quickly naturalizes in meadows and woodlands. It’s often considered invasive.

Let’s talk about this merrie olde plante in more detail. If you keep it in check, you can enjoy the “Queenes gilloflowers” too!

Native to Europe and Asia, dames rocket has spread around the world. It’s often seen here in North America as both a garden annual and a wildflower.

Technically speaking, it’s a tender perennial or a biennial. This species survives usually for two years. In its first year, it develops its structure and foliage, its roots spreading out beneath the soil. But in its second year it begins to bloom, and it easily self-sows during that year. Any plants that survive for a third year will also be able to bloom.

In this way, once it’s become established in a garden, you’ll see flowers every year. On warm days, the plant produces a sweet and unique aroma that becomes stronger towards the evening. This fragrance is appealing and part of the popularity of the plant.

Rapidly branching, dame’s rocket can spring up to a height of around 3-4 feet and spread to about 18 inches wide. The leaves are slightly hairy and form on short stalks. Wedge-shaped, these leaves can develop a slightly toothed edge towards the base of plants, but remain smooth-edged higher on the plant’s stem.

The leaves also have another side benefit. While slightly bitter, they are edible. This is likely part of where the term “rocket” began to be applied to Hesperis matronalis. Arugula is a related species, and as it’s also referred to as rocket the name likely originated there.

Blooming occurs from late spring into summer, most commonly in May and June. It’s a short period during which purple or white four-petaled blossoms appear. Similar in appearance to phlox, these rocket flowers are roughly a half-inch in diameter and create a riot of color across the plant. Some cultivated forms produce double-layered flowers, but most are a single four-petaled flower.

This member of the mustard family develops four-inch seed pods filled with pitted brown seeds. When the pods dry, they easily break open to spill the seed onto the ground. Its root system is shallow, comprised of a taproot surrounded by a tangle of rough secondary roots.

Hesperis matronalis has many common names, ranging from the queen’s gilliflower (as described by John Gerard) to other terms. Rogue’s gilliflower, mother-of-the-evening, damask violet, summer lilac, and many other names have been applied to these plants. But most commonly, it’s referred to as dames rocket or dames violet.

The growth habits of dame’s rocket have been described as “explosive”. While it doesn’t laterally spread, the self-sowing seed pods should be removed before they fully dry to prevent further development.

The easiest way to stop its spread is to deadhead spent blooms before they start to form those pods. But you’ll have to look closely, as it can still be flowering while forming seed pods!

If it’s already begun to take over, you’ll need to remove the entire taproot to prevent an invading rocket plant from growing back. While the rest of the root system is easy to remove, that taproot can get quite deep, so be prepared to do a bit of digging if it gets out of hand.

Other than being a bit on the invasive side, dame’s rocket is surprisingly easy to care for. Let’s go over the best conditions to guarantee success!

Full sun is perfect for these plants if you’re in cooler climates, but those in warmer ones may want to provide partial afternoon shade to protect their plant. It grows well in zones 3-9. Much of north America falls into the dame’s rocket growing range!

Aim for a minimum of six hours of sun whenever possible. It it’s not scorchingly hot, longer is preferred.

This species is not frost hardy. Sow once the danger of frost has completely passed. It prefers a temperature range of 70-85 degrees for best growth.

Consistent watering of about an inch per week during non-rainy weather is the best way to maintain your dame’s rocket. Be sure that excess moisture freely drains away, as soggy soil can lead to root rot.

While it’s tolerant of extra humidity indoors, most outdoor plants don’t need it as long as they’re consistently watered. Adding mulch around your plants also will help keep the humidity up. Indoors, provide a pebble tray with water underneath your pots to combat the typical dry conditions found in a central air environment.

As long as the soil is well-draining, Hesperis matronalis will grow in it! It’s tolerant of all types of soil, but performs the best in a blend of sandy soil and loamy soil.

Tolerant of multiple pH ranges as well, it can grow in pH levels ranging from 5-8. Aim for a neutral range and it should be fine.

You really don’t need to fertilize dame’s rocket. This plant needs only the slightest bit of soil nutrition. Applying about an inch of compost around your plants once a year should be plenty of fertilizer for their needs.

Propagation of dame’s rocket is from seed. Most of the seed this species produces has a germination rate of about 70%, meaning that 70% of the seeds sown will sprout.

Lightly sprinkle your seeds across the surface of the soil, adding just enough to cover them by about twice their depth. Make sure you keep the potting mix damp, but not soggy. Place your pots somewhere sunny, as they require a 70-85 degree soil temperature range to germinate.

While it is possible to grow dame’s rocket from stem cuttings, they don’t root particularly well. Use of a rooting hormone may help them to produce better roots. Rooting hormone is widely available in garden shops across the United States.

Most of your pruning will center around keeping the plant trimmed down to a reasonable height and deadheading flowers or seed pods. In the late summer, trimming it back to a shorter height is recommended to prevent self-seeding.

It grows like a weed, so keeping it alive isn’t your major concern. But what about keeping it healthy? Let’s talk about what few difficulties may arise.

Hesperis matronalis has very few growing problems. About the only one to be concerned about is sunburn during the height of summer. Providing some shade during the heat of the afternoon may help prevent scorching.

While hesperis matronalis’ white and purple flowers are lovely, this species can become invasive. Remove seed pods before they spring open to prevent an invasive spread to the rest of your landscape.

Flea beetles find the dames rocket flower and stems to be delicious treats. Use a pyrethrin or spinosad-based spray to kill these off, and neem oil to prevent them.

Snails and slugs will nibble on the leaves. An organic snail and slug bait keeps them away.

Powdery mildew is not uncommon on dame’s rocket. Neem oil is both a preventative and a treatment for this annoying problem.

Q: How does Dame’s rocket spread?

A: When the seed pods open, the seeds spill onto the ground around the plant. They may be carried elsewhere in the fur of animals who pass by.

A: Yes, the flowers and the plant are both edible, but can be slightly bitter to taste. The leaves and pods can be used as herbs while the flower is used in many dishes including salads.