Skip to content
Epic Gardening is reader-supported. When you buy through links on our site, we may earn an affiliate commission. Learn more
Fertilizer, Weeds

Corn gluten meal has gotten a weird reputation. Some people swear by it as a natural herbicide. Others claim it has no effect on perennial weeds whatsoever. But it is a potent natural fertilizer, either way!

We all think of corn as delicious food. It’s also now a reputable fuel supply, as it can be processed into ethanol. But in recent years, studies have shown that a principal protein in corn can be used as a fertilizer. While it doesn’t contain gluten, it’s called corn gluten or corn gluten meal.

Let’s explore this fantastic option and determine if it’s right for your garden space!

What Is Corn Gluten Meal?

Like other fertilizers such as cottonseed meal, corn gluten meal (CGM) is a byproduct. In this case, it’s a byproduct of manufacturing corn starch or oils to produce ethanol. It is a residue left behind by wet-milling.

A natural source of protein found in the endosperm of the corn kernel, corn gluten is a good nitrogen source. It averages at 60% protein for the wet-milled gluten. Other processing forms can render a 20% protein version which isn’t as effective.

On average, a 60% protein variation will result in a slow nitrogen release of 10%. As the CGM breaks down, it enriches the soil and adds organic matter.

It should be noted that this isn’t the same as the meal we make cornbread from. Meal is ground dried corn. While it contains part of the endosperm, it’s lower in protein. CGM is mostly endosperm, the food which corn plants rely on to germinate.

Not only is CGM a good fertilizer, but it acts as a pre-emergent weed control option. In the 90s, an Ohio State University professor released a study on the gluten meal. A naturally-forming component of the meal stifles root development. This only works if it’s in place prior to seed germination.

There’s a lot of debate about its efficacy as a pre-emergent weed controlling agent. While it’s used to good effect in lawn care, it can take quite a bit to have the desired effect. The 60% protein variant is more efficient than the lower protein choices.

Because it’s pre-emergent only, it may need to be applied at many times of the year. Fall and spring are best, to try to control both winter and spring weeds, but you may want to apply it monthly. It will work for 4-6 weeks before breaking down.

How Is Corn Gluten Meal Made?

The process of processing corn for oils or cornstarch results in this useful byproduct. To make CGM, there are two different methods, but they both start in the same place.

Harvested corn will be taken to a mill. At the mill, the corn will be cleaned and then steeped to soften the kernels.

Once the kernels have become soft, a coarse grinding stage happens. The resulting ground corn travels down one of two paths. One results in corn oil as well as CGM animal feed. The other results in cornstarch and a less-potent CGM.

For animal feed-grade gluten meal, the grinding stage then moves on to a germ separation stage. The germ is then pressed to extract oil.

The resulting pressed meal is blended with ground corn bran and some steeping liquid. This creates wet corn gluten feed (CGF). It may be kept loose or pressed into pellets. The resulting feed is then dried for long-term storage.

The other process also begins at the grinding stage. Unlike the meal for pressing oil, meal for extracting cornstarch requires further grinding. It’s then screened to remove bran, which is sent to the feed prep area.

The finely-ground meal is made into a slurry with water. It’s repeatedly washed and cycled through centrifuges to extract the starches. Once the cornstarch has been extracted, the water is removed and the meal dried into CGM.

Both forms work in garden usage, but typically CGF is lower in protein due to the addition of the bran. Feed-grade meal is usually 22% or less protein, and pure gluten meal is 60%.

As a natural fertilizer, CGM is a fantastic source of nitrogen. The typical NPK for CGM is 10-0-0. It’s slow-releasing, taking up to 2 months to break down in the soil.

For weed control, it’s an effective pre-emergent option if spread heavily on the soil. Lawns in particular are popular choices for this use. It retards the growth of many broadleaf weeds like dandelions. It’s also quite effective against crabgrass.

CGM does not have a significant effect on soil pH levels. This makes it a good fertilizer choice if you’re trying to maintain neutral soil.

And of course, as it’s a food-safe product, CGM is perfectly pet and small-child safe, too.

There are a few drawbacks to this byproduct, too.

As a pre-emergent herbicide, it does not stop weed seeds from germinating. What it actually does is kill off the fine root hair that emerges from the weed seeds. Unfortunately, it’s non-selective. It will kill off the stuff you want as well as what you don’t want, including weed seeds!

Because of its high nitrogen content, it feeds plant growth very well – maybe too well. Any existing weeds will feast on the nitrogen along with your grass. You will need to remove the weeds before using this product, so it can effectively choke out weed seeds.

Finally, the majority of corn grown in the United States is GMO. It’s estimated that as much as 99% of the corn grown now is from a GMO source. This means that most suppliers of CGM can’t get OMRI certification. If using GMO byproducts in your garden is a problem, this is one to skip!

How To Use Corn Gluten Meal

To use corn gluten meal’s natural herbicidal effect, it takes more than you would expect. A basic estimate is 20 pounds of meal for 1,000 square feet. That quantity increases if the soil is poor.

For lawns (especially in control of crab grass), you can use a spreader to evenly spread the meal across the entire lawn’s surface. This is especially easy with the pelletized and granular forms available.

Be cautious of using corn gluten meal in garden use if you plan on direct-sowing seeds. That natural pre-emergence herbicide may prevent your seeds from developing.

As a fertilizer in the garden, wait until your plants and flower seeds are already established. You can then lightly work it into the surface or top-dress with it, as desired.

In the fall, work some corn gluten through your soil and spread another layer over top. This will prevent winter and early spring weeds and start breaking down in the soil. If you plan on growing winter crops, be sure they’re already established first!

Wait to fertilize with corn gluten fertilizer until any seeds you’ve planted have sprouted and formed their first pair of true leaves. This ensures that they’ve already started to develop healthy roots. In the case of grass seed, wait until there’s at least 1.5″ of grass height before fertilizing.

While some people do mix corn gluten in water and make a corn gluten fertilizer tea, it is less effective that way. For a light weekly application of fertilizer, this is useful but much less potent than the meal is.

Because of its nitrogen content, corn gluten meal can be used to start the heat process in your compost. Toss a handful into your tumbler composter to speed up the process.

Where To Buy Corn Gluten Meal

Many big-box stores and garden centers sell corn gluten meal. Be sure to examine the label closely to be sure it’s corn gluten meal and not CGF! While CGF can work, it’s less effective as a pre-emergent herbicide. It’s also lower in nitrogen.

Options commonly available are granular or pelletized for easy dispersal. Powdered forms are far more popular but can be difficult to find in large quantities.

I like Espoma Organic Weed Preventer. Made from 100% corn gluten meal, it’s easy to use and apply. It’s one of two granular options I’m recommending, both of which are marketed as weed control.

The other granular option I’d recommend is Concern 98175 Weed Prevention Plus. Made by the makers of Safer brand products, this is also 100% corn gluten meal and will work well.

For a powdered option, I highly recommend Walt’s Corn Gluten Meal. It has a slightly higher nitrogen rating than both Espoma and Concern do, which I prefer. Be forewarned, this isn’t easily spread using a commercial lawn fertilizer spreader. You’ll have to spread it by hand. 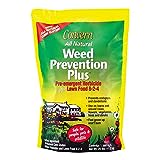 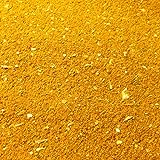 A: It should be 100% safe around small children and pets. It’s actually edible by humans, although it’s not very tasty, and it’s used in some forms of animal kibble. Having said that, keep your fertilizers secured and out of their reach.

A: CGM is not an OMRI-rated product. It is a natural product in that it is entirely made out of plant material. As it’s extracted from inside the corn kernel, it’s unlikely to be chemically contaminated.

It’s a safer alternative to chemical fertilizers and synthetic chemical herbicides, for certain. But it is not certified organic.

Q: Is corn gluten meal the same as cornmeal?

A: No. While cornmeal is simply ground corn kernels, corn gluten meal is a byproduct of corn milling, usually from wet grain milling.

A: It is! Especially if you’re hoping to maintain a neutral soil pH, corn gluten meal is great.

A: Contrary to what its name suggests, corn gluten meal contains absolutely no gluten. It’s called corn “gluten” meal because one of the purveyors of the product was a processor in a wheat gluten factory. The name has stuck ever since. Celiac-sensitive persons should be aware that there could be some contamination of wheat gluten in corn gluten meal products, however. Use caution if you are one of these people.

Q: When should you put down corn gluten?

A: You want to apply your corn gluten meal in spring before plants (like crab grass) and weed seed germination has really taken off in the growing season. This is also well after you’ve laid down turf grass seeds. Most regions require applications from April to May.

A: It is best used as a pre-emergent herbicide as it doesn’t suppress already growing perennial weeds and it does not stop weed seeds from germinating. It can smother out vegetable seeds and turf grass seeds, though.

A: No! It’s a non-toxic, non-chemical product. At worst you can suffocate grass if it’s applied too thickly, and if applied at the wrong time it can prevent seed germination of turf grass seeds. Otherwise it will not kill grass and will give you a weed free lawn.