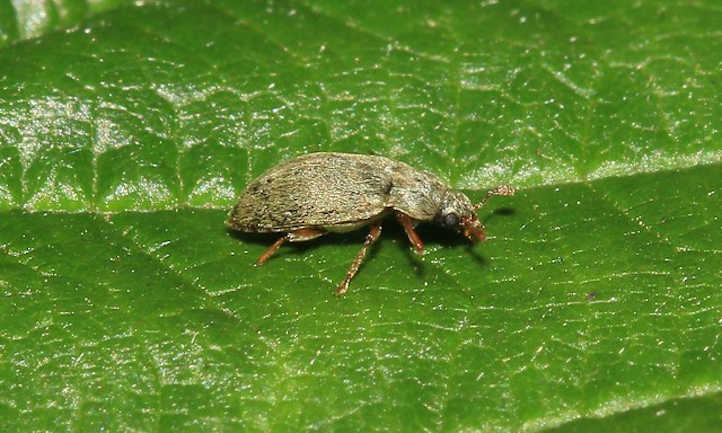 Fresh fruit makes such a lovely treat straight out of the garden. Fruiting plants like raspberries are great investments for your garden because they are perennial plants and provide fruits that are expensive to purchase and transport. Growing berries do come with their own unique challenges, one of which is the raspberry beetle, Byturus tomentosus. Another pest is the raspberry fruit worm Byturus unicolor, which will be covered in detail in another article.

Raspberry beetles are a major pest in areas of the world where raspberries are grown. They not only affect raspberries but also can impact other cane fruits such as blackberries, tayberries, boysenberries, or loganberries. The adult beetles cause damage to the early leaves and flowers of these plants and the larvae will eat through the fruits and can be a nasty surprise in your harvest!

Because these beetles only have one generation per year, they tend to cause the most damage to fruits that ripen in July. Fruits that ripen after August are less likely to be impacted since the population of larvae significantly decreases.

Adult raspberry beetles are pale brown in color and are around 4 mm (1/8 inch) long and their bodies are covered in tiny hairs. They originated from Europe where they are a major agricultural pest and were later introduced to other parts of the world including China, Japan, and California. These beetles are a nuisance to farmers since adults cause damage to leaves and flowers and larvae damage fruits and cause discoloration and contamination.

Life Cycle of A Raspberry Beetle

Adult raspberry beetles emerge from the ground in the spring and their population peaks in July. These beetles first feed on young primocane leaves and unopened flowers and then congregate to feed on opened flowers and stamens. Adult beetles will begin mating after the first raspberry flowers have fully opened.

In the one to three weeks following the opening of the first flowers, female beetles lay eggs. They will lay one elongated egg per flower, measuring at around 1.2mm long and 0.4mm wide. Eggs hatch during the green fruit stage and will almost all hatch by the pink fruit stage of the berries’ development. Due to their strategic position, newly hatched larvae will immediately begin feeding on young fruit. Each female beetle can lay up to 120 eggs! At this time, they can cause considerable damage to fruits as they eat and tunnel between multiple fruits. In the late summer, these larvae will move into the soil to overwinter as pupae before emerging as adult beetles the following spring.

Raspberry beetles overwinter in the soil at the base of their host plants. If you observe a raspberry beetle infestation one year, it is likely that you will have this pest the following year and need to be more vigilant when monitoring them from April onwards. As adults, these beetles can be seen on the growing tips of plants and on flowers. Similarly, eggs are laid onto flowers and the larvae will also be found on fruits formed from these flowers.

What Do Raspberry Beetles Eat?

Both raspberry beetle adults and larvae cause damage to cane plants. As adults feed on the growing tips of plants, they can cause interveinal damage to expanding leaves. They can also fly to move from different plants or along different heights of the same plant. Larvae damage occurs inside the berries and causes browning, discoloration, and an overall decrease in the quality of fruit production.

How to Control Raspberry Beetles

As with many other pests, we recommend taking an integrated pest management approach to control raspberry beetles so as to not cause harm to other wildlife and beneficial insects. Gardeners should be particularly vigilant with chemical controls because these beetles and larvae are found on flowers that attract pollinators. When possible, first start with non-chemical methods.

Sprays that contain pyrethrins and spinosad are effective against this pest. Carefully follow the instructions on your packet and do a test spray before using any product pervasively. Use the pesticide on raspberries at their pink-fruit stage and apply again two weeks after.

These bugs are visible to the naked eye. If you spot any beetles, hand-pick them off your plant and keep a close eye on susceptible plants if you have a history of infestations. Encourage the presence of natural predators in your garden such as birds, ground beetles, and hedgehogs.

There are several trap options on the market for home gardeners such as sticky white traps and water traps. The issue with sticky traps is that they are not specific to this species and may capture non-targeted insects. If using sticky traps, make sure to set them out early in the season when the plants initially sprout and place them so that they are not obstructed by too many leaves. Water traps use host plant odor to bait specific species and can be used to control both male and female raspberry beetles.

Home gardeners can also try a method called “beating” the canes, which involves putting fabric, tarp, or an old cookie sheet under the cane and vigorously shaking it without causing damage to the cane. Beetles will drop off the plant and can be killed off in soapy water. You may want to repeat this process throughout the spring and early summer and ideally before they lay eggs.

There are several species of wild berries that seem to be resistant to raspberry beetles. Agricultural researchers have been working to create commercially available hybrid plants with this resistance to help mitigate beetle infestations in the future.

Q: When should I spray my raspberry beetle?

A: We recommend using a combination of control methods and spraying when absolutely necessary. Because these beetles and their larvae eat the flowers of cane plants, spraying may cause additional damage to pollinators. If you must spray, spray at night when there is lower pollinator activity.

Q: Do raspberries have worms in them?