Skip to content
Epic Gardening is reader-supported. When you buy through links on our site, we may earn an affiliate commission. Learn more
Gardening Tips, Organic Disease Control, Organic Pest Control

Horticultural Oil Vs Neem Oil: When To Use Each 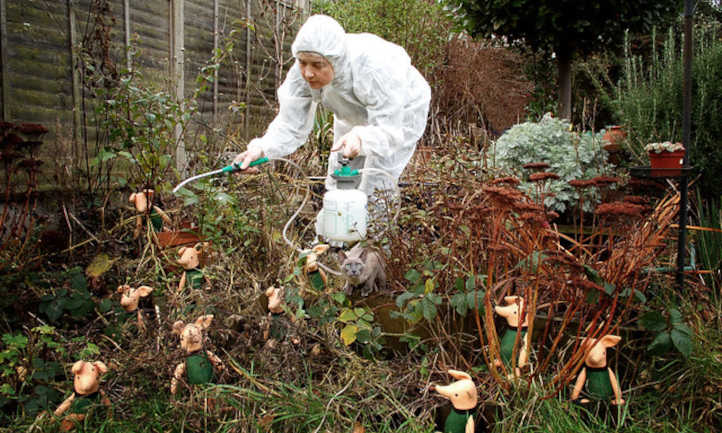 Horticultural oil vs neem oil: who will win in this epic battle? Or are they the same thing? They’re super similar, and that’s because horticultural oil is an umbrella term for natural oils (previously known as dormant oils) that are made from vegetables, plants, and minerals. Neem oil comes from the neem tree, so it’s a type of horticultural oil.

Neem oil is a bit different than other horticultural oils, which may be why it’s mistaken to be something completely different altogether! Most horticultural oils are best used as preventative measures for pests and plant diseases, but neem oil contains an ingredient that allows it to act as an active pest control method whenever you need it.

All types of horticultural oils should have a use in your garden because they have very few drawbacks and almost no negative environmental impact! Let’s get into how neem oil stands out from the rest of the oils so you can learn how to put them to use in your garden.

Good Options At Amazon For Horticultural And Neem Oils:

What Are Horticultural and Neem Oils?

Horticultural oil and neem oil are naturally-derived oils that used to be referred to as dormant oil. Mineral oils and vegetable oils like canola oil, cottonseed oil, and soybean oil are all classified as horticultural and can be used in the garden to prevent pests and diseases.

You’ll probably see these in the form of spray oils because they’re super easy to apply to your garden for insect control. Some are ready to use (RTU), while others come in the form of concentrates that you need to mix with water before using.

Many oils are suitable for organic gardening and plant tissues, but not all of them are. It depends on how the oil was made and if anything was added to it. You’ll have to check the label to make sure it’s organic if you don’t want harmful chemicals in your garden on plant surfaces.

There are a few things that set neem oil apart from the rest of its horticultural oil cousins, so let’s get into those.

Several categories of horticultural oils will determine when and how you can use them on your plants. Dormant and delayed dormant oil sprays have a mode of action meant to be used before woody plants, herbaceous plants, and fruit trees start budding in the spring. Summer oils are meant to be used when plants are blooming, and all-season oils have an all-year-long mode of action as long as the temperatures aren’t below freezing or above 90°F (32.2°C).

Horticultural oils are also classified by refinement. You’ll most likely see highly refined horticultural oils in stores, as they’re the most effective and are more likely to be organically certified.

Horticultural oils are typically used to prevent diseases and pest infestations. You can spray the oils early in the growing season to prevent fungal diseases like powdery mildew from forming. If you see insect eggs or young larvae, you can spray them with these oils to suffocate them and kill them while they’re young. Horticultural oils can’t cure diseases and aren’t always as effective against adult pests, so that’s why it’s so important to use them sooner rather than later.

Neem oil is a type of horticultural oil, so most of what was said previously will apply to this one! Neem oil is often classified as an all-season oil, so it’s a good one to keep around as an all-purpose plant.

The key difference that sets this oil apart is azadirachtin, a naturally-derived chemical compound that can be found in neem oil. This chemical can kill pests which is what allows neem oil to be used as a pesticide for pests of any size all year long.

It’s a bit of a miracle oil in comparison to other horticultural oils since it can help kill off existing fungal diseases! It likely won’t get rid of all fungal diseases, but if you catch an outbreak early, you may be able to stop it in its tracks.

How These Oils Are Used In The Garden

Horticultural oils should never be sprayed in extreme temperatures that are freezing or above 90°F (32.2°C). When the oils are applied at these temperatures, they can cause injury to your plants and won’t be as effective. Remember that summer oil doesn’t mean it can withstand high temperatures—it just means you can apply them while the plants have leaves!

Most spray oil products work in the same way: you spray them on plant foliage where you see pests or the beginnings of a fungal infection. Remember that different types of oils (dormant oils, highly refined oils, and superior oils) may have slightly different application requirements, which is why it’s so important to make sure you read the product label before you use it.

When you apply horticultural oil sprays, be sure to get thorough spray coverage by getting the entire plant, including the tops and bottoms of the leaves and the stems. The oils kill plant pests by suffocating them, so be generous with the application.

Unfortunately, horticultural oils aren’t selective about what kind of insects they kill, so they can put beneficial insects like bees at risk. You can minimize the risk by spraying early in the morning or in the evening after the pollinators have left your garden. As an extra precaution, avoid spraying flower heads where pollinators land so the residue left behind won’t be a threat.

Benefits of Horticultural and Neem Oils

Horticultural oil products are loved by organic and non-organic gardeners alike because they’re virtually non-toxic to living things that aren’t soft-bodied insects. People and pets may have irritation if it comes into contact with the eyes, nose, mouth, or skin, but it shouldn’t be anything more than uncomfortable.

Since these oils are naturally derived from plants and minerals, pests are less likely to develop a tolerance, meaning you can keep using them in your garden year after year. Pests can build tolerances to inorganic chemical insecticides, making them ineffective over time. Horticultural oils aren’t susceptible to this problem, and you can always switch up what kind of oil you’re using if you think it’s not working like it used to.

Many horticultural oils are certified organic since they come from the earth. The only exceptions are if the plants the oils were made from weren’t treated organically or if inorganic ingredients were added to the oil. Another great thing about these natural oils is that they can actually encourage earthworms in your soil, so you don’t have to worry about residue ruining your soil!

Horticultural and neem oil products are generally budget-friendly, so they’re easy to keep in your garden. Of course, it will depend on the brand and size of the products and the retailer you buy from, but you can typically find reasonable prices that won’t break the bank.

Horticultural and neem oils control pests of all kinds, so they’re a great addition to have in your garden! They can kill caterpillars, scale insects, soft-bodied insects, and mites (including spider mites). Horticultural oils, in general, kill many common garden pests, but each type usually targets a specific kind, so you’ll need to read the package label to make sure it’ll help you the way you need it to.

Downsides of Horticultural and Neem Oils

Horticultural oils do have their downsides. Since they can only be used in a specific temperature range or only at certain times of the year, you may find them to be a bit annoying to work with if you have a pest infestation on a hot summer day during the growing season!

There are some sensitive plants that you can’t use these oils on, too. Some grapes and roses don’t do well when sprayed with these oils, and many shade trees, including maple, cedar, juniper, and spruce, also react negatively. If you spray horticultural oils on a windy day, it can travel and injure sensitive plants, so you need to pay close attention to the weather when you’re spraying.

Stressed plants are also sensitive to horticultural oils. New transplants, diseased plants, or plants that are dried out or wilted may have adverse effects when sprayed with horticultural oil. It’s best to try to relieve the plant of its issues before you spray it.

As previously mentioned, horticultural oils aren’t truly non-toxic. They’re safe to use around people and pets, but getting it in your eyes or on your skin or ingesting it can be quite irritating and may cause redness. Children may be more susceptible to irritation, so it’s a good idea to keep them away from the area when you’re spraying. It’s also slightly harmful to amphibians and fish, so it’s best not to use horticultural oils on aquatic plants.

Horticultural oils are most effective when they’re wet and don’t offer much pest control once they’re dried. Neem oil is usually more effective than other oils when it’s dry, but it’s still better when it’s wet. This means you’ll need to spray insect pests or eggs directly when you see them rather than doing it before they show up.

Q: Is horticultural oil the same as neem oil?

Q: Can I use neem oil instead of horticultural oil?

A: Neem oil is often used as a multipurpose pest and disease control in the garden. Neem oil contains a natural chemical called azadirachtin that other horticultural oils don’t have, which allows it to be more effective at pest control than other oils.

Q: What plants do not use neem oil?

A: Don’t use neem oil on stressed plants, including new transplants or plants that are wilted or need water. Some trees and roses are sensitive to horticultural oils and shouldn’t be treated with them.

A: You can use horticultural oil on your vegetable plants, but try to avoid the vegetables and wash them before you eat them. Horticultural oil is virtually non-toxic to people and pets. Still, it may cause irritation if you come into contact with it. Washing your food before eating it will keep you safe.