Skip to content
Epic Gardening is reader-supported. When you buy through links on our site, we may earn an affiliate commission. Learn more
Herbs 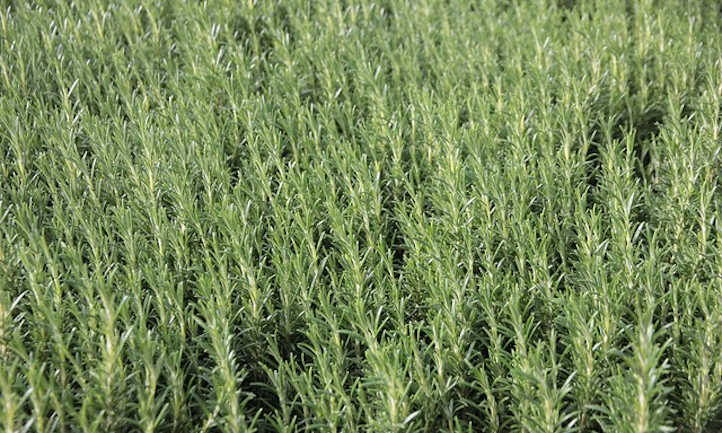 Here are just a few reasons why you should be growing rosemary in your garden. Firstly, it is delicious!  It adds beautiful flavor and aromas to everything from bread to chicken; is simple to use and available to harvest all year round.

Secondly, it smells amazing!  Add rosemary stems to bouquets, wreaths, potpourri, or use essential oils around the house to make it smell fabulously fresh.

Thirdly, it looks great in the garden! Rosemary can be grown as an ornamental hedge or cascading over the edge of a pot or wall. You can even prune rosemary into whatever topiary shape takes your fancy.

Finally, rosemary is good for your health!  Recent studies have discovered the powerful therapeutic benefits of this wonderful herb. Research has demonstrated that rosemary helps to lower anxiety, improve concentration, and boost memory.  Rosemary extract has also been used successfully in both breast and colon cancer treatment where it was observed to inhibit the development of cancer cells. Research is ongoing in these areas, but the results are looking promising.

Read on to learn all about this amazing herb and how to grow it.

Clues to the origins of rosemary lie in its botanical name rosmarinus, taken from the Latin ros, meaning ‘dew’ and marinus, meaning ‘of the sea’. It is native to the hills and coastal regions of southern Europe and North Africa where the soils are poor and well-draining and the climate is warm and humid. Despite these Mediterranean origins, rosemary has adapted well to cooler northern climates.  Some new rosemary plant cultivars are tolerant to 14ºF (-10ºC).

Salvia rosmarinus is a perennial, evergreen woody shrub with aromatic foliage.  It has soft pine needle-like dark green shiny leaves with rolled margins and pale gray/green felted undersides.   The stem is brown but can appear almost white due to the same soft leaf felting. Clusters of 5-10 small (0.4inch/1cm) tubular, two-lipped flowers are produced in whorls around the stem and range in color from blue, pink, purple, and white.  Flowering begins in spring but often repeats during the summer months providing rich nectar for pollinating insects.

People underestimate how large and woody a rosemary plant can become if left to its own devices. Slow to grow in the early years, rosemary can reach 6-8 feet tall (2-2.5metres) and the same across within 10 years. Plants are easily maintained through annual pruning to keep them manageable and to produce new fresh growth for harvesting and cuttings for propagation.

There are many different cultivars of rosemary to choose from varying in hardiness, flower color and aroma strength. They fall into two distinct categories, bushy upright plants growing to a height and spread of 4-8ft (1.2-2.5m) and creeping ground cover or trailing types also known as ‘Prostratus Group’ cultivars.  These are best grown in containers and rockeries and have a height of 2 inches to 1ft (5-30cm) and spread of 4-8ft (1-2.5m) depending on the variety.

Fresh leaves and stems can be used to add flavor to lots of different culinary dishes or dried for longer-term storage. Use a bare stem as a skewer to hold meats or vegetables together while grilling or use sprigs of rosemary as a basting brush for barbecues and roasts.

Container growing is perfect for all types of rosemary plants.  Potted rosemary can be conveniently located at your kitchen door for quick harvesting and easy access to bring indoors in winter if frost is forecast.  A pot-grown rosemary plant will require more water than a plant grown in the ground.

The rosemary plant has been used by cultures across the globe for a long time.  The ancient Greeks burned rosemary as part of ancient religious ceremonies and believed it to be deeply cleansing.  Planting rosemary in the garden is also a symbol of remembrance for those who have passed.

Plant rosemary in spring after the last frost or a few weeks before the first frosts of autumn. Rosemary prefers to grow in well-drained moderately fertile soil in full sun.  Sudden temperature extremes and heavy wet soil will kill young plants. Grow rosemary in a pot if ground conditions aren’t suitable, adding approximately 20% sharp sand or horticultural grit to the compost mix. A terracotta pot works best allowing excess water to evaporate.  Rosemary can grow indoors if you provide adequate light. A bright south-facing window, conservatory, or greenhouse is perfect.

Germination rates can be as low as 30% if you grow rosemary from seeds, so it’s best to sow more seeds than the number of plants you need.  Rosemary plants are easiest to propagate from softwood cuttings in spring, or semi-ripe cuttings in late summer/early autumn. Once roots have developed the cuttings are ready for planting into the garden spaced 3ft (90cm) apart.

Rosemary is easy to care for once you get the basics right.  Follow the guidelines below and you will be harvesting fresh rosemary in no time!

For best results grow rosemary in full sun with at least 6-8 hours of sunlight in USDA hardiness zones 7 or above.  Some cultivars can be grown in hardiness zones 5 and 6 with winter protection. Think of the Mediterranean when considering the ideal temperature range for rosemary, low 0ºF ( -17 ºC) to high 80-90 ºF (27-32 ºC).

Rosemary can go a long time without water except during periods of prolonged drought. Unlike broadleaf plants, rosemary’s needle-like leaves do not wilt so it is difficult to know when they need water.  Plants in containers will need to be watered when the soil is completely dry.  Water the base of the plant at soil level in the morning using a can or soaker hose, giving the plant a good long drink. Let the soil dry out between waterings.  Roots sitting in overly-wet soil can develop root rot, so it’s best not to water in winter.  A rosemary plant grown in high humidity and poor air circulation is at risk of fungal diseases.

Grow rosemary in well-draining, dry, sandy soil with poor to moderate fertility.  It is tolerant of a wide range of soil pH from 5 to 8 but grows best in a soil pH of 6 to 7.5.

Rosemary growing in the ground does not require fertilizer unless a plant shows signs of decline such as dry, yellowing foliage.  On these occasions provide a balanced liquid feed.  A light organic mulch added to the base of rosemary in late autumn, will provide the roots with frost protection over winter. A container grown plant will require a balanced liquid feed in spring.

Rosemary bushes should be pruned to maintain size, shape and to encourage new growth for harvesting. Prune shrubs when flowers have faded in late spring or early autumn.  Be careful not to cut back too hard into old wood as the plant will struggle to regrow. Trimmings can be used as cuttings for propagation.

It’s easy to grow rosemary from seed, cuttings, and air-layering.  Check out our guide on how to propagate this amazing herb.

Rosemary can be used fresh or dried.  Follow the guidelines below for more information on how to harvest and store this aromatic herb.

Harvest rosemary from plants that are at least one year to 15 months old.  The best flavor comes from new growth that is green and not woody. Try not to harvest too much at once from a young plant which may struggle to recover.

Fresh rosemary cuttings will store for 1-2 weeks in the refrigerator if stems are placed in a glass of water or wrapped in a damp cloth.  Alternatively, the foliage can be finely chopped and frozen in ice-cubes or freezer bags.

Dried rosemary does not have as strong an aroma as fresh or frozen, but will store for longer.  Hang stems of rosemary indoors in a cool, dry location and allow to dry out thoroughly.  When completely dry, remove leaves and store in an airtight container.

Rosemary is a pretty easy plant to grow, but like most plants there are one or two things to look out for which may cause problems for your rosemary plants.

A potential rosemary plant problem comes from over-pruning.  If branches are cut back too harshly the plant will struggle to recover and will remain woody and bare.

Rosemary beetle (Chrysolina americana) feeds on lots of herbs, rosemary, sage, and thyme to name a few.  They will not kill or damage the health of the plant but will affect the quality of harvestable leaves as adult beetles and larvae feed on them.  Adults are less than ¼ inch (6-7mm) long with metallic purple and green stripes.  Larvae are grey/white with darker stripes.  Both are active from spring to late summer. Control measures include handpicking beetles and larvae from affected plants and encouraging predatory wildlife into the garden such as birds, frogs, and ground beetles.  Organic insecticides with natural pyrethrins can be used but will require several applications.

Spider mite (Tetranychidae) adults are reddish-brown, living in large colonies and thrive in hot, dry environments.  Spider mites can be seen as fine webbing between the leaves and stem. Plants will also show signs of decline as leaves turn yellow and drop off.  They are resistant to most pesticide products on the market so it’s best to remove and destroy the worst affected parts or entire plants to prevent the problem from spreading.  Neem oil can be used to smother mite eggs.

Growing rosemary plants in cold, wet soil can lead to plant roots rotting. Root rot suffocates the plant preventing it from accessing essential nutrients.  Telltale signs include limp branches and die back from stem tips.  Plant rosemary in well-drained sandy soil and water only when necessary.

Powdery mildew is a fungal disease that can affect rosemary in hot, humid, shaded conditions.  It grows as a white thick dust on leaves, inhibiting photosynthesis and hindering growth.  Foliage eventually turns yellow and dies.  It won’t kill the plant, but it will reduce its vigor and the availability or harvestable leaves.  To prevent powdery mildew maintain good garden hygiene, removing infected foliage to prevent the disease from spreading and reinfection in subsequent years.  Provide adequate sunlight and avoid conditions the disease thrives on.  Prune overcrowded areas to allow good air circulation. Spray with an organic fungicide such as sulfur, neem oil, or potassium bicarbonate prior to or on first sight of disease.

Q: How do you encourage rosemary to grow?

A: Provide the right growing conditions in your garden to encourage your rosemary plant to grow.  This includes planting in free draining soil, in full sun and bringing plants grown in containers indoors to protect from winter frosts.

Q: How fast does rosemary grow?

A: Rosemary plants are slow-growing. If grown from seeds it can take up to 15 months before reaching maturity and 1 year if grown from cuttings.