Skip to content
Epic Gardening is reader-supported. When you buy through links on our site, we may earn an affiliate commission. Learn more
Foliage 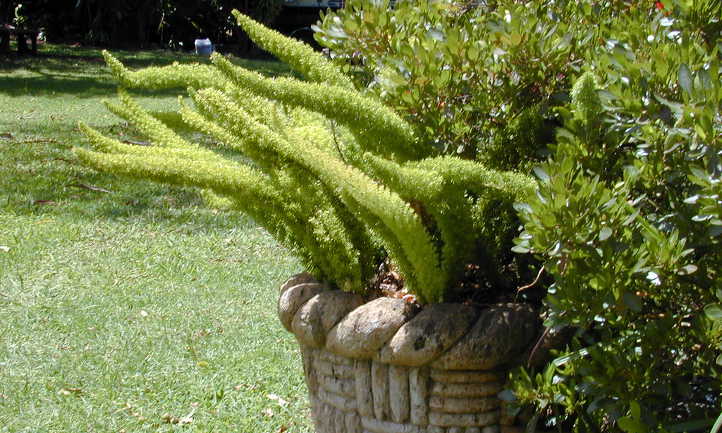 If foxes were green, you can bet this is what their tails would look like. Similar to the animal, foxtail fern fronds are long, lush, and look soft enough to cuddle. The tails, also called spears or stems, are cylindric shapes that rise and twist from the ground. The leaves are evergreen and look like soft pine needles. Don’t be fooled by the plush and delicate aesthetic though. These plants are tough and dominating.

Foxtail ferns are low-maintenance because they’re good at taking care of themselves. It’s all thanks to their root system. This plant has tuberous taproots that grow into quite an extensive system. It easily conquers other, weaker-rooted plants underground. The taproots also store water in preparation for the occasional drought. The plant itself isn’t too picky about its conditions, as long as it’s kept out of the cold.

You can use a foxtail plant to add texture to your landscape or life to your home’s interior. Foxtail ferns are even used in floral arrangements, thanks to their long lifespan after being cut (2-3 weeks!). No matter what you grow it for though, you’ll need to know some details about helping this vivacious plant thrive.

All About Foxtail Fern

It may surprise you to learn that the foxtail fern isn’t a fern at all. It’s actually a member of the asparagus family and reproduces by seed, not spores. The fern reference likely comes from the clumpy way this plant grows, which resembles a fern. At one point it was classified as a member of the lily family, but it has been since reassigned and is no longer part of the lily family.

A perennial, the foxtail fern grows to about 2-3 feet tall and wide. Because it comes from warm South Africa, it’s only evergreen in climates with mild winters. If you live in zones 9-11, you’re one of the lucky ones that can grow it outdoors year-round. Don’t worry if you live in a cold place though, as foxtail ferns grow just fine indoors.

Asparagus aethiopicus is a slightly different species that are often confused with Myers fern. Like Myers, Sprenger’s asparagus is referred to as asparagus fern and sometimes foxtail fern. No wonder people are confused!

Also called asparagus grass, the Sprenger’s asparagus stems droop downward instead of sticking up, making them a fun choice for hanging baskets. It is not the same species but comes from the same part of the asparagus family. Its care is similar to A. densiflorus, but it’s no longer considered part of the same species. The plant produces the same red berries and white flowers as its relative does. It’s an excellent choice to pair with your other foxtail fern plants to create layered beds.

As we mentioned, the foxtail fern is pretty easy to care for. Once you understand their basic needs, we doubt you’ll have any problems!

Asparagus ferns need partial sun and shade. They can handle full sun in the morning, but not the direct heat of the afternoon. When indoors, give it bright but indirect light. If it doesn’t get enough light, the foxtail fern may turn yellow.

The ideal temperature is 65-70° F. However, Asparagus densiflorus can tolerate lower temperatures as long as they remain above freezing.

Fox tail plants can be damaged when exposed to temperatures below 25° F and should be brought inside in the winter. In some cases though, mature foxtails have been known to survive the occasional frost.

Because the taproot stores water, foxtail fern needs to be watered like a mild succulent. You should let the top three inches of the soil dry out before watering again, but no more. Depending on the climate, you’ll likely water at least once a week. Foxtail ferns can handle the occasional drought, but this shouldn’t be a regular thing.

Water your foxtail fern deeply, which encourages the roots to grow downwards as they chase the water. Be wary of overwatering, which is an easy threat to this plant. The soil should be moist but not soaked.

If your asparagus fern lives indoors, it may need added humidity. You can do this by placing the container on top of a tray filled with wet rocks. This plant also loves to be misted with a spray bottle.

Foxtail fern isn’t too picky when it comes to soil. Well-draining soil is required to prevent the plants from being in standing water, but otherwise, it is tolerant of most soil types. Slightly acidic soil may help it grow better.

If you have compost available, feel free to use it as mulch or mix it in at the time of planting. Your plants will enjoy the added organic material. If it’s rich compost, you may be able to use that instead of normal plant fertilizer.

Asparagus ferns get pretty large, so you may need to re-pot if you’re growing them in containers. Increase the container size slowly each time you re-pot, as too much soil around the root system can retain unneeded water.

If the plant becomes rootbound, roots might start growing up out of the soil. You need to either size up the pot or divide the plant to make it smaller.

Division is how you’ll propagate your foxtail fern. This process is easy and fast to do.

Remove the entire plant, soil and all. Dust off any loose soil that the root system isn’t clinging to. Then, with the plant laying on its side, cut the root mass with a clean knife. You can divide it into more than two pieces as long as each segment has multiple leaves and it doesn’t cause too much root damage. Place them in their new and separate containers, using fresh potting soil.

If your plant is in the ground and rather large, you don’t have to dig it out to divide it. Using a sharp-tipped spade, slice through the center of the plant. Loosen the soil around the portion you want to remove, then gently extract it from the ground. You may have to sever the roots further in order to fully separate the section.

Once you have the divided section out of the ground, clean it up a bit by removing dirt, debris, and dead or rotten roots. If it’s too large for the area you’re planting it in, you may be able to divide it a second time and get two new plants.

After dividing and replanting, care for your “new” foxtail as usual. It will take a few years for the new plant to really establish itself, so don’t move it or change its pot for a while.

As long as you give your foxtail ferns enough space, pruning isn’t necessary. However, cleaning it up once or twice a year can boost its health and growth. Simply clip off any foliage that’s dead, dying, or unappealing.

Sometimes, foxtail ferns grow so dense that the new, lower growth is smothered. You can leave it like this if you’d like. Alternately, prune the oldest stems so new growth can replace them.

Very few gardeners report pest or disease problems with asparagus fern plants. As long as you remove dead growth and clean up debris around the plant, you’re on track for good plant health!

If your foxtail fern plant is browning or dropping leaves, there are two common causes: too much light or not enough water. Remedy this by moving your plant’s location or adjusting your watering frequency.

In the few cases where pests bother foxtail fern plants, it’s usually scale insects. These appear as ugly little lumps attached to the leaves or stem of the plant. Mealybugs, a common type of scale insect, are white with lots of short legs. They’ll feed on the plant’s sap, which will eventually kill it. Most plants show initial signs of infestation with discoloring or droopiness.

Neem oil is an excellent organic insect repellant. If you only see a few scale insects on the plant, a cotton swab dipped in rubbing alcohol can be used to remove them individually.

Like a succulent, a foxtail fern’s root stores water for potential droughts. Unfortunately, this makes it vulnerable to fungal root rot if overwatered. Prevent overwatering by frequently checking that the soil is draining well and mostly drying out between waterings.

If the roots are already rotting, you’ll have to dig up the plant and cut off the diseased tubers. Otherwise, they become a breeding ground for rot that can spread to the rest of the roots.

Q: Why are the stems of my foxtail fern turning brown?

A: It’s normal for old stems to turn brown as they die. If more than a third of the plant is turning brown though, it likely needs water. While not all of the foliage will revive after a period of drought stress, most of it will.

Q: Are the red berries on foxtail ferns poisonous?

A: For cats and dogs, yes. For humans, they only cause mild distress such as gastrointestinal problems. The sap of the plant may also cause skin irritation to people with sensitive skin.

A. Foxtail ferns tend to have problems in full sun conditions. They can begin to yellow and suffer sunburn easily. Partial shade conditions are best, especially if the only direct sun exposure is in the early morning. Avoid the blistering heat of the summer sun by planting your ferns in a location with full shade in the afternoon.