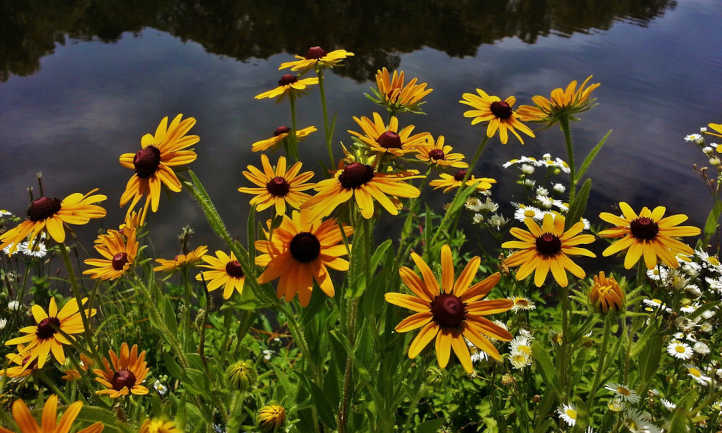 Wildflower fields full of black-eyed Susan are a sight to see in the late spring and summer in the American south. Akin to their sunflower relatives, Rudbeckia hirta thrive in similar conditions. Large open prairies that get full sun are great for them, but flower beds are also perfectly appropriate.

Anywhere you’d like to plant yellow flowers or native plants to attract beneficial insects is splendid for this stunning member of the Aster plant family. If yellow flowers aren’t your thing, there are plenty of daisy-like flowers of other colors in the Rudbeckia genus. You can grow a black-eyed Susans perennial plant and have cut flowers when it’s hot and when it’s temperate in fall.

So let’s talk about black-eyed Susan care, and discuss the varying kinds you can find with seed distributors and nurseries!

All About Black-Eyed Susans

Black-eyed Susans are botanically known as Rudbeckia hirta. There are tons of Rudbeckias out there, and we’ll cover those in the next section of this piece. While some are specific varieties of Rudbeckia hirta, there are others that are members of the same genus but are different species (i.e. coneflower). These plants are native to North America where they’ve been cultivated for hundreds of years.

Some are annual, and there are perennial varieties as well. Most have a golden yellow ray of petals that surround dark center cones. The differences between botanical structures vary only slightly between other Rudbeckias in the aster family. All of these sprout long stalks in spring from a rosette leaf formation that is either hairy or smooth and leathery. The leaves are either lanceolate or ovate with a deep center vein. The flowers often stay through fall in areas where the cold doesn’t set in until later. These native plants self-seed and return in spring, even in hot areas – a testament to their drought-resistant nature.

For those with pollinator gardens, Rudbeckia is a larval host to Lepidoptera moths. They also attract other pollinators, including bees and butterflies. The seed heads attract birds in fall and winter, and the stalks provide a habitat for boring insects too. Not only are they lovely in cottage gardens or pocket prairies, but they’re also excellent for the local ecology.

Here are some of the most common black-eyed Susan types out there. Not all are just golden yellow in color, either.

In the spring, wait for the soil temperature to reach at least 70° Fahrenheit for planting Rudbeckia, or 1 to 2 weeks after the last frost. These plants grow between 1-3 feet tall and can spread 12 to 18 inches. To encourage tighter and more compact growth, sow your seed close together to keep the plants from spreading out. To create a border row, spread seeds wider. Sprinkle the seeds across the prepared soil. Loosely cover with soil and water gently. You’ll see them emerge in spring and develop a yellow flower with black center in late spring to early summer.

Most black-eyed Susans like a full sun environment, although some varieties can also do well in partial shade. Plan for full sun as it tends to Susan’s flowers bloom best in full sun environments. It can handle the heat of a triple-digit summer, and a deep freeze at -30°. Black-eyed Suzies shouldn’t need any protection in these extremes. They’re hardiest in zones 4 through 9. In lower-numbered zones, black-eyed Susans are short-lived perennials or annuals.

While the black-eyed Susan can take some drought conditions, it really prefers regular watering. After all, it grows regularly along areas that trap water (river bottoms, the sides of roads, meadows, etc). But it doesn’t like standing water, so be sure your medium drains well! I can say from experience that consistently wet feet will kill a Rudbeckia plant, so your growing medium should be well-draining. Because they are prone to mildews, water their base with drip irrigation, soaker hoses, or a watering can in the morning. In their first year, keep the soil moist. After the first year of growth, new plants require little care in this regard, needing very little water to thrive even in the heat of summer. In winter, don’t water often to ensure the conditions are best for dormancy. Overall these plants are drought-tolerant.

Well-draining but moist media that has lots of organic matter is ideal for growing Rudbeckia. While it can tolerate many different soil types from clay to sandy and everything in between, the plant likes its roots to be able to breathe well while still having ready access to water. Black-eyed Susans prefer a pH of 6.8 to 7.2.

For the best black-eyed Susan care, don’t overfertilize. Overfertilization causes the flower stems to droop or become weak. If you’re going to fertilize at all, use a general-purpose slow-release granular fertilizer with a 12-6-6 NPK sparingly once or twice a year. Alternately, just amend around the plants with some rich compost. Many of the wilder rudbeckias don’t actually need fertilizer at all, but they do like extra organic matter.

Prune the first bright yellow flowers and seed heads off your lemon yellow or Gloriosa daisy plants to increase the bloom period of the flowers. This gives you more blooms or a second set in late summer. To prevent automatic self-seeding, deadhead spent blossoms. If you have a devoted bed for just those plants, allow them to reseed in the bed, but other species of plants and younger black-eyed Susans may get crowded out. Especially if you’re working with sage plants, like Russian sage, for instance, give coneflowers plenty of room for good air circulation. You may wonder, when do black-eyed Susans bloom? Most varieties bloom from June through September when you may often find yourself deadheading to help the plants bloom longer. Prune the stems back after they have finished flowering to try to encourage another flush of blossoms of Toto lemon in the late fall until the first frost date.

If you’ve separated out some root clusters, you can repot these quite easily. Ensure you have a good well-draining, organic matter-rich potting mix. Place the root cluster into the medium at the same height as the original plant was buried, and gently fill in under and around the root mass with more potting soil. Be sure that you have a larger pot than you absolutely need because the black-eyed Susan will spread to fill your container during the growing season.

There are two reliable modes of propagation for these lovely flowering plants. Seed can be sown directly or into pots (see the Planting section above). You can also propagate by dividing a plant in spring or fall, either before or after the flowers bloom. To divide and plant black-eyed Susan, scoop out the soil around the base of the plant, to establish how wide the root mass is. Dig 6 to 10 inches out from the base of the plant on all sides. Slide a trowel, transplanter, or shovel in underneath the root mass and remove it, being careful not to disturb the roots. Shake or dust off excess dirt. Gently tease apart the root mass, or cut it with a sterilized knife. Then plant 3 to 5 tuberous roots with each clump that contain both thick tubers and smaller roots. Divide your perennial plants every 3-5 years to keep them from becoming overcrowded.

Now that we’ve discussed black-eyed Susan care, let’s discuss some of the issues this short-lived perennial can face. This will help you grow a lovely black-eyed Susan flower on your plants every year.

Aphids suck sap from the plants in your garden and prevent those lovey blooms you look forward to. Offer prevention by spraying neem oil on all plant surfaces and deter aphids.

Neem oil also prevents the eggs of cabbage worms from hatching. Cabbage worms eat the leaves of your plants and prevent blooms as well. If you find you need something stronger, consider a pyrethrin spray. Pyrethrins are effective against both aphids and cabbage worms.

Butterflies and bees may also be susceptible to pyrethrins in the garden. Spray in the late afternoon or early evening, as cabbage moths become active at night and aphids are at rest at that time. That gives the pyrethrins time to dry on the plant before butterflies become active again.

Powdery mildew is a fungal disease that creates white patchy spots on the leaves of your plant. For this mildew, remove and destroy the affected flower, seed, and leaf parts of the plant, and then spray all plant surfaces thoroughly with neem oil to prevent further spread. If most of the plant is mildewed, you can spray neem oil every few days to try to wipe out the mildew, but this may or may not be effective. If treatment is not effective, remove the entire plant and destroy it.

Black-eyed Susan is also susceptible to leaf spot diseases in the garden. While the liquid copper fungicide mentioned above will help with some of the leaf spot issues, it doesn’t work on the most damaging leaf spot for its species. Septoria leaf spot is caused by the plant pathogen Septoria rudbeckiae, and it causes dark, almost black spotting to the leaves of your plant. To combat this particular leaf spot, you’ll need a fungicide that contains the active ingredient chlorothalonil.

Finally, rudbeckias are susceptible to verticillium wilt. This fungal pathogen is soil-borne, and there is no cure for this disease. Destroy any plants affected in your garden, and look into a fungicidal soil treatment to eliminate the pathogen before planting the seed in that area again. Do not sow seeds of an infected specimen in the garden either.

Q: Do black-eyed Susans come back every year?

A: Yes! Their heads have tons of seeds that germinate annually, and also feed birds.

A: They enjoy full sun.

A: Indeed. They spread via their heads that are full of seeds, and also via tuberous roots.

A: No, they are native, but they can be aggressive in the garden due to their vigorous seeds and roots.

Q: What do you do with black-eyed Susans at the end of the season?

A: You can remove the seeds from their heads to prevent re-seeding, or you can leave those and let them spread out. You can also divide them at this time.

Q: How do you winterize black-eyed Susans?

A: You don’t have to do anything in areas where winters aren’t consistently below -30°F. Otherwise, mulch them to keep them warm.

Q: Do black-eyed Susans need a lot of water?

A: In the first year of growth they need consistently moist media, but after that, they don’t need much at all.

Q: Why didn’t my black-eyed Susans come back?

A: Either the birds ate all your seeds, you picked too many flowers, or your plant was overwatered.

Q: Is it safe to grow black eyed susans around kids and pets?

A: It’s advisable to keep dogs, cats, and small children away! While it shouldn’t be fatal, it can cause gastrointestinal upset, resulting in stomach upset, diarrhea, and possibly nausea or vomiting if eaten. If your pets or children are likely to try to eat the flowers or leaves of your plants, this probably isn’t a good choice for your garden.

Q: Are there other uses for black-eyed susan?

A: There’s annual, biennial, and short-lived perennial black eyed susan varieties. Depending on which of the Rudbeckia varieties you opt to grow, some of the typically biennial types can be coaxed out into perennials with the right rudbeckia care. However, perennial varieties do not last for decades, having a relatively short average lifespan of five to seven years.