Skip to content
Epic Gardening is reader-supported. When you buy through links on our site, we may earn an affiliate commission. Learn more
Harvesting, Preserving, Vining Vegetables

How To Harvest Rhubarb Without Plant Damage 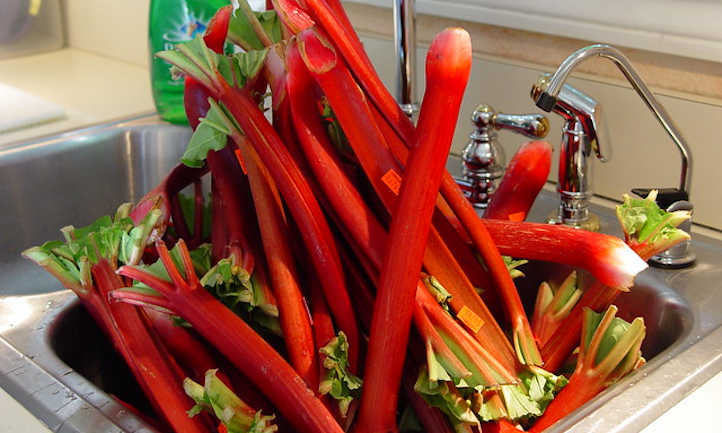 The word “rhubarb” comes from a Latin term, “rhababarum,” which means the root of the barbarians. The name originated back in the day when the Romans labeled anyone who ate the rhubarb as barbarians. That doesn’t stop us from feasting on this fruit today, and knowing how to harvest rhubarb is the first step!

In the culinary world today, rhubarb is generally used in desserts such as pies. Many recipes pair it up with other fruits to create complex, exquisite flavors. It is also used to make sauces, jams, compotes, and pie fillings. But beware! The leaves attached to the rhubarb are poisonous and loaded with a high amount of oxalic acid.

The flavorful produce is generally considered a vegetable, but in 1947, the court officially ruled it as a fruit in the US as that’s how it’s most often consumed. Considering growing and harvesting rhubarb in your vegetable garden? It will require some hard work on your end, but this unusual plant is worth your time and effort.

When Should I Harvest Rhubarb Plant?

Growing rhubarb can be a lot of fun, but you’ll need to be a little patient before you first harvest rhubarb. The stalks need to have reached their full length for the maximum value!

But how long are you looking at before you can start harvesting rhubarb? This depends on the variety, as some are faster to grow than others. But as a general rule, you’ll want your stalks to be at least 12 inches long in length for the smaller varieties, and up to 24” for the bigger ones.

If your rhubarb plant grows as a perennial in your garden, opt not to harvest for the first year to give the plant time to get established. If you’re growing it as an annual, all you have to do is wait for it to grow to the right size.

While most of the early spring will be taken up by growing time, from late spring through early summer you’ll be able to harvest regularly in a cut-and-come-again fashion. Picking your harvest by early July or mid-July will give you the best produce. The best time to do your harvest is in the morning, as the plant will be fully rested from the cool overnight temperatures and ready for harvest.

Pick stems that are at least the width of a finger. Smaller, pencil-sized stalks are too small yet and should be left to grow. If you seem to only get thin stalks in your garden, you may need to fertilize your plants to promote more growth. Add more compost or fertilizer and make sure that next year, you provide an early feeding to spur good development.

If you’re growing this lovely rhubarb plant as an annual, you can get one final harvest in the fall of all the remaining stalks on the plant at that time of year. Those who are growing the succulent stems as a perennial will want to let the plant conserve its energy in the fall months so it can survive the winter.

The color of your rhubarb really depends on its variety. While we all think of the stalk as having a dark red hue, not all varieties will produce that color. Go by the normal coloration of your variety rather than using its redness as a gauge for ripeness.

How To Harvest Rhubarb

It’s important to harvest rhubarb in a way that won’t damage your rhubarb plant. After all, you’ll want to keep collecting stalks regularly throughout the growing season!

Begin by inspecting your plant. You’ll notice that it grows much like celery does, with outer large stalks and an inner center core of multiple smaller stalks. Always leave those central stalks alone so the plant can recover from each harvest.

To harvest, slide your hand down the stalk to its base. Grasp it firmly at the bottom, then pull and twist. Usually, the stalk will come cleanly off in your hand. If it doesn’t easily release, use a clean and sharp knife to cut the stalks at the very base.

While it might seem appealing to cut through every stalk, it’s better not to. Cutting will leave an open wound at the base of the plant that may become infected with bacteria or fungal diseases. Breaking the stem cleanly away does not leave as much damage.

Avoid taking too many stalks at one time. No more than a third of the plant should be harvested, as it needs to have enough energy to come back! It’s better to harvest a few stalks each from multiple plants than to take too many from one.

Rhubarb leaves contain oxalic acid in high concentration and as a result these leaves are toxic and inedible. Once you pick rhubarb, remove the leaves and add them immediately to the compost pile. If you harvest rhubarb and leave the leaves intact, keeping those leaves full will cause the stems to decline and wilt more rapidly. The best time to remove them is the first time you have the stalk in your hand!

If done properly, you’ll be harvesting rhubarb for many years to come. Annually once early July rolls around, you’ll be surrounded by long, succulent stems, and every stalk will make the perfect addition to your future rhubarb pie!

How To Store Fresh Rhubarb Stalks

Now that you know how to harvest rhubarb, storing fresh rhubarb is easy. The best method for storing depends on when you plan on using the produce.

For short-term storage, there are two methods that you can use that are effective. In both cases, it’s best to store unwashed rhubarb and then wash it right before use.

The Jar Method: Remove the leaves from the stalks. Fill a glass jar almost halfway up with water. Place rhubarb stalks cut ends down in the water, and place in the refrigerator. Cover the top with a plastic bag. It will help retain adequate moisture and keep your rhubarb fresh. Change the water at least once a day. This method is ideal for storing fresh rhubarb for 2 to 4 days.

Aluminum Foil Wrap: Lay rhubarb stalks on a sheet of aluminum foil and fold the edge over the cut ends, then loosely roll it up. Do not seal the stalks completely in the foil, as it will make your rhubarb go bad faster. Place the wrapped rhubarb in the refrigerator in the crisper drawer.

Other Methods Of Storing Rhubarb

Want to store rhubarb for even longer? Freeze the stalks right after harvest!

To freeze your harvested rhubarb properly, rinse it with cold water and use paper towels to pat it dry. Chop it in smaller pieces and shift to an airtight container or freezer-safe plastic bag (don’t forget to remove excess air!). Label the container or bag and place it in the freezer. When stored correctly, frozen rhubarb can last for up to a year.

Drying is not an option for rhubarb. It’s best either fresh or frozen.

Q: When should you not pick rhubarb?

A: Stop picking rhubarb when the heat of the summer comes on. The stalks can become woody in the warmer weather of late July, and the plant needs to store energy to survive the winter months.

Q: How much rhubarb can you harvest at once?

A: To be sure your rhubarb plants will recover well, it’s best to take no more than ⅓ of each rhubarb plant at a time. Give the plants some time to recover and regrow afterwards.

A: Yes! Picking rhubarb stimulates the plant to regrow, as long as it’s in small quantities at any given time.