Skip to content
Epic Gardening is reader-supported. When you buy through links on our site, we may earn an affiliate commission. Learn more
Cacti & Succulents 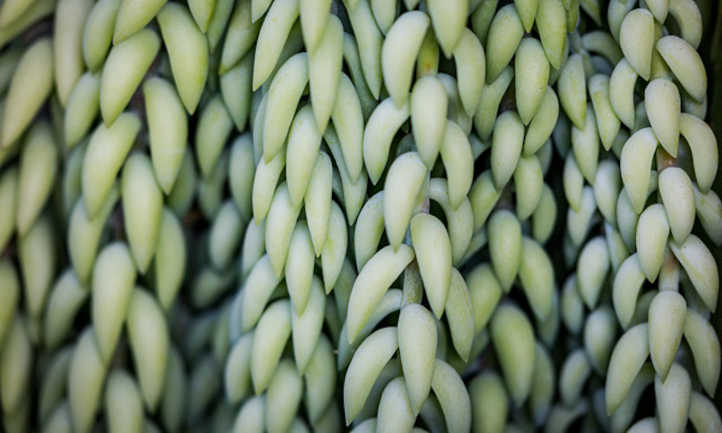 Lamb’s ear, cattail, gooseberry … we have a tendency to name plants after our furry friends. And if any plant is deserving of its name, it’s burros tail. This succulent’s long, trailing stems are packed with plump leaves, giving it the shape and visual texture of a donkey tail!

Aside from eye-catching detail, burro’s tail is prized for being both drought and a shade tolerant succulent. In warm climates, it thrives outside year-round. For cold areas, you can grow burro’s tail as an excellent houseplant. And, no matter what climate you live in, burro’s tail looks fantastic among other succulents and cacti.

In this article, we’ll learn all about burro’s tail care and what makes them tick. With some practice and patience, you’ll soon have a beautiful, thriving succulent!

All About Burro’s Tail

In the scientific world, burro’s tail is known as Sedum morganianum. Sedum is a popular genus of the Crassulaceae family, which contains most of the oh-so-trendy houseplant succulents. It’s usually recognized by long and leafy stems, but its 400+ species vary widely. Some sedum species were recently reclassified under the Hylotelephium genus, but Burro’s tail remains a true sedum.

Burro’s tail is sometimes called donkey’s tail or horse’s tail (any tail will do, really!). Perhaps the most common cultivar is S. morganianum ‘Burrito’. No matter the common names though, this succulent originates from southern Mexico. It’s used to warm temperatures and is at home sprawling across rock gardens.

Donkey’s tail is an evergreen perennial. Its trailing stems can grow up to 4 feet long and are densely packed with fleshy leaves. These leaves are pale blue-green or gray-green and spiral tightly around the stem. They’re coated with farina, an epicuticular wax that acts as a natural sunscreen and repels water to prevent rotting.

Succulent plants usually grow a flower stalk that shoots above the rest of the plant. Burro’s tail, however, keeps its flowers close to home. The inflorescences bud at the tip of a stem, capping it in bright pink or red blossoms. The flowers are star-shaped – a characteristic shared with most other sedums. Burro’s tail plants rarely flower when they grow indoors because they have to go dormant first.

We’re used to seeing plant dormancy in the winter, but that isn’t always the case with succulents. They don’t follow an internal clock. Rather, mature plants go dormant when the growing conditions become unfavorable. This often coincides with winter since the temperature drops. Sedum, however, usually goes dormant in the heat of the summer and grows through winter and spring (remember, it’s from balmy Mexico). In the coldest months though, it may take a quick dormancy before resuming its growing season.

If you like the texture of burro’s tail but want a little more color, take a look at the jelly beans plant! Both are in the Sedum genus, but jelly beans boast vivid pink tips. This fellow sedum is clumpier than burro’s tail, but still very similar.

Burro’s tail care is like most succulents, but with some important exceptions. Read up on how to care for these trailing succulents in order to keep your burro happy!

Place your succulent plant where it’ll get 4-6 hours of filtered sunlight each day. Avoid bright, full sun with this plant since brighter conditions can easily burn the leaves. Burro’s tail will grow in the shade as long as it gets some indirect light during the day.

Burro’s tail plants have a winter growing season, but that doesn’t mean they’re cold hardy. After all, they’re native to Mexico where temperatures are hardly below freezing. Their preferred temperature is around 70°F in summer and at least 40°F in the winter and spring. Any colder, and your donkey’s tail will likely go dormant or freeze. Gardeners living in USDA zones 9-11 should have no problem growing this versatile plant outside.

One of the most important parts of burro’s tail care is proper watering. It needs the ‘soak and dry’ method, which we use for most drought-tolerant succulents. Mimic desert rain by letting the soil dry out completely and then watering it liberally. You may even leave the soil dry for a few days before replenishing its moisture.

Water less during the summer when your plant is dormant (this likely won’t apply if you’re growing donkey’s tail indoors). All year round though, ensure that you’re only watering at the base of the plant. Getting the leaves and stems wet can quickly invite pests and diseases.

Also like a desert, we need sandy soil that’s very well-draining (pre-mixed cactus soil is perfect!). Water should run through it somewhat quickly without pooling on top. It’s also important that the pot you use has at least one good drainage hole.

Burro’s tail plant is fairly impartial to soil fertility, so it grows well in poor soil. It thrives in growing mediums that have a slightly acidic or neutral pH.

The burro’s tail succulent doesn’t ask for much (or anything!) when it comes to fertilizer. This step is completely optional. If you do decide to give your donkey’s tail plant a boost, fertilize lightly with a slow-release, balanced fertilizer at the beginning of the growing season.

We often think of succulents as small plants, because that’s how they’re sold in stores. But, most of them get quite large (in this case, up to 3 feet or more!). With that size and its densely-packed stems, burro’s tail is a heavy plant. If you’re going to grow it in a container, use a solid pot that can support this succulent beast. Take extra care in choosing a plant pot if you plan to use a hanging basket.

Even with the right pot, your burro’s tail may get a little rowdy. Using clean shears, clip back unwanted stems and set them aside for propagation. However, take care not to remove more than a third of the plant at a time. Keep the wounded stems as dry as possible until they heal.

Even if you grow it outdoors, you’re unlikely to get flowers from your donkey’s tail plant. So, we’ll have to rely on vegetative propagation instead (it’s faster than saving and planting seeds anyways).

Just like how you’d prune a stem, clip off a healthy section just below a leaf node. Gently remove all the individual leaves from the bottom third of the stem cuttings. Burro’s tail is a delicate plant, so you’ll most likely knock some extra leaves off in the process. As long as they broke off cleanly at the node, collect these and propagate them along with your stem cuttings!

Leave your cuttings out to dry for a few days. The cut portion will ‘callus’ over, which protects the interior from infection. While waiting, prepare a shallow container with well-drained soil.

Poke a hole in the soil with a pencil, then stick your burro’s tail cutting in the soil up to the leaves. Lay the leaf cuttings on top of the soil. Then, using a spray bottle, mist the soil and the leaf tips. Keep them consistently moist for a few weeks and you’ll soon see tiny roots and new green growth!

A great thing about growing the donkey’s tail as an indoor plant is that they don’t have very many issues. However, we’ll still keep an eye out for potential hiccups.

As we briefly mentioned, these succulent’s leaves fall off easily. Just brushing by it or moving its pot could end in a gap-toothed plant. This isn’t a sign of an unhealthy succulent though, just one that needs to be treated with care. When leaves fall off, clear them from the soil and use them for propagation. If you can, avoid transplanting your burro’s tail succulent.

Many other succulents turn red in bright light, thanks to carotenoid production (the same pigment that makes carrots orange!). Sadly, burro’s tail plants lack this protective pigment, making their blue-green hue susceptible to sunburn. If they get too much hot sunlight, the green stems and leaves lose their color and wrinkle up. If you notice this happening, immediately move your burro’s tail plant to some light shade. The damaged leaves are unlikely to recover, so you can prune them away for cosmetic purposes.

Lastly, all succulent growers should be wary of overwatering (especially indoors). Even a little excess water can risk root, stem, and leaf rotting. If you’re ever unsure if your succulent needs water, don’t water it! If your burro’s tail does get too much moisture, wait for the soil to dry and then wait a week or more before watering again. You should also ensure that the container has a good drainage hole.

Lucky for you, burro’s tail plants don’t attract many pests. If you are to find some though, they’ll probably be aphids. These tiny buggers will suck the sap from your plants, leaving them discolored and weak. A large enough infestation will eventually kill your succulent.

The best thing you can do is prevent aphids from showing up at all. Do this by keeping the soil surface clear and pruning any dead or diseased plant material. Keep your burro’s tail succulent somewhere with good air circulation so there isn’t excess moisture between the leaves. If they just can’t be prevented, treat aphids with neem oil, insecticidal soap, or diatomaceous earth.

Root rot is a monster to succulents. When too much water drowns the roots, rot settles in and consumes the plant. Previously healthy growth will turn mushy and black, with little chance of recovery. If confronted early on though, you can save the rest of the plant. As soon as you notice rot, uproot your burro’s tail plant and cut away all the rotted roots, stems, and leaves. Provided this doesn’t take out all the roots, you can then replant the succulent in fresh soil. Though it’s usually caused by overwatering in succulent plants, rot sometimes comes from a ground fungus. You should always discard the old soil and wash the container. In-ground plants should be moved elsewhere.

Q: How often do you water burro’s tail?

A: If you’re using a well-drained container and soil indoors, you’ll only need to water every 2-3 weeks for efficient burro’s tail care.

A: No, donkey’s tail plant isn’t toxic to dogs, cats, or humans.

Q: How much sun does a burro’s tail need?

A: Burro’s tail care requires 4-6 hours of filtered sunlight every day (avoid bright, full sun with this plant, even if indoors).

Q: Why is my donkey tail shriveling?

A: If the leaves are mushy and shriveled, your plant is likely overwatered. If the plant is losing its color, it may be sunburned and need less bright light (indirect light is just enough sunlight for this succulent).