Skip to content
Epic Gardening is reader-supported. When you buy through links on our site, we may earn an affiliate commission. Learn more
Grains, Vegetables

When To Harvest Corn For Perfect Ears 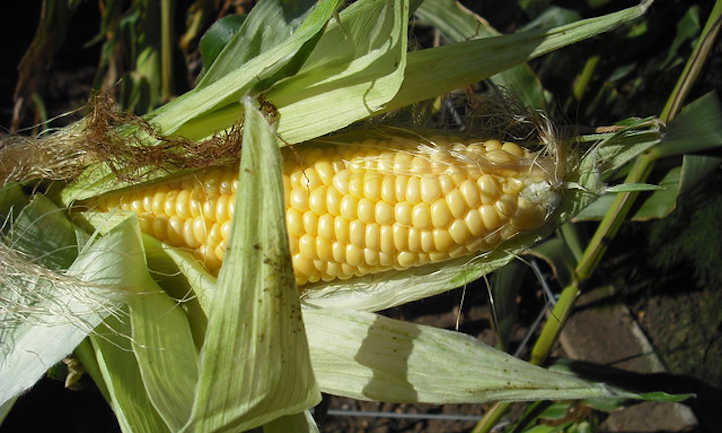 A delicious summer staple, corn is the backbone of so much of what we eat in the United States. Whether it’s eaten as fresh sweet corn or dried to make cornbread or tortillas, we rely so much on this wonderful plant. But getting the timing right on when to harvest corn can be a little tricky. With its kernels hidden from view, how can we tell when our corn is ready to harvest and time to enjoy the sweet fruits of our labor?

Corn is a grass, believe it or not! When it first germinates in the garden, it shoots up out of the earth with a single little blade of grass-looking matter. Over time it will shoot out more leaves and push upwards, eventually forming nodes and growing ears of corn. Getting the timing right on when to pick corn requires a little planning ahead.

This crop goes from seed to ear of corn in under 100 days. A common phrase used among people who grow fresh corn in their garden is ‘knee-high by the 4th of July’. That means that the seeds have been planted, germinate and reach about 12-18” high by early July. By no means do you have to follow that rule, but you should take a look at the date of the first frost in your region and count backward to figure out your own planting date. You want to make sure that your corn is ready before a killing frost in the fall undoes all the plants’ hard work.

Corn on the cob isn’t the only way to eat the bounty of your corn stalks. There is also corn for popcorn, animal feed, flour, cornmeal, and tortillas. Knowing what type of corn you’re trying to grow is crucial to keep your corn sweet when it lands on your plate.

Unlike when you pick an ear in the home garden, mechanical combines are used to harvest fields of dry corn for animal feed. This is because there are certain types of corn like flint, popcorn, or flour corn that are only picked when they’ve thoroughly dried. This is completely different for sweet corn.

Sweet corn has a relatively short shelf life. Immediately after harvest, the sweet sugars in the kernels start turning into starches and thus decrease in sweetness. This is why it’s such a popular food to grow with home gardeners. The quality of homegrown sweet corn that’s harvested in the morning from the garden and eaten for lunch is unsurpassed by anything you’ll find on a grocery store shelf, you can taste the sugar in every kernel!

How To Identify If Corn’s Getting Close

For growers who start their corn in early to late spring, you can expect your corn to be ready for harvest in mid to late summer. Corn takes anywhere from 70-100 days to grow from seed depending on the variety. So, as soon as the chance of frost is gone, and the daily temperature reaches around 65 degrees Fahrenheit, you can go ahead and start planting your corn kernels.

In order to gauge when to harvest your corn, watch its growth habit. A single corn plant will put out several ears of corn, with the most mature always at the top of the stalk. The corn cobs will start out tiny, and with each passing week swell up in size. Search for the long, semi-transparent white threads called silks that emerge from the top of the ear and sway in the breeze. If you’ve sown your corn close enough, the silks will become pollinated by the pollen from the tassels at the top of the stalks and each kernel of corn attached to each of the silks will plump up and become the kernel of corn you’re accustomed to seeing.

Be careful not to harvest too soon. If the cobs at the top of the plant are not yet ready, the rest of the cobs aren’t either. Let your corn fully develop in order to get a better flavor.

There are several different types of corn and they are usually put into different categories based on what they’re used for. What type do you want to grow?

While we have a separate article that goes into depth on the types of corn and how they’re used, let’s do a quick summary:

Sweet Corn (Z. mays var. saccharata or Z. mays var. rugosa): The corn that’s grown for corn on the cob and eaten fresh. Picked while fresh with a milk like substance that oozes from the kernels when ripe; immediately after the silk turns brown.

Dent Corn (Zea mays var. indentata): The corn that’s used to make homemade corn tortillas. This is also known as field corn and can also be used to feed animals.

Flint Corn (Z. mays var. indurata): This is sometimes called Indian Corn, it comes in a range of colors and can be used as cornmeal or animal feed.

Once your ears plump up, watch the colors of the silks. You need to wait until they turn brown before you can harvest. Once this sign appears, you can test for readiness by gently pulling back some of the husks and pressing your fingernail into one of the kernels. The husks act as a cover for the baby kernels and might be a little difficult to peel back. That’s alright! Give it a good tug and it’ll peel back. If there is still liquid inside the kernel, and it oozes out a milky starch-like substance, it’s ready to harvest. If it oozes a more watery substance, it’s not yet ready. One of the most satisfying tasks in gardening is being able to pick an ear of fresh corn right off the plant.

There may be some corn cobs that don’t quite plump up all the way. These cobs usually have a few rows of kernels near the top of the cob that haven’t quite filled out. These can be picked anyways, this is a result of under-pollination and at this stage cannot be corrected.

For hard varieties of corn, you’ll want to wait to pull your corn cobs off until the husk has turned a yellow-brown color and the plants appear to be almost dead. At this point, you’ll want to harvest the entire crop in one go and be able to process the ears fairly quickly. It is essential that the kernels are completely dry or else the kernels can degrade in quality if picked too soon.

How To Harvest Corn

Harvesting corn is one of the easiest things to do in gardening! It’s also one of the most satisfying as well. Once you’re ready to harvest sweet corn, simply take your ear of corn, and bend it downwards and away from the stalk. It should snap right off! Be careful that you don’t damage the stalk, there might be a few more ears ready to pick in a week’s time. Once you’ve pulled a few ears off, you’ll quickly get the hang of it!

If you’re growing hard corns like popcorn, be sure to leave your ears in the field to dry for 4-6 weeks past when the green disappears from the husks. Gardeners may find it hard to wait, but your patience will be rewarded with a healthier and plumper seed!

Once your hard corn has dried out, remove the dark husk and with your thumb push against the hardened kernels in order to remove them. With some varieties of corn, you can even rub the cobs against one another to quicken the process.

How To Store Corn

Corn quickly loses its sugars once it’s been picked. For this reason, try and eat it or process it as soon as it’s been picked. If you can’t get to it right away, you can store it in the refrigerator unwashed for a few days.

If you’re growing corn to preserve it and enjoy it throughout the year, try to blanch your corn cobs right after picking. Just add the shucked ears to a pot of boiling water and quickly remove it after four minutes of processing. Dunk it into ice water to stop the cooking process and then cut off the kernels with a knife. At this point, you can either freeze it or can it.

If you’re drying your corn, wait until the husks are dry and papery and the corn kernels are hard to the touch. Pick an ear and test to see if the kernels pop away easily. This is best stored as kernels in glass jars or sealed containers. Dry canning is a great option to preserve freshness! Dry corn is susceptible to insect damage, so bear that in mind when it comes to storage.

Q: How many times can you harvest corn in a year?

A: In most areas of the US, you can only harvest corn once in the season if your corn is planted all at once. However, if you plant succession crops, starting fresh seeds every week or every few weeks, you can get several harvests in a single year depending on your climate.

Q: Does corn grow back after you pick it?

A: No. A stalk of corn will put out just a few corn ears. Picking it will not encourage any further ear production.