Skip to content
Epic Gardening is reader-supported. When you buy through links on our site, we may earn an affiliate commission. Learn more
Indoor Grow Lights, Product Reviews

Mars Hydro Review: How Do These Lights Perform?

LED grow lights are a tough thing to understand – there are hundreds of companies selling through different brand names, making outlandish claims, and so on…

What’s a grower to do?

Today, I’m reviewing one of the most accessible options in the industry. I’m talking about MarsHydro, a Chinese company whose very affordable LED grow lights have slowly gained acceptance among growers. As a Chinese manufacturer of lights, you still have to bridge the America-China gap in communication with the company sometimes, but they are coming a long way. And better yet, they offer truly low-cost grow lights.

In this in-depth MarsHydro review, I’m going to take a look at their product line, build quality, and the company itself review from top to bottom. We’ll look at:

…and much more. Without further ado — let’s dive in to Mars Hydro.

My Quick Take on MarsHydro

If you want my quick opinion, here you go:

Mars Hydro’s grow lights are quite affordable relative to their quality, especially the new version of the Mars Hydro 300W. It uses new SMD technology and they’re able to be daisy-chained. They perform much better than older versions, which has a bigger problem with burnt diodes. It’s a great choice for a beginner grower.

It’s an affordable light that will suffice for most hobby gardens and low-cost gardens. All of their offerings are available through eBay, Amazon, or their official website.

Their current lights are split into these categories:

There are too many models to individually cover in this review, so I’ve decided to cover the Pro II and Reflector Series, which are their most popular lines. 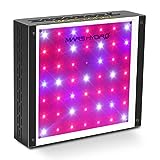 The only Mars Hydro light I personally can recommend is the 300w Full Spectrum, as it’s the one that I’ve used in my personal grow room.

The newer version has more red diodes to achieve bigger flowers, larger fruit, and higher yields. It’s got an upgraded power switch, plus you can finally daisy-chain them to allow more scalability to your grow room.

If you’re interested in getting one of their grow lights, I’d recommend you purchase through a third party like Amazon to make sure you get your money back if you get a dead light or have any build quality issues.

Should You Buy a Mars Hydro Light?

If you’re interested in the MarsHydro 300W, then yes…it’s still a good value. They’re coming out with some higher-end white LED models, which I am going to get my hands on soon for an in-depth review both here on the blog and my YouTube channel.

When I was looking up all I could find about Mars Hydro I noticed that they had very little information about themselves in their website. So I wrote them an email expressing my concerns over their lack of information asking them for more, and they answered!

Here are some parts of their answer:

We are a real company in China, with a 10 year history since 2009. With a professional research, development, production, and sales team on our LED grow lights, grow tents, and related accessories, we strive for continuous technology innovation. Our main goal is to let more and more budget customers get a high-quality LED light.

Our factory is located in Shenzhen, China and we have 5 overseas warehouses (USA, Canada, UK, Germany, and Australia). Products are shipped fast from a local warehouse.

The only problem is we are not native English speakers, so we use nicknames which is normal in international trade.

It’s important to remember that there’s a cultural divide between how business is conducted in America and in China, so the practices of a Chinese company may seem strange to us as Americans, but it’s simply a culture gap most of the time…not anything malicious or unprofessional.

What Type of LEDs Do They Use?

Marshydro utilizes mostly Epistar LED chips, but in some of their higher quality models they also utilize Cree  or Osram LED chips.

Here’s some information about their spectrums according to their product description.

White LEDs in the ranges of:

Mars Hydro provides a 3 year true warranty. Whenever you buy a LED grow light, it’s important to check the warranty that the company offers. I can’t tell you how many times I hear about people buying lights and then the light dies on them in the first month of operation. To protect against that, the better companies offer a warranty that covers any initial light failures. The best companies offer even more protection than that. The quality of a light manufacturer’s warranty is a direct signal as to how much they believe in the product that they’re making and selling to you.

Mars has improved their warranty page since the initial draft of this review, adding more information as well as including a full return policy and replacement parts cost sheet.

The Reflector Series is Mars Hydro’s most affordable grow light line up. Starting at $91.99 USD, they’re designed around using integrated reflectors, and 5W Diodes. They have changed their naming strategy for the better in this series, stating the actual number of LEDs rather than the theoretical maximum output.

Last but not least we have MarsHydro’s offering of a mainly CREE powered COB LED Light that comes in an IP65 enclosure which offers water protection. It is powered by a Meanwell driver which is actually very high quality, and a combination of a CREE CXB 3590 COB, with their more usual Epistar red and blue diodes around the COB. To ensure the longevity of the COB they cool the grow light actively with a radiator and a fan.