If you’re lucky enough to have a large yard or garden, you’ll probably need a fertilizer spreader to take some work off of your plate.

Also known as lawn or seed spreaders, these handy tools make seeding or fertilizing your yard an absolute breeze…but choosing one can be a pain.

There three different types of fertilizer spreaders, each of which are best suited for a particular application or yard size. On top of that, there are a bunch of brands that seem to offer the same product…but the products vary widely in quality.

In this this buyer’s guide, we’ll take a look at lawn spreaders in detail: what they are, the different types, how to choose one, and tips for calibration and use.

We also recommend the best fertilizer spreaders for your situation. Here’s our cheat sheet in case you’re in a hurry!

What Is a Fertilizer Spreader?

Before we get into the weeds (pun intended) about spreaders, let’s understand how they work. The basic idea is easy to understand: they’re a garden tool that helps you take a uniform material like fertilizer or seed and disperse it over a large area.

They make it easy to control the exact amount of seed or fertilizer so you don’t under or over-apply to an area. On top of that, they’re a massive time-saver compared to doing the same work by hand.

There are four different types of spreaders overall, but they fall into two major categories: drop spreaders vs. broadcast spreaders. Which you choose depends on a few factors, including the size of your yard and the type of application that you need to do. Let’s take a look at both types in detail.

Also known as rotary spreaders, these are the most common type of lawn spreader. They’re perfect for larger areas (up to and over an acre of space). A typical broadcast spreader will spray about 3-4’, making your job easy.

The idea behind this type of spreader is simple: there’s a hopper at the top that feeds the material to a horizontal spinning disk below. On the disk, there are fins that disperse material as it drops from the hopper. Fancier broadcast spreaders will include the ability to adjust the direction and distance of the spread.

Drop spreaders are true to their name. They usually have a larger hopper than a broadcast spreader, and drop material directly below the hopper. This makes them good for precision application of seeds or fertilizer. You can push them directly over a specific area, like a row garden or strip of dead lawn, and not worry about throwing material all over the place.

Drop spreaders are great for “spot fixing” areas of your yard or lawn, especially if you have dead patches.

Hand held fertilizer spreaders are by far the easiest to use and the most lightweight. All you need to do is toss some material in the hopper and then turn a crank to disperse your seed or fertilizer.

However, what they have in portability and ease of use, they lack in capacity and precision. The hoppers don’t hold much material, and they don’t spread too far compared to more robust broadcast spreaders. They’re also less precise than a well-calibrated drop spreader. These spreaders are the heavy-duty, top of the line versions of smaller broadcast spreaders. Also known as a tow behind fertilizer spreader, they can be attached to a tractor or ATV. They generally use the wheels to power gears that turn the horizontal spreader disk.

If you need a heavy-duty spreader for a very large space, using a pull behind fertilizer spreader is a must. They’re better made, have a larger hopper capacity, and their spread distance is much further than smaller models. However, you do have to pay for that privilege — but the cost is well worth it.

Now that we have an understanding of the different varieties of spreaders available, it’s time to look at what makes one spreader better than another. There are a few factors you should consider aside from type: your budget, the durability, the size of your lawn, and the materials used to construct the spreader.

Size of Your Lawn

Both the size of your yard and its shape will affect the type of spreader you should buy. If you have a large, uniform lawn, a drop spreader is probably the best choice. This is because it’s more precise, allowing you to run it over your yard much the same way you’d mow the lawn.

For a smaller garden area or strip of lawn, a handheld broadcast spreader is probably a better choice. You’ll save money on the purchase and it’ll be portable and easy to use for the small space.

If you have a very large space to cover — over an acre or so — consider a larger broadcast spreader or even a pull-behind broadcast spreader. The spread distance is large enough to cover a significant percentage of the yard with one pass, making your fertilizing or seeding work as efficient as possible.

In general, fertilizer spreaders are pretty cheap. You can get a good one for around fifty bucks, but there are a few higher-priced models out there. These high-end spreaders will be made out of better materials, last longer, have a larger capacity, and have extra features like spread adjustment.

As long as you take care of your seed spreader, you’ll be able to use it for years. If it’s made of plastic, it should be stored away from the sun to prevent premature breakdown and brittleness. If you’re using corrosive fertilizers, then you should consider a spreader with a stainless steel hopper so it holds up to the abuse.

When it comes to build quality, what matters most is the material used in the hopper. Higher-end hoppers are made of stainless steel, making them very precise in how they feed the dispersion disk or dropper.

Lower-end spreaders will have a plastic hopper which will vary in quality. You might think you should always buy a spreader with a metal hopper, but one advantage that plastic has is durability. It’s immune to the corrosive effects of some of the more extreme fertilizers out there, so if you’re using it constantly you may actually want to pick a plastic hopper.

How to Use a Fertilizer Spreader

It’s not useful to have a fertilizer spreader and not know how to use it, is it!? These suggestions will help you get the most out of your purchase. Pay particular attention to the calibration section, as it’ll make the biggest difference in how much square footage you can fertilize and how densely you fertilize.

First of all, read through the instruction manual when you get your spreader. It’ll contain most of the info you need to know, including the all-important spreader settings and calibration instructions.

Here are a few more tips that your instruction manual may not cover:

Tip on How to Use a Broadcast Spreader

Because broadcast spreaders are a bit more haphazard than a drop spreader, try fertilizing or seeding in a criss-cross. If you do this, be sure to turn the settings down to half for each application, otherwise you’ll over fertilize and kill your yard!

By making two passes, you’ll get a more even spread while applying the same amount of fertilizer overall.

One of the most important things to do when you get your spreader is to calibrate it properly. They work by throwing little granules of fertilizer, seeds, or pesticides out into your yard. If you don’t control how fast that material comes out, you’ll either over or under apply and have disastrous results.

First, read through the instruction manual to see if the manufacturer included any recommended calibration settings. If so, always follow those to start and see how they perform. If they work, then stick with them…but don’t expect them to. It’s best to think of the recommended settings as a starting point to work from You should also recalibrate your spreader any time you change to a different type of material, because the sizing of the granules won’t be the same.

Now that we have an understanding of the different types of spreaders available as well as what to consider when making a purchase, here are our recommendations for the best spreaders in each category. 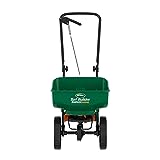 This is a smaller version of a broadcast spreader that’s a perfect choice for almost everyone who has an average-sized yard. It comes fully assembled and has a settings dial on the back, making it a great choice as a precision broadcast spreader.

Perhaps the most interesting feature here is that it has EdgeGuard technology, which is just a fancy word for blocking off one side of the broadcast so you don’t throw fertilizer or seeds into your driveway. You can run it against the edge of your yard without worrying about creating a total mess or fertilizing an area that doesn’t need it!

The Wizz Spreader from Scotts is a fantastic choice for smaller yards. It’s cheap, lightweight (2.4lbs), and still holds enough material in the hopper to fertilize 2,500 sq. ft. That’s more than enough for the average backyard.

It’s a good choice if you want portability and ease of use, but it’s a bit more labor intensive than other spreaders and also has a hard time dealing with any material that’s been wetted down.

Yet another recommendation for a Scotts product! What can we say, they make quality gardening tools. This is an efficient precision drop spreader that will make your fertilizing job a breeze. Unlike our next recommendation, it comes fully assembled so you can use it right out of the box.

If you have a large, uniform area to fertilize or seed, you should consider this drop spreader. It’s got a 10,000 sq. ft. capacity and the drop mechanism ensures you won’t throw fertilizer all over the place. 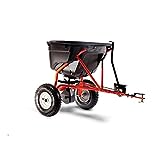 For the largest yards, you can’t go wrong with this tow-behind broadcast spreader from Agri-Fab. It’s got enough capacity to cover ½ an acre at a time, meaning you won’t have to constantly refill it to get the job done.

You’ll have to assemble it yourself once you receive it, but it doesn’t take long at all.

Our final recommendation is a solid choice for those who want a mix of ease of use, broadcast, and a larger capacity spreader. The Earthway will cover around 10,000 sq. ft., all while being easy to both fill and use.

The rubber tires and the cylindrical drum make it stable to use even on rougher terrain. It comes with a screen to help break up clumps of material before it hits the spreader disk.