Aquafarm Review: Is It Worth The Money? 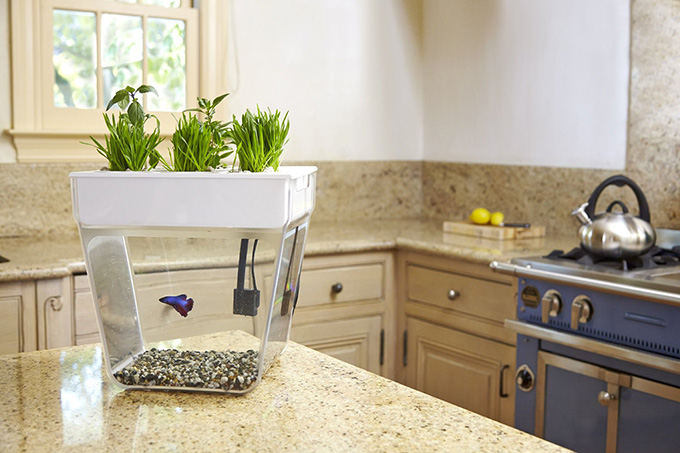 We’ve got an Aquafarm to take a look at today on the blog.  It’s a pretty cool countertop aquaponics system that was first brought to life via Kickstarter by the same guys who do the Mushroom Kit that I’ve also reviewed here on the blog.

​The Aquafarm, also called the Back To The Roots Water Garden, is designed to be a mini-aquaponics system. It’s a great introduction to the growing method for the total novice.  That’s a hard task to undertake because aquaponics is arguably the most complex form of soil-less cultivation that’s out there right now.  You’re dealing with plants, fish, and the nutrient cycling between them, which is a lot more complex than simply feeding plants in soil or hydroponics.

There’s been a lot of skepticism about how well this product will work in aquaponics circles, and I don’t disagree that if you’re REALLY into aquaponics, this probably isn’t the system for you.

But it was never intended to be.

What The AquaFarm Comes With

When I opened up the box, I was surprised about all of the stuff that came inside.  It looks like Back to the Roots has partnered with a lot of different companies to get all of the materials for the kit.

They use a company called Home Grown Ponics for all of the dechlorinating, fish prep, beneficial bacteria, and tank cleaner.  For the seeds, they partnered with Seeds of Change, an amazing and upstanding seed company that I fully support.

How Well Does It Work?

I didn’t expect it to be a high yield, extremely efficient system, so it went just about as well as I expected. I went with wheatgrass and lettuce and they grew like weeds.  Wheatgrass, in particular, requires little nutrition to thrive, so this system is perfectly suited to grow it.

The lettuce took a bit longer. If I was growing this in one of my hydroponic systems, I could get it to harvest in about a month from the seedling stage. With the AquaFarm, it’s looking like that might be around 2 months or so – similar to soil. But remember, it’s not a perfectly optimized system. We’re relying on fish for nutrition and not perfectly balanced organic nutrients like in hydroponics.​

As you can see, there aren’t any obvious nutrient deficiencies going on. It looks like it just needs a little bit more time and potentially more light as the seedlings look like they’re stretching a bit.

I could have supplemented with some lighting but decided not to just to see how this would work in a ‘normal’ situation.​

I ended up not planting the basil that came with this system because it tends to germinate extremely slow and grow slowly as well.  I wanted to plant something that was a bit easier and quicker to grow in this experiment.

Now, let’s take a look at the roots:

Nothing too surprising here. These aren’t perfect roots, but they’re healthy. There’s definitely a little bit of algae buildup on some of these that could be avoided with a less translucent cover and cooler water temperatures.

One of the issues I suspected I would run into with the AquaFarm would be keeping it clean. I’m used to hydroponic systems where the nutrient reservoir is covered and protected from light, which is the exact opposite of how the AquaFarm works. After all, you want to be able to look at your fish, right?

The issue with nutrient-rich water being exposed to light is that it’s a breeding ground for algae.  You can’t treat the water with anything that would harm a fish, so you’ll run into algae more often than you’d like.

What I ended up doing was adding sea snails into the mix. They ended up converting the algae into more waste, meaning I got a cleaner tank and more nutrients for my plants above.

They can’t get into the water pump and air hose though, and those two parts of the system get dirty pretty quickly. I’m not sure how to clean this without manually doing it every week, but it also doesn’t seem like it will be a huge deal.

Update: The v2 of the AquaFarm has improved this – it’s no longer a clear tube, it’s a black tube that prevents algae from growing on the inside of the tube.​

The Aquafarm is a reasonable price for what it is, especially if you enjoy watching your fish.  I think it’s a definite buy if you have any interest in gardening or aquaponics.  It’s also a great gift for a garden lover.

No, you’re not going to be growing your daily supply of greens and herbs off of this thing, but you will definitely have enough produce to use from time to time, and a nice conversation starter that’s attractive to look at.

You don’t need to do any pH balancing or nutrient adjusting like you would in a normal hydroponics system – just feed the fish, make sure the water level is topped off, and monitor the plants…that’s it.

It looks like one little betta fish is enough to support five plants, even if it’s not 100% optimized nutrition for those plants.

I filmed a bunch of updates as I progressed with the system on my YouTube channel (which you should subscribe to!).  You’re welcome to see how things progressed here: