Skip to content
Epic Gardening is reader-supported. When you buy through links on our site, we may earn an affiliate commission. Learn more
Microgreens

Building a Microgreens Business – The Beginning 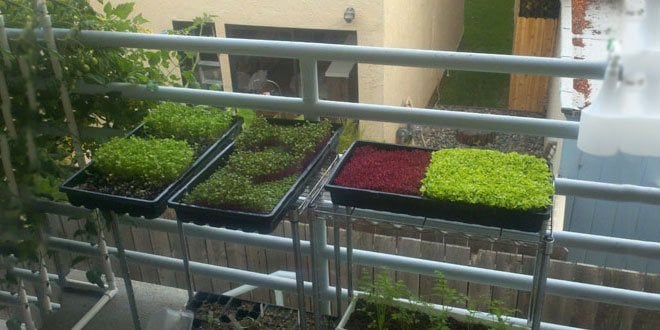 I’ve been experimenting with gardening techniques for about two years now. I started back in 2010 with my brother and Square Foot Gardening, a super-easy method of gardening at home. Funnily enough, I now also work for the author and his non-profit foundation.

After SFG, I got into hydroponics and soil-free gardening. This was (and is) a great hobby of mine and only led me further down the rabbit hole of affordable gardening you can do at home. I’m very health conscious so I like to dream up ways to supply food for myself.

In looking for newer and more unique ways to grow food at home, I stumbled upon microgreens. I asked the members of r/hydro, a gardening community I created, if they would be interested in growing any as an experiment with me. Some were, and the orders for seeds, trays, and soil were placed.

I’ll admit that I had the idea of selling these to restaurants before I even ordered my kit – but like many of my business ideas it was only a small idea in my mind. I was primarily interested in growing them for fun and for food, but it turned out to be much more than that. Little did I know I would be starting a fully-operational microgreens business!​

I ordered a seed kit with a bunch of different varieties and chose four to plant: Red Amaranth, Red Cabbage, Kogane, and Purple Basil. I chose coconut coir to grow in and used 10×20 trays. Other than that, I added nothing besides fresh, properly pHed water. After a few days the seeds had sprouted and were looking absolutely gorgeous.​

I taste-tested all of my greens then immediately decided that instead of eating them, I wanted to sell them. Fortunately, I live about three miles below an affluent area of town with a lot of great restaurants. I already worked with a client up there for my other business, so I had a good idea of the restaurants in the area.​

Putting On My Pitching Persona

Now I had pitched clients in the past but I was very unfamiliar with how to deal with restaurants, chefs, and produce. This was my very first time ever doing something like this, so I was definitely a little nervous. Here’s what I did to prepare:

After I’d prepared myself, I had to prepare the greens. We put about an ounce of each green into clear bowls, adding ice and a 10×20 tray to carry them in. While this looked nice, in retrospect it was really cumbersome and hard to hold because the 10×20 trays are pretty flimsy.​

We parked on one end of a long street with great restaurants lining both sides. We made sure to do this from 2-4pm, when restaurants are usually dead. Both of us were a bit nervous to get started, so we decided to approach some restaurants that were probably unlikely to say yes – higher-end chains, pizza places, etc. As predicted they said no, but the benefit was that it gave me a chance to refine my pitch.

As we moved along down the street, confidence grew and so did responses from restaurants. I had no business cards, no sell sheet…nothing but the greens. I left my information with a sushi restaurant that seemed interested as well as a couple of other places…but no one had committed to purchasing yet.​

The last restaurant that we were targeting that day was by far the most prestigious on the street and arguably is one of the better restaurants of its type in the city/state. Needless to say, the pressure was on. Both of us walked in and confidently told the girl at the front that we were here to see the chef and we grew microgreens. After a confused look, she walked to the back and grabbed two of the sous chefs. They came out, chatted with us, and tried the product.

As luck would have it, this restaurant was one of the most local-focused and also already used microgreens in their cooking, though they were getting them from another supplier. I pressed them a little bit about what they didn’t like about their other supplier. They said that it was more expensive, less fresh, and sometimes was packed down far too much, so only the middle of the package was actually usable.

These were great competitor discovery facts that I could use to market my next restaurant.

Lesson Learned: If a customer comments about a competitor, poke around and figure out what they do and don’t like about that competitor to gain valuable market knowledge.

The chefs really liked my product and put in a large order for delivery in 10 days. I told them that I could grow anything that they wanted and bring it in, despite not having the seeds. I had to two day air them in and pay MORE in shipping than the seeds were worth just to make good on my promise.

In the end, I had to make it happen, regardless of my situation.

If you CAN get it done, even if it’s not convenient, do it. Under promise and over-deliver.

From Idea to Business in 10 Days

The biggest thing I learned from this part of the story is that it does not hurt to market-test your idea ASAP. Yes, my situation is a bit easier to test than a SaaS app or a retail store, but there are ways to do it. Validate early and validate often. I was fortunate enough to get validation from one of the best restaurants in San Diego on the very first day…but it wouldn’t have happened unless I got out there and tested my idea

If you enjoyed this first post, please let me know! I want to do a better and better job of documenting the process for everyone, so please leave a comment, ask questions, and make suggestions for future posts. Thanks!​