Free $100 gift card with any purchase over $500 until 11/28
Skip to content
Epic Gardening is reader-supported. When you buy through links on our site, we may earn an affiliate commission. Learn more
Product Reviews

Whether you’re planning for spring or just getting a head start on your gardening tasks in general, starting seeds can be one of the trickiest parts of being a gardener.

If you’re used to buying seedlings from your local nursery and haven’t started seeds before, it can be daunting to figure out exactly what type of seed starting mix is best.

In this article, I’ll get into exactly what you need to know when choosing the best seed starting mix for your garden and seedlings.

If you just want my top recommendations, check them out below. 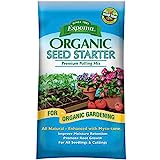 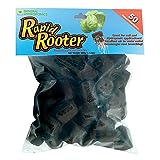 Other Good Options From Amazon:

What is Seed Starting Mix?

Although the name sounds fancy, a seed starting mix is simply a specific mixture of soil that is designed to give seeds their best chance at germinating and growing into healthy young seedlings.

Seed mixes are typically finer and lighter than typical garden potting soil, making them easier for young roots to navigate.

What is a Soilless Seed Starting Mix?

When I first started gardening, I was confused by soilless seed mixes. How could a plant grow without soil?

Soilless mixes like coconut coir or peat moss can be a good option if you want to be 100% sure that there are no contaminants or pathogens in your seed starting mix. Unless your mix has been sterilized, you can’t be totally sure that it is free of pathogens.

Should You Get Sterilized Seed Mix?

When buying seed starting mix, you’ll often see the word “sterilized” on the package. This means that the manufacturer of the mix has heated the soil past the point of survival for many bacteria and harmful pathogens.

While it’s not necessary to get a sterilized mix, it’s highly recommended. Mold and fungal issues can destroy delicate seedlings. This is an especially sensitive issue if you’re growing microgreens, which are only grown to the seedling stage.

How is Potting Mix Different From Seed Starting Mix?

You’ve probably heard of potting mix before — it’s a staple for flowers, veggies, raised beds…basically any type of gardening.

But is it good for starting seeds?

In general, not really. Here are the general characteristics of potting soil:

Here are the general characteristics of a good seed starting mix:

You might think that not containing any fertilizer would be a point against seed starting mix, but seeds contain most of the nutrition they’ll need for the first few days of growth.

Once your seedlings get to the point of growing their first set of true leaves, all you need to do is transplant them into a potting mix with more nutrients in it and they should thrive.

Now that you know why seed starting mix is used instead of other types of soil, let’s get into what makes a seedling mix perfect for your plants.

The best seedling mixes are lightweight but still retain water well. They’ll include either vermiculite or perlite for aeration, and either sphagnum peat moss or coconut coir for water retention.

Almost every seed starting mix will have either peat moss or coco coir as their base ingredient. They both provide the water retention that young seedlings need, and don’t have too many differences when it comes to that property. But there are other factors you may want to consider.

Peat moss has come under fire for being less sustainable than other options like coco coir due to the fact that it is mined from bogs and is thus non-renewable. The management of these bogs is pretty good though, almost to the point of peat moss being classified as a renewable resource these days.

Learn more: What is Peat Moss?

Coconut coir is growing in popularity as both a base for seed starting mixes and in hydroponic use due to how similar it is to peat moss. It can retain over eight times its weight in water, making it fantastic in seedling mix. Better yet, it comes in dehydrated and compressed bricks, making it easy to ship!

Both perlite and vermiculite add aeration to your seedling mix, making them essential ingredients for young seedlings struggling to establish themselves.

Perlite looks like tiny white puffy balls. It’s a natural material that is extremely lightweight, making it great in seedling mixes, but only in small amounts. If you use too much, it’ll just blow away!

Vermiculite is also a naturally-occurring material but has a flaky and reflective appearance. It provides less aeration than perlite, but more water retention, making it a good choice if you have less water retention in your base of coconut coir or peat moss.

Diatomaceous Earth is sometimes added to seedling mix. If you’ve never heard of it before, don’t worry — I hadn’t either when I started gardening. It’s a mineral that is made up of fossilized plants called diatoms. It has the unique property of destroying almost all insects that could bug your little seedlings, which is why it’s added to seed starting mixes.

While seed mixes are usually sterilized by the manufacturer, it’s a good idea to add a bit of diatomaceous earth to the mix just to give your seedlings a better chance at survival.

The debate around organic vs. conventional produce is still raging, but does it apply to seedling mixes as well? Make no mistake, manufacturers of seedling mixes are responding to the increased demand for organic and putting all sorts of organic seedling mixes on the market.

When it comes to seedling mix, my personal opinion is that it doesn’t matter much if you choose organic vs. conventional. Think about it – you’ve got peat moss, coco coir, perlite, and vermiculite making up the majority of the ingredients. Most of these are naturally-occurring materials that by definition are “organic” because they’re minerals. They can’t be produced in a more organic manner than they already are!

If you decide to buy an organic mix, make sure it’s certified organic.

Because all of the ingredients in seed starting mixes have different pH levels, manufacturers often add lime to adjust the pH of the overall mix to a level that is perfect for young seedlings.

In general, your seedlings will do well with an acidic pH level between 5.5-6.5. Keep in mind that adding anything to your seedling mix will affect the pH of the entire mixture, so be careful what you add!

Espoma makes a fantastic seedling mix that is around 80% peat moss. The rest of it is made up of humus, perlite, earthworm castings, and lime.

On top of that, they add in ‘Mycotone’, which is a combination of many different beneficial mycorrhizae, which help promote root growth.

This is my go-to seed starting mix if I’m growing in soil and not making my own mix.

I know that this recommendation is kind of cheating, but if you want a soilless seed starting mix, Rapid Rooters are honestly the best choice. I use these all of the time, especially if I’m starting seeds for hydroponics.

However, you can also use these if planting in soil and they make for extremely easy transplanting. All you have to do is just pick them up and plop them in a pot or in the ground. There’s no need to carefully hold the soil together as you transplant.

Other Good Options From Amazon:

If neither of these options strikes your fancy, here are a few other seed starting mixes available on Amazon that I have personally used and recommended:

Jiffy Organic Starter Mix, 16qt – a classic organic option from one of the biggest gardening suppliers out there.