With so many indoor grow light options, especially in the LED market, it has become really confusing to figure out which grow light to buy.

And when it comes to buying a full spectrum LED grow light, not all LEDs are built the same way. You need to pay attention to both the quality and quantity of light a fixture produces if you want to understand real power that LED grow lights can deliver to your canopy.

This will be somewhat more technical than the usual article, but bear with me. By the time you’re done reading this article you should feel confident enough to make your own choices.​

If you don’t really care about the technical details and just want my recommendations, I’ve listed them below this paragraph. Otherwise, read on and dive into the world of lighting with me.​ 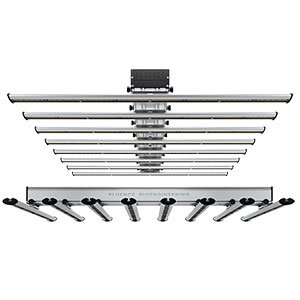 It’s not cheap at $900, but the Fluence SPYDRx is by far the best full spectrum LED system on the market right now. You’re won’t find a better LED setup for the money. California Lightworks is one of the most reputable manufacturers.

The Meaning of Full Spectrum, PAR and How Plants Use Light​

Full spectrum is a common term that many lighting companies use to promote their particular model of LED fixture. Usually they reference the Chlorophyll A and B absorption spectrum chart, which you may be familiar with. I should probably point out that they probably didn’t know that such a chart is only valid for extracted chlorophylls and not for the living leaf itself. But that’s another story.

The plain truth is this: as of right now, there is no spectrum available that will allow a 100w LED to replace a 1000w HID. This is because it focuses on chlorophyll absorption. And although plants certainly do have multiple pigments and photoreceptors across the PAR range, nothing will beat delivering just the right light quality and quantity to your plants.​

As a grower, I’ve been comparing how powerful my grow lights were by using a lux meter. A lux meter is a device that measures the density of luminous flux (lumens) at a certain point from the fixture. The problem is that when it comes to measuring grow lights for plants, I should have been using PAR all along. And thus a PAR meter.​

Just in case you don’t remember, PAR stands for “Photosynthetically active radiation.” It refers to the spectral range of light from 400 to 700 nanometers that most plants use for the process of photosynthesis. For our purposes the difference is that a PAR meter measures intensity of light within the whole spectrum. While a lux meter (lm) is usually calibrated only for the brightest light wavelengths that we humans can see, where white and yellow light are seen as the most intense, while ignoring other wavelengths like blue and red which are also very useful for plants.​

For more information, read my article on how light affects plant growth.

So then, what does “Full Spectrum” really mean?

Should the term even be used? Well, when a company decides to call their products a Full Spectrum Grow Light, they usually mean that their product outputs a broad, continuous and significant light across most (if not all) of the PAR range. That’s it. In fact, remember this: “Full Spectrum” as a term, is only as reliable as the Grow Light manufacturer. It is by no means a certification standard; whether legal, industrial or otherwise.​

The fact is: as of right now, LED grow light technology is moving away from using specific bands and instead the industry is focusing on providing the broadest possible spectrum. You can see this if you noticed that most reputable LED companies are moving away from pink/purple lighting and replacing their LEDs with “white” chips.​

These white chips are produced by a phosphor-coating method, where the coating is deposited on the LED die. The exact shade or colour temperature of white light produced is determined by the dominant wavelength of the blue LED and the composition of the phosphor. And the thickness of the phosphor coating produces the variations in the colour temperature of the diode.​

Alright! Now that we know how today’s top notch LED grow lights are made, we can talk about the “best spectrum”.​

The perfect grow light would be one that replicates the spectrum of our sun, while allowing us to adjust the light intensity to our exact needs. This would be the pinnacle of “Full Spectrum.”

For our intents and purposes, the Sun’s radiation spectrum is very evenly spread and peaks in wavelengths around the PAR spectrum.​

While plants certainly can use some of the light wavelengths outside the PAR spectrum, the light that falls outside of this range is usually either too powerful or too weak to be of primary use for photosynthesis.

As an example, with certain exceptions UV light is too destructive to be used to synthesize large molecules, and infrared on the other hand is relatively weak, and produces a lot of heat. By comparison, within the PAR range each photon contains just enough energy to excite the electrons of molecules without causing damage to the cell.​

So, how should the perfect spectrum be? How much of every color do plants need?​

Luckily, science has the answer. It turns out that a publication by McCree (1972) figured all this out for us and published a chart similar to the following one:​ 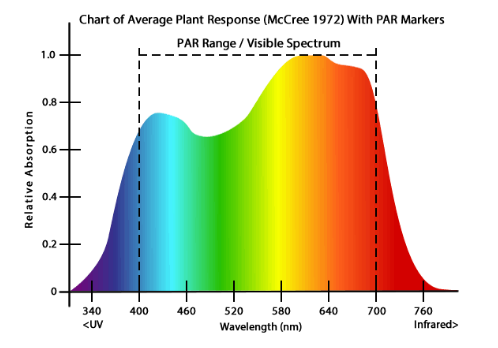 To absorb light, plants use a somewhat primitive but highly effective version of our eyes, which we call pigments. The most abundant plant pigment is chlorophyll and it is most efficiently used to capture red and blue light. Other than those, there are many other pigments, including carotenes and xanthophylls which harvest light in other wavelengths and pass it on to the photosynthetic process.

It should be pointed out that green light actually penetrates deeper into the leaf interior than red light and can drive photosynthesis more efficiently. This is because the top layer of the chloroplasts that contains chlorophyll becomes saturated while green and yellow can penetrate deeper into leaf tissue and be reflected around until absorbed by another chloroplast containing chlorophyll or by an accessory pigment.​

Now that you understand the science behind full spectrum LEDs, here are the most important factors you need to consider when you are deciding which to buy.

Right now, full spectrum LED grow lights are expensive. The costs of setting up a system that depends on these lights can be more expensive than standard HPS or HID setups.

However, you will save a lot of money in the long run due to the efficiency of LEDs vs. HID lighting. For example, the average lifespan of an HPS bulb is around 10,000 hours. Compare this to a 50,000 hour lifespan for LEDs and you can see the cost savings you’ll accumulate over time.

You can run a full spectrum LED setup for 15 YEARS before you need to consider replacing it. So, in short: if you can afford the initial setup cost, you’ll thank yourself in the long run.

Most HID or CFL lighting setups are bulky and cumbersome. This isn’t necessarily bad, but if you’re trying to grow in a smaller space it can make it difficult. Full spectrum fixtures are relatively small and don’t require ballasts or reflectors, freeing up space in your grow tent or grow room.

Light and heat are forever intertwined. The temperature of your grow room is a vital variable, and grow lights are one of the biggest contributors to rising temps. It’s why grow room ventilation is so important.

Full spectrum LED lights don’t really have this problem though. Some growers actually have to heat their rooms artificially during colder months due to how low the heat output is from this type of lighting. That means that if you’re growing in a warmer climate, you won’t have to worry about overheating your grow room.

If you’re reading this article, chances are good that you’ve already decided to go with a full specrum LED setup vs. some of the other lighting options out there. However, it’s still valuable to do a quick compare and contrast against the other lighting technologies.

In general, HPS edges out full spectrum setups on cost, but loses in heat output and ability to grow through a plant’s life cycle.

In general, MH is good for vegetative phase and costs a bit less, but puts out a lot of heat and doesn’t work well for a plant through it’s entire life cycle. If you’re growing only vegetative plants though, it can work well.

CMH lights are the best HID contender vs. full spectrum LEDs. They put out a good spectrum of light and cost about the same as a full spectrum fixture. It’s a toss up here.​

CFLs, while efficient, are best used for the vegetative growth phase of a plant. This is because they generally don’t put out a high enough intensity of light in the right spectrum for plants to do well during flowering phase.​

The Fluence SPYDRx is what you get when a company takes the full spectrum LED hype and actually applies rigorous scientific testing and quality manufacturing processes to it.

It’s one of the coolest looking LED systems I’ve ever personally seen, and aside from that actually performs at a high level.

Final Take: If you have the money to shell out for a top of the line full spectrum setup, you will not find a better price to value than the Fluence SPYDRx.

California Lightworks is a reputable manufacturer in horticultural lighting and has been putting out quality LED systems for a while now. While it doesn’t win as many “flashy” points as my best overall pick, it’s a very solid full spectrum LED setup that will get the job done for most plants that you’re looking to grow.

Here’s the breakdown of the spectrum:

Final Take: If you want a solid, well-made and well performing LED system that won’t break the bank, go with the CLW Solarstorm 440.