Best Compost Tumblers and Bins in 2022

There’s nothing more beneficial for your garden than the addition of good quality compost. Because composting itself is relatively easy, lots of people do it in a wide variety of ways. Today, we’ll focus on the best compost tumbler for your money. These are sometimes called batch composters.

The Good Ideas EZCJR-BLK is part of their Compost Wizard series of tumblers, and the smallest of the series. It’s a single-chambered tumbler that rests on a hollow base to collect leachate, and the base also has rollers that make turning it easy. It has a 7 cubic foot capacity that will handle the waste generated by an average household. It’s recommended to set the tumbler on a couple of concrete blocks or bricks to aid in draining off leachate as needed. It arrives fully assembled, just set it outside and start filling.

The drawbacks are that it is a single-chambered tumbler, so you have to stop adding new waste once it’s almost full and wait for your compost. While you wait, turn it regularly, and unless you have a stationary composter or another alternative, you’re producing waste again. It also has smaller doors than some models. But overall, it’s a solid choice for most people. 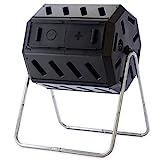 The only things which kept the Yimby from being best overall were that you can’t fit a standard shovel inside to remove the compost, it doesn’t have a compost tea collector, and that it tends to collect garden spiders in the molded plastic exterior. The last one is something I know from personal experience, as I use one! While garden spiders are common everywhere, some people do like to collect and use their compost tea as fertilizer on their non-edible plants, so if you want to collect compost tea, this is not for you.

But otherwise, the Yimby is one of the best tumbler composters I’ve ever used. It requires assembly, but when constructed, you end up with a well-designed dual-chamber composter. It has a sliding panel that can access both chambers, and the panel can be flipped around to indicate which side is cooking compost and which side is available to add to. When assembled, it’s 36” tall, 25” wide and about 22” deep, with each chamber being roughly 12” wide inside. It’s priced quite reasonably and is a great choice.

Let’s start with the good parts: this tumbler features dual chambers, allowing you continuous composting capability. It has built-in handles that allow you to turn it easily, plus it rests on a compost tea-collecting base that can hold up to five gallons. The base has rollers built in to assist with turning the compost. Overall, it works and does what it’s supposed to.

However, there are a few major drawbacks to this system. The two hatches are quite small at only 7” wide, so you can’t fit a shovel inside for quick removal of compost. While that’s fine in a smaller unit like the other Compost Wizard mentioned earlier, this should have easier access. The base also has a tendency to slide around when you try to turn your compost.

Recently, I’ve seen scattered reports of people who’ve gotten theirs and discovered it was cracked on arrival, which may mean that a bad batch is on the market right now or that it was mishandled in transit. Inspect this composter thoroughly when you receive it if you buy it!

What Is A Compost Tumbler?

In its simplest form, a compost tumbler is a container that can be turned to “tumble” or mix the compost that’s being generated inside. There’s a wide variety of tumblers available on the market today. Most tumblers share a few key features: they are opaque and darkly-colored to help build heat inside, they have either one or two chambers inside in which you place both green and brown compostable materials, and they can be turned in some way to blend and mix the contents.

Why Use A Tumbler Vs. Other Composting Methods

Often, people turn to a compost tumbler because they’ve read an advertisement promising compost in two weeks or less. While that can be true in the most optimal of conditions, getting those perfect conditions can be tricky and it generally takes longer. So why should you use a compost tumbler instead of just a compost pile, or a bin, or any other method?

Ease of Turning Your Compost

A “hot pile” method of composting is building a pile that generates heat. The heat sterilizes the compost, killing weed seeds and possible pathogens in the compost and rendering it safe for use in your garden. But you have to turn the compost to aerate it and mix it even when it’s in a stationary composter, which can be a laborious task. With a compost tumbler, it’s super-easy to mix your compost, keeping it well-aerated at all times. I spin mine a few times a week, more if I’m adding a lot of material, and it takes a couple of moments rather than 15-30 minutes of solid work with a pitchfork.

In the winter, the composting process can slow down due to a lack of heat. While a stationary composter can offer some insulation, many types of tumblers can be brought inside a garage or shed during the cold months and still used as normal, producing regular batches of compost in preparation for the spring. If your composter doesn’t have a compost tea collector, be sure to put something underneath to catch drips. You can also switch to bokashi or vermicomposting in the winter, but that requires another composter and a different process.

Because it’s a fully-enclosed container, tumblers also heat up more readily during the warmer months and maintain that heat well, and that warmth kills off any weeds or pathogens that might otherwise appear in your compost.

As long as you have a good compost thermometer to keep an eye on your heat levels, your tumbler should be just fine.

In a traditional compost pile, the only way you can keep excess moisture (like snowmelt or heavy rain) out of your cooking compost is by throwing a tarp over the top. Stationary bins have a lid, but the base is typically open to the soil, letting any leachate drain off. Tumblers, by their nature, are at least partially protected from the elements, and many have a collection area to catch the “compost tea” or leachate that’s generated from your kitchen waste so you can use it as a fertilizer source for your non-edible plants.

When you get right down to it, a compost pile is just that – a pile. Whether it’s contained in a frame or just heaped, it’s still a pile. Tumblers contain the compost in one specific spot and out of sight, so you don’t see decomposing plant materials in the yard and the pile doesn’t gradually spread.

You may discover a raccoon, deer, or even the neighbor’s cat has invaded the compost pile looking for an easy meal. Tumblers keep most animals at bay. While a few may still try to get in if something smells really appealing (bears being the most commonly known to do this), most just move on by.

By far, the most common tumbler style is a horizontally-mounted barrel design. Some are round, some have multiple sides. Many have molded or indented handholds to use for turning the compost, although a few rare ones have special handles. Some rest on a specialized base, and others are mounted on a center post which runs from the ends straight through the entire length of the composter. These typically have an access hatch on one or more sides.

But that’s not the only style of tumbler on the market. Another style is the vertical barrel. While these are also barrel-shaped, they’re mounted on a stand vertically with a central post running through the sides, and with the hatches at the ends of the barrel. This style tends to break up the compost more easily as it tumbles end-over-end from a greater height, but some report it to be a little harder to turn when full.

There have been other varieties of tumbler on the market in the past, including a spherical variety, but most of those appear to have had problems that make them not ideal.

How To Use A Compost Tumbler

Using the tumbler itself seems very simple – just put stuff in it and spin it, right? But even the best compost tumbler takes a little bit more management than that. You need a good ratio of brown and green waste.

Brown waste is dried and occasionally material from plants, and includes such things as wood chips or pellets, cardboard, old newspaper, dried leaves, and the like. Brown waste tends to be carbon-rich and absorbent, and provides bulk to your finished compost.

Green waste consists of fresh materials such as vegetable and fruit peels and rinds, apple cores, coffee grounds, fresh leaf or lawn clippings from your yard, manures, and so on. Green waste has a lot more moisture and tends to be nitrogen-rich. The moisture can produce “compost tea” or leachate.

Getting the perfect mix of browns and greens can take a little bit of practice. I find that when I’m using a compost tumbler, if I use one kitchen compost pail of green waste to two pails of brown waste by volume (not weight), it’s about perfect. However, you have to keep an eye on the contents of the tumbler and adjust as needed.

If there’s a bad smell coming from the tumbler or the contents look mushy or soggy, you need to add more carbon-rich browns. If it develops maggots, you also need brown waste – and you need to keep the flies out unless you want maggots there. But if it looks really dry or doesn’t appear to be composting at all, you need more nitrogen-rich greens.

You can add a compost starter to your tumbler to kick off the composting process, and I recommend doing so when you have a brand-new tumbler. Compost starter contains the microorganisms that naturally form over time in a compost bin, so it speeds up the process significantly at the start. After that, it isn’t necessary unless you’re trying to increase the heat inside your tumbler.

Some people spin their compost tumbler daily, but that can produce too much aeration and inhibit the process of heating up the compost. I spin mine right after adding more greens and browns to get it all well-mixed. If I haven’t added anything to the bin recently, I try to make sure I’m also spinning it every 2-3 days – every other day in hotter weather, every third day in cooler weather. It’s still getting aerated, but the compost has time to heat up and kill weed seeds and pathogens.

So, overall, I can’t help but to love the Good Ideas EZCJR-BLK Compost Wizard Jr. For the average household, it’s the best choice despite being a single-chamber, and the compost tea is invaluable to those who need fertilizer for their flower gardens. It’s also really easy for people who are new to composting as a general rule, or a solid single-batch choice for experienced people.

But I’m personally going to stick with my YIMBY for the continuous flow of waste in and garden goodness out.