Skip to content
Epic Gardening is reader-supported. When you buy through links on our site, we may earn an affiliate commission. Learn more
Composting, Product Reviews

6 Best Compost Bags To Use At Home

But what bags are the best? Is there a difference between biodegradable and compostable? And do they actually break down in your compost pile or not?

I’ll clear up all these questions for you! We’re going to explore the compost liners that’re available right now. Some are meant for municipal use, others are for home gardeners. But you’ll find the right one for your needs by the time we’re through!

The 6 Best Compost Bags For Your Kitchen 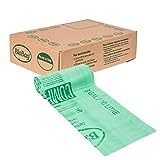 I have to give high marks to BioBag compostable bags. They were some of the first on the market, and are still my personal favorite.

First off, they’re constructed of plant starches, vegetable oils, and compostable polymers. They’re designed in a way that enables them to break down in both home and industrial composting.

But beyond that, they’re just good compost pail bags. They’re gathered at the bottom to seal them. This directs the compost towards the center of the pail and allows for a more complete fill of your bin. And they’re sturdy, comparable in strength to plastic.

Very few manufacturers take the time to have their bags certified. These are certified compostable bags in both America and Europe as compostable. They also meet OK Compost HOME requirements.

I’m not going to claim that these will last in the kitchen bin for weeks and weeks as you slowly collect materials. They won’t. But if you take them to the pile often, you’ll find that these are a great option for you.

Need something a little bit sturdier? Bag-To-Nature compost bags are designed for municipal composting. With these, you collect your kitchen waste as normal. Once you’ve gotten your bin filled, pull this out and tie the corners, and drop it in the municipal bin.

Because these are heavier in weight, they don’t break down as fast. They’re really not meant for home composting, although they can be. It’ll take a whole lot longer than thinner bags would, though!

If you’re in a community that has a municipal compost collection system, these are perfect. They’ll put the entire bag and its contents straight through the hot compost process. 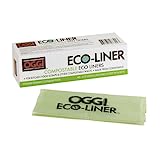 Extremely thin, the Oggi compost bin bags are made out of cornstarch. And yet they still do well in most typical usage.

The biggest drawback of these is that you can’t leave them in the bin for too long. The cornstarch will start to slowly melt when exposed to moisture. You’ll need to tote them out to the bin often.

On the flip side of these, they do in fact break down in most worm bins. It’ll take a while before the worms take notice and start to nibble on the bag itself, but it will happen!

If you’re using Oggi bags for your worm bin, be sure to puncture the bag once it’s in the bin for good worm access. Leave the top open as well. It may be there for a while, so be prepared for that. You may have to screen out bags and bag pieces from finished compost for a while. 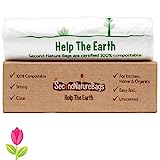 Are you trying to bring home coffee grounds from the office? Looking for an option that’ll hold up long enough to get it home without making too much of a mess?

Second Nature compost bags are heavy-duty. They’re guaranteed to break down in roughly 26 weeks, so they’ll be around for a bit. If they’re in a hot compost pile, they’ll break down quicker.

But those of us who want to be eco-friendly at work as well as at home are going to love these bags. They’re sturdy, constructed of a mix of sugar cane and other plant fibers, and worth your money.

Much like the BioBags, the Unni compostable bags are also certified compostable. They’re also rated for home composting, which makes them great for gardeners.

Slightly heavier than BioBags, the Unni bags are going to decompose a bit slower. The upside to this is that they’re a bit sturdier, but only slightly.

One of my favorite parts of Unni’s bags is that they offer larger sizes. If you’re looking for a temporary storage solution for leaves in the fall, this may be exactly what you need. They’ll eventually break down with the leaves, and it all becomes compost in the end!

NorPro compost bags have one major downfall. In their printed material, they state their bags aren’t suitable for backyard composting. They’re meant to be industrial-composting only.

They’re lighter-weight than other industrial compost bags. It’s best if they’re used for smaller batches of compost. The bright side to these is that they’re often available in many supermarkets. If you can’t order compostable bags online, this can be a real benefit.

I would recommend pretty much any other bag I’ve covered today before I’d recommend these. Beggars can’t be choosers, though — and these are still far better than plastic bags. If you’re unable to get any of the others, these will work for you.

What Is A Compost Bag?

Simply stated, a compost bin liner or bag is used to line your countertop compost bin.

But not all are created equal. For instance, you wouldn’t want to use normal plastic bags, as these don’t decompose. They’ll need to be thrown away.

While some bins have inner liner pails, not all do. And if you’re squeamish about decomposing veggies, you won’t want to scrape out the inside of your bin.

Manufacturers have stepped in with bin liners as a sustainable alternative. It’s quick and easy to remove one of these and toss it into your tumbler composter or compost pile.

There are other forms of bags than just compost bin sized! Compostable trash bags are starting to become more popular. So are biodegradable trash bags. Even compostable dog poop bags are available. But for today, we’re sticking with the ones that go in the kitchen bin.

Biodegradable or Compostable: What’s The Difference?

There’s a wide variety of eco-friendly bags available now. So what’s the difference between them? Some are biodegradable, others are compostable. Isn’t that the same?

Biodegradable means that it will, in time, break down and compost in a landfill situation. It’ll take a while, but eventually it’ll become soil. These are usually best used to hold stuff you’re placing in the trash bin.

In contrast, compostable means that it breaks down fast in certain conditions. Usually, these conditions require an industrial composting facility. But there are variations which are meant for home composting use.

So which is better for the home composter? It depends on the bag and what it’s constructed from. Most bags made of cornstarch or plant fibers will break down in home composting. It may take longer than you expect, so be prepared for that. A hot pile speeds the process up.

As a general rule, stick with compostable bags for home use, and biodegradable ones for your trash company. Both are better alternatives to standard plastics, but only a few break down in your compost pile.

These bags aren’t without their limitations, though. Let’s talk about those!

Two things decompose compost bags quickly: moisture, and heat. While it’s unlikely that your kitchen waste will heat up before you take it to the compost pile, it can happen. Plus, fruit and veggie scraps may be moist.

You’ll need to swap out your compost liner bag regularly to prevent it from becoming weak and tearing. Most people will change it out 2-3 times a week, depending on the amount of waste. If you generate kitchen scraps quickly, it may be even more often.

One of the biggest issues that home composters have discovered is that tying off the bag is a no-no. Like a plastic bag, it’s meant to keep stuff inside. Unfortunately, it can also prevent microbial life from getting in if it’s tied tightly. It’ll take longer to break down that way.

Most kitchen scraps are green waste, and without browns, waste doesn’t evenly decompose. That’s another excellent reason to rip open your bag… it allows intermingling of browns and greens.

One big failing: you usually don’t want to add these to your worm farm. While they won’t hurt the worms, it will take a long time for the bacterial and microbial life in the bin to break down the bags. The worms won’t show interest in them until they’re already falling apart.

Finally, some bags still have a tendency to leak moisture. Place a couple paper towels in the bottom of your bin to soak up any condensation or drips. You can then add those to the compost when you take the bag out.

In conclusion, any of these bags are a major step up from using non-renewable plastic. Depending on your needs, there’s a variety to choose from. But I personally recommend the old standby of BioBags, as they’re reliable and proven to work.