While you might not need a bug zapper year-round, it’s a necessary device in most areas. Flying insects such as mosquitos and flies become irritating as summer approaches. It’s natural to reach for a fly swatter so those flying insects meet their end.

But, what about bug zappers, and which is the best bug zapper to buy?

Continue reading, we’ll examine how these insect zappers work and discuss the efficiency and different kinds that are widely available. We’ll go over some of the pros and cons of each type. Then I’ll narrow it down to the best options based on your exact needs.

It’s hard not to sing the praises of the Flowtron electronic insect killer. With up to an acre of coverage (43,560 square feet) this thing kills bugs like a dream. It comes with an Octenol attractant that lures in mosquitos, and its UV light bulb does wonders at drawing all manner of other flying critters.

Fair warning, though: the Flowtron really does draw all sorts of bugs, so if you want to relax in your yard, you’ll want this at least 25-30 feet away from where you plan to be. Otherwise, you may find yourself surrounded by all of the bugs who’re being enticed by the attractant or the light bulb. Suddenly, you’ll discover you’re on the mosquito’s menu too!

Seriously, though, if you have a large outdoor space, this is perfect for you. There are models which have half-acre coverage or less as well, if you’ve got less space to cover. The Flowtron will keep the pests away from you so that you can properly enjoy stargazing in your yard without being eaten alive. 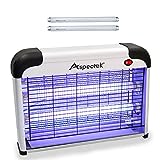 This specific Aspectek indoor model is the one that I find myself using the most often, and for good reason: it works. Made in a horizontal light style, it is boxy and visually not much to look at, but for sheer functionality, it’s worth its weight in gold.

The Aspectek has an outer shielding that protects you from accidentally touching the charged mesh within. Its pair of bulbs are replaceable when they burn out. A catch tray on the bottom captures most of the flying insects, although I do find that some escape containment. Because of this, it’s best to place this in an area that is easy to clean up.

For me, this is the best indoor bug zapper, but it will win no awards for its visual appeal. If you want something stylish in your house, there are other options out there. But if you want better results than a fly swatter, get this. 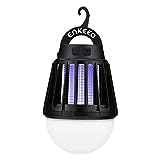 Extremely portable, the Enkeeo is designed for people who love the outdoors. Easily hung inside a tent while camping, this model can act as both a traditional light source or a mosquito-killing machine. Completely waterproof, you can easily rinse off any insects it’s killed. It’s lightweight and easy to carry in your gear, yet has sturdy construction.

Enkeeo promises 15 hours of uninterrupted mosquito-killing time on its zapper setting, or up to 20 hours of light when used as a standard lamp. If you’re looking for a battery-operated model, this is the best for your money. 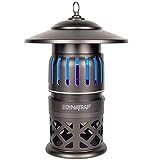 If you have a problem with your bug population, this insect trap is a great way to go. DynaTrap’s insect trap catches mosquitos, moths, biting flies, stink bugs, and a whole host of other pests within its lured confines.

For the nighttime insects, a glowing UV light will draw them steadily closer to the trap. Once in range, a CO2 producer will entice insects to come right up to the trap, and then its whisper-quiet fan will suck them straight inside.

But it’s not only meant for nighttime pests! This also works well on daytime pests, and can easily suck in wasps and hornets, yellow jackets, and Asian beetles, ensuring that you’re at no risk of being bitten or stung no matter when you’re outdoors.

You will not have that satisfying ZZZZZZZT! sound notifying you of the insect’s demise, alas. That’s not the nature of a silent killer like this trap. However, you will have the satisfaction of knowing that no matter what, the bugs won’t bother you. And that’s a plus. 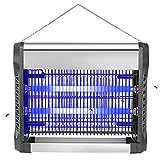 Similar to the Aspectek, the Loytio is a horizontal bulb model. I’ve owned one of these in the past as well, and for me, the real difference between the two comes into play if you plan on hanging it.

Where the Aspectek has hanging hooks on the outsides of the unit, the Loytio has them on top of the unit. It can more easily tilt on its chain than the Aspectek does. If you plan on hanging up your device, opt for the Aspectek model.

But if you tend to set yours on a flat surface as I do, you’ll find that the Loytio is just as functional as the Aspectek. It’s also cheaper in terms of pricing. Both kill bugs equally well. The only caution I have is how it hangs.

How Does A Bug Zapper Work?

These gadgets are actually super simple. They’re made up of a few parts:

Occasionally, there are a few additional lure components to try to assist in drawing insects near.

When the light or other attractants catch the attention of an insect, it will move towards the light or attractant. This means it will go through the exterior housing and try to reach the light. The metal grid then electrocutes the bug.

Many zappers have catch trays to hold dead bugs that have been killed by the device. This makes cleanup of the dead insects easy.

Do They Actually Kill Bugs?

That depends on the type of insect that you’re trying to zap, actually!

While flies and moths are easily lured by ultraviolet light, some insects are less interested. Often, we buy a zapper to deal with more than just flies. For me personally, mosquitos are also of concern. While they can be interested in the light, mosquitos tend to be more attracted to the smell of human sweat, or possibly carbon dioxide from your breath.

Because of insects that are drawn for alternate reasons, zappers nowadays often include pheromone lures or carbon dioxide emitters in addition to the light. That way, they will catch a wider range of insects. Finding a mosquito zapper with one of these added lures will work better overall.

There’s only one thing to be concerned about: many beneficial insects can be lured by that tantalizing UV light as well. Since many insects use UV markings on plants to know where to go, light is like a beacon, just luring them closer. And, well, ZAP. It’s good to be mindful of the placement of your zapper to avoid harming your beneficial insect population.

There are a few key styles, so let’s go over some of the most common types.

These are typically large, boxy units intended for indoor use. A large mesh grid covers the two largest sides, allowing insects to enter and get zapped. There’s a number of different models on the market, but the most effective ones are in the 20-watt range.

As the light bulb placement in these is vertical, this style of zapper is more easily made waterproof and thus can be used in indoor-outdoor settings. Many of these have plastic exterior housing that protects the user from accidentally touching the charged metal grid inside. Because of the light placement, these can be made to look like lanterns or other more stylish light styles, instead of looking boxy and plain.

Made to fit into a standard socket, this is a light bulb that also has a zapping component. Typically, these are intended for use in a sheltered location out of the rain, as they don’t have any additional protection. These are often used as a combination porch light. While they don’t offer much light for us, they do help kill off insects in their placement area.